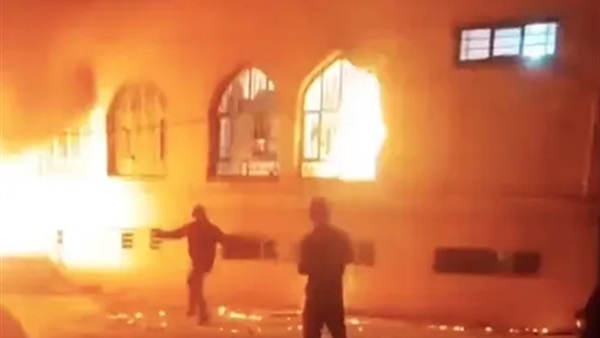 Protesters in Iran have set on fire the ancestral home of the Islamic republic’s founder Ayatollah Ruhollah Khomeini as two months of anti-regime demonstrations show no let up.

The house in the city of Khomein in the western Markazi province was shown ablaze late on Thursday with crowds of jubilant protesters marching past, according to images posted on social media, verified by AFP.

Khomeini is said to have been born at the house in the town of Khomein – from where his surname derives – at the turn of the century.

He became a cleric deeply critical of the US-backed shah Mohammad Reza Pahlavi, moved into exile and then returned in triumph from France in 1979 to lead the Islamic revolution.

Khomeini died in 1989 but remains the subject of adulation by the clerical leadership under his successor, Ayatollah Ali Khamenei.

The house was later turned into a museum commemorating Khomeini. It was not immediately clear what damage it sustained.

Iran’s Tasnim news agency later denied there had been a fire, saying the “door of the historic house is open to visitors”.

“The counter-revolutionary media tries to create turmoil by spreading lies and false information. The burning down of Imam Khomeini’s historic house, a place with spiritual value to Iranians, was one of those lies,” the deputy goveronor of Markazi province, Behnam Nazari, was quoted as saying.

The protests sparked by the death of Mahsa Amini, who had been arrested by the morality police, pose the biggest challenge from the street to Iran’s leaders since the 1979 revolution.

They were fuelled by anger over the obligatory headscarf for women imposed by Khomeini but have turned into a movement calling for an end to the Islamic republic itself.

Images of Khomeini have on occasion been torched or defaced by protesters, in taboo-breaking acts against a figure whose death is still marked each June with a holiday for mourning.

On Friday, mourners at the funeral of a young boy whose family say was killed by Iranian security forces chanted anti-regime slogans and ridiculed the official account of his death.

Hundreds of mourners flocked to the city of Izeh in south-western Iran for the funeral of Kian Pirfalak, according to footage posted online.

His mother said at the funeral ceremony that Kian was shot on Wednesday by security forces, although Iranian officials insisted he was killed in a “terrorist” attack carried out by an extremist group.

“Hear it from me myself on how the shooting happened, so they can’t say it was by terrorists because they’re lying,” his mother told mourners, according to a video posted by the 1500tasvir activist Twitter account. “Maybe they thought we wanted to shoot or something and they peppered the car with bullets … plainclothes forces shot my child. That is it.”