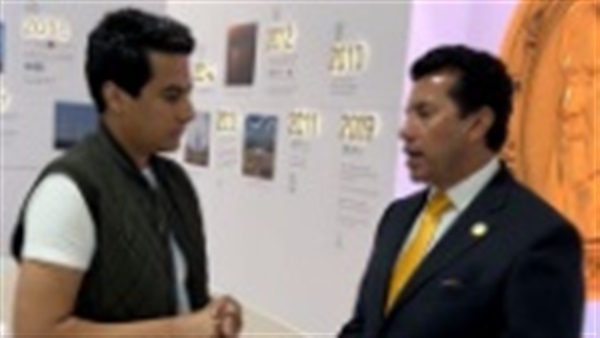 Minister of Youth and Sports, Ashraf Sobhi, has described Egypt's hosting of the climate summit, COP27, as a 'major achievement'.

All cabinet ministries, the minister said, co-operated so that the summit can be organized in such an impressive manner.

He told al-Bawaba News in an interview that the current generation of young people is fully aware of the importance of climate issues and their impact on their day-to-day life.

The minister pointed out that youths' involvement in these files is both good and important.

He noted that COP27 stresses the aspect of implementation which it comes to climate action.

He expressed confidence that the international community would act on climate change soon, through a series of new decisions and agreements.

Here is the full interview al-Bawaba conducted with the minister:

Sir, how do you see Egypt's organization of COP27?

What was achieved was great. We thank all the youth who contributed to the organization of this great event. I am talking here about combatants. Five non-governmental organizations co-operated with youth in this regard. The Ministry of Youth and Sports prepared for this event six months ahead. We worked day and night. We co-operated with the Ministry of Environment and the Foreign Ministry to prepare for this conference in Sharm el-Sheikh.

How can youth play a pivotal role in this summit?

We have worked day and night with Egyptian youth to prepare for this summit. The world's youth play a pivotal role in climate action and to create a better future. Young people must be included in decision-making. I am very grateful for this co-operation from the United Nations and all those present here at the conference for their wonderful work and constructive co-operation.

Do you think the current generation of young people is fully aware of the climate issue?

There is current and future interest in preserving this planet. The presence of the Ministry of Youth and Sports at the summit is a great honour. Egypt succeeded in organizing a large number of international events in recent years. I think this generation of young people is a strong point in confronting climate change. It knows well and understands the meaning of this issue.

A youth and children's pavilion was set up on the margins of the climate summit, for the first time. How do you see this?

This is actually the first time in the history of COPs for this pavilion to be set up. This comes within the framework of the Egyptian presidency's great interest in the importance of involving young people in climate action.

There was a Youth Day at the summit. How did your ministry deal with it?

The ministry was responsible for organizing the Youth Day in in November. Seminars were held with the designated authorities and in the presence of officials, including the heads of government, to discuss several issues related to climate change. I am very glad that Egypt hosted the climate conference.

What are the most important issues that have been discussed these days?

The visions of youth in the future and present of climate change, interaction and dealing with it were discussed. This is part of the vision and strategy of the Ministry of Youth and Sports about that. The youth conference took place over three official sessions. There was great appreciation for the Egyptian role and the role played by youth. We are pleased with this momentum and this large gathering in Sharm el-Sheikh.

COP27 is known as an implementation summit. How do you want to achieve this on the ground?

The fact is that the efforts exerted over the past days, the large international representation and the rich sessions of the conference strongly indicate that there is a real intention to take serious and effective steps in this matter. I imagine that this summit has received great and very important attention.