Ukraine Moves Forward in South, With Little Resistance From Russia 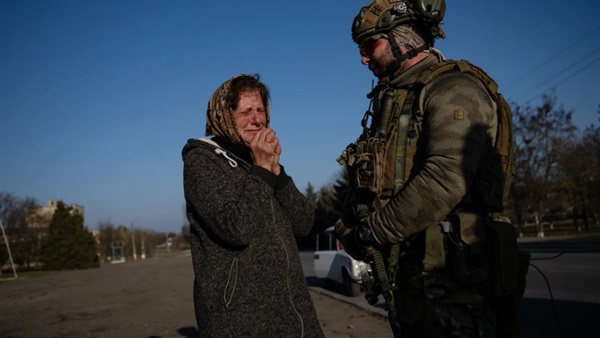 The Ukrainian soldiers inched forward in their pickup truck, weaving between burned Russian military vehicles, keeping a lookout for mines and pushing deeper into territory vacated by the Russian Army just a few hours earlier.

On Thursday, a crystalline fall day, the soldiers drove uneventfully into town as the few remaining residents stood on the roadsides, waving and crying.

“We were waiting for you for so long!” a woman yelled. People milled about, staring at the soldiers, who wore yellow ribbons around their arms to identify themselves as Ukrainians. “We are so happy.”

The Ukrainian Army is moving cautiously into areas abandoned by Russian troops along a front line in the Kherson region of southern Ukraine, a day after Russia’s defense minister announced a retreat from the western bank of the Dnipro River, in the latest significant setback for Russia’s military.

President Vladimir V. Putin in September declared parts of this region Russian land, in a claimed annexation rejected by Ukraine and its Western allies. The largest city, Kherson, is a symbolic and strategic prize in the war, the only provincial capital seized by Russia after its invasion in February and a key to controlling Ukraine’s Black Sea coastline.

Ukrainian soldiers are advancing into heavily mined towns and villages, and navigating around bridges the Russians blew up to cover their withdrawal. Heavy fighting continues in some places.

But the Ukrainian advance without a fight into Snihurivka, an important  hub north of Kherson City that was abandoned overnight, indicates the Russians are, indeed, retreating. Ukrainian officials had initially been skeptical; they feared a ruse in the Russian announcement of a pullback because it followed days of enigmatic declarations from the occupying authorities that clouded their intentions.

On Thursday, Ukraine’s military said it had advanced into 100 square miles of land in the past 24 hours and had reclaimed 12 towns and villages. The push through the Kherson region was real.

“The enemy is regrouping and taking measures to partially withdraw troops to the left bank of the Dnipro,” the military said in a statement, referring to the river’s eastern bank, where the Russian military has been building a fallback line of defenses. Some Russian soldiers were most likely still hiding in Snihurivka, said the commander of a reconnaissance unit, who provided only his first name, Ihor, for security reasons. “We have a goal to capture them or push them out.”

The Ukrainian soldiers moved gingerly through the town, ever cautious of mines and booby traps. At one spot, tire tracks covered an anti-tank mine that had not exploded; it was unclear which side’s lucky vehicle had driven over it.

The Ukrainians have been attacking the retreating forces, the military said. As they break cover and pull back, the Russian soldiers are more vulnerable. The Ukrainian Air Force flew eight sorties, and artillery opened fire more than 100 times over the past 24 hours in southern Ukraine, the Southern Military Command said. It claimed to have destroyed three tanks, five armored vehicles and an ammunition depot. The claim could not be independently verified.

The Russian pullback from the expanse of farmland on the western bank of the Dnipro River comes as a pivot point in the war.

The Ukrainian military, engaging in a scrappy and underdog defense for eight months, has forced the Russians into three major retreats: from north of the capital, Kyiv, last spring; from the northeastern Kharkiv region in late summer; and now from at least portions of the western bank of the Dnipro River in the south.

The government of President Volodymyr Zelensky is hoping the against-all-odds battlefield wins will quiet criticism of Ukraine military aid among some members of the U.S. Congress. Ukrainian officials have also declared their conditions for discussing a cease-fire with Russia, including the removal of Russian troops from Ukraine’s land.

The secretary general of NATO, Jens Stoltenberg, on Thursday praised the Ukrainian Army for its advances in the Kherson region. “What is clear is that Russia is coming under heavy pressure, and if they leave Kherson, it would be another victory for Ukraine,” he told a news conference in Rome. NATO will support Ukraine, he said, “for as long as it takes.”

Even as Russian troops fall back in the Kherson region, the possibility remains that they will vacate only rural areas but retrench to defend the provincial capital, Kherson.

Military analysts have cautioned that Russia could also retaliate by escalating its missile and drone bombardments of cities in a campaign to demoralize Ukrainians by blacking out electrical power. Already, drone and missile strikes have cut power to 4.5 million people.

But out in the expanse of farmland in southern Ukraine, the Ukrainian military has been reaping rewards in a methodical, monthslong strategy of shelling behind the Russian front, targeting bridges the Russian Army had used to supply troops on the Dnipro’s western bank.

Gen. Valeriy Zaluzhny, the commander of the Ukrainian military, scoffed in a post on Facebook Thursday at the Russian’s announced explanation for its retreat, which suggested it was a strategic maneuver intended to save its soldiers’ lives. “Significant efforts of our military are behind the so-called ‘goodwill gesture’ of the enemy,” he wrote. “The enemy was left with no other option but to resort to fleeing.”

Ukrainian military officials said the Russian retreat from towns around Kherson was more methodical and much less chaotic than the withdrawal in September from the Kharkiv area in northeastern Ukraine.

A case in point is the pullback from Snihurivka, where over the past few days several thousand Russian troops left town.

“It was well organized,” said a volunteer commander, Nazar Vytrykush. “They left in convoys over two to three days. They were firing artillery to cover their retreat till the very end.”

The Russians withdrew heavy weaponry and most soldiers from Snihurivka earlier in the week, residents said. But military analysts predicted that even after the Russian defense minister announced that Russian troops were abandoning portions of Kherson, it would take several days or maybe even several weeks to get all the troops out.

Russian Kamaz military trucks parked in a line on Tuesday evening on Oktyabr Street, officials said. By morning, they were gone, loaded with looted goods and soldiers, locals said.

By Wednesday evening, Ukrainian troops were on the western rim of the town, and a firefight broke out, most likely with a rear guard covering the Russians’ retreat, said Ihor, the reconnaissance unit commander.

His group, traveling in armored Humvee trucks with heavy machine guns mounted on the beds, entered the town on Thursday.

“I felt like crying,” Ihor said. “We are bit by bit liberating Ukraine.”

As soldiers drove past, people stood on the roadside and waved. Some ran to the vehicles and hugged soldiers through the windows. One older man cried as he talked to a Ukrainian soldier.

“Don’t ever leave us again,” he said.

Before leaving, the Russians blew up an auto repair shop they had used as a base, sending a spray of cinder blocks across a street. Inside were solar panels, apparently looted from one of the area’s many solar farms, and a heap of beer cans in a trash pile.

Valentine Ivanov, a taxi driver, said he understood the Russians were leaving when soldiers who had stolen his car returned on Tuesday asking for the registration documents. They wanted to sell it in Russia and needed the papers, he said.

Vyacheslav Zavadsky, a retired bulldozer driver, said he had not heard of the Russians’ committing war crimes in Snihurivka, like the instances of torture and extrajudicial killing that have emerged in other formerly occupied areas. But he said the Russians had looted stores and apartments.

“They left at night,” Mr. Zavadsky said. “I woke up in the morning and saw tank tracks on the streets, and they were gone.”