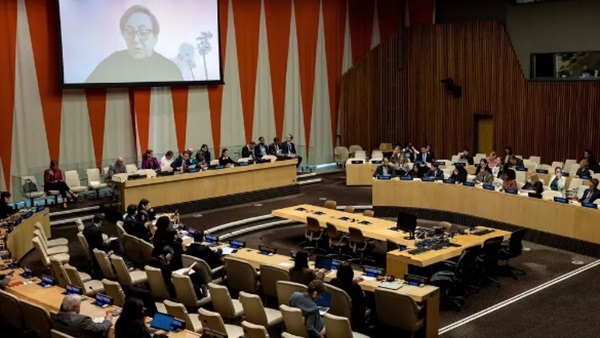 The uprising in Iran, now in its seventh week, arrived at the United Nations on Wednesday with the Security Council holding an informal meeting to discuss the government’s human rights violations against protesters.

Western diplomats and rights activists are seeking to remove Iran from the U.N. agency focused on women’s rights and to form an investigative body under the auspices of the U.N.’s human rights council.

The United States and Albania jointly called for the informal meeting of the Council, and all 15 member countries attended but many not at the ambassador level.

“Our words are powerful. They hold weight. And Iranians must hear from us. We must give them our moral support,” said Linda Thomas-Greenfield, the U.S. ambassador to the United Nations.

The United States announced it would begin an initiative to remove Iran from the U.N.’s Commission on the Status of Women, a 45-member body focused on gender equality and the empowerment of women.

Vice President Kamala Harris, in a tweet posted on Wednesday, said: “Given Iran’s brutal crackdown on women and girls protesting peacefully for their rights, Iran is unfit to serve on this commission. To the protestors: We see you and we hear you.”

Iran is in the midst of a women-led uprising demanding the end of clerical rule with the slogan “Women, Life, Freedom.” The nationwide protests were set off by the death of 22-year-old Mahsa Amini after she was detained by the morality police for violating the country’s mandatory hijab law.

Ms. Amini’s death, which her family says was caused by blows to her head by the police, brought into sharp focus the systematic abuse that Iranian women have endured under the current government. Women’s rights activists have worked for more than four decades, with little tangible improvement, to change discriminatory laws on issues ranging from the mandatory hijab to inheritance, divorce, travel and custody rights.

Shirin Ebadi, an Iranian human rights lawyer and Nobel Peace Prize laureate, spoke to the Council on Wednesday, urging the international community to “stand on the right side of history” by putting pressure on Iran, recalling their ambassadors from Tehran and holding the government there accountable.

“Many young people in Iran were killed for freedom and democracy; don’t let their Islamic Republic impose more grief on people’s lives,” said Ms. Ebadi via live video to the Council. “They will not settle for anything but a democratic and secular government.”

Iran’s U.N. ambassador, Amir Saeid Iravani,  said in a statement to reporters that “the objective of today’s meeting is clearly to interfere in the domestic affairs of a sovereign state,” and accused the United States of spreading disinformation about his country’s handling of the protests.

Videos from Iran have shown security forces violently attacking unarmed protesters with gunfire, beating them with batons and throwing tear gas at them at funerals, on the streets and at universities and high schools. Rights groups say at least 250 people, including 32 children and teenagers, have been killed.

Javaid Rehman, the U.N.’s special rapporteur on the situation of human rights in Iran, told the Council that in the absence of any domestic channels for accountability, the international community must act.

“I would call for the prompt establishment of an independent investigative mechanism to investigate all human rights violations leading up to and since the death of Mahsa Amini,” Mr. Rehman said.

China and Russia, permanent members of the Council and allies of Iran, said that the Council should not meddle in a sovereign country’s internal affairs and that its oversight was limited to matters of international peace and security.

Gabon, a nonpermanent member, said it condemned the violence targeting women and supported independent investigations, but added that human rights should not be politicized.

Ferit Hoxha, Albania’s U.N. ambassador and the co-chair of Wednesday’s meeting, spoke of his personal experience of being raised under a Communist dictatorship. He said he wanted to send Iranians in the streets a message to not be discouraged.

“Few would dare to think that one day we would have a better life, a second chance,” Mr. Hoxha said of his youth in Albania. “The regime crumbled; guess who was on the front line? The youth, the students were there, and as a result, we all had a second life.”