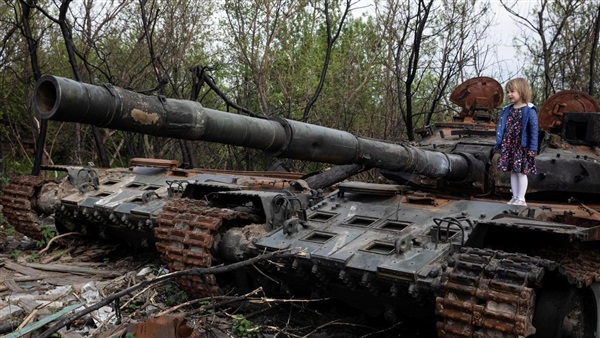 As Vladimir Putin oversaw a Victory Day parade in Russia on Monday, Ukraine staged an alternative one, displaying destroyed and captured Russian equipment in an effort to mock Moscow.

The Ukrainian ministry of defence said in a tweet that the 93rd Mechanized Brigade of its army held a “parade of trophy Russian tanks” to ruin the holiday for the Russians. These tanks were captured from Russian troops amid the war in the eastern European country for the past 75 days.

In an apparent jibe, the ministry added: “Maybe aggressors think that by arming #UAarmy with Russian trophy equipment, it will affect the turn of NATO-style armament? New clever plan.”

On Monday, Moscow and Kyiv marked a subdued Victory Day – a day when both Russians and Ukrainians commemorate the Soviet Union’s victory over Nazi Germany in World War II.

The Victory Day extravaganza in Moscow’s Red Square was overshadowed by a cast of grey clouds where Mr Putin oversaw the yearly parade with the display of some 131 pieces of military equipment – lesser than last year’s 190.

Despite having been touted as a potential venue for Mr Putin to offer an update on Russia’s military operation in Ukraine, his 11-minute speech offered no such detail. Previously, experts thought the celebration, centered around the grand military parade and flypast, could have been used by the president to proclaim victory in Ukraine.

Mr Putin claimed that fighters are fighting for the security of Russia, but neither mentioned Ukraine by name throughout his speech nor formally declared victory.

He justified what he has called a “military operation” on Ukraine to “de-Nazify” it, saying Russia had no choice because the west was “preparing for the invasion of our land, including Crimea”.

“That is absolutely unacceptable to us,” he added.

“The danger was rising by the day,” Mr Putin said. “Russia has given a preemptive response to aggression. It was forced, timely and the only correct decision.”

Ukrainian president Volodymyr Zelensky likened Mr Putin to Adolf Hitler because the Russian leader is “following Nazi philosophy, copying everything they did”.

He predicted that Ukraine will win the war, and said: “Very soon there will be two Victory Days in Ukraine. And someone will not have even one left.”