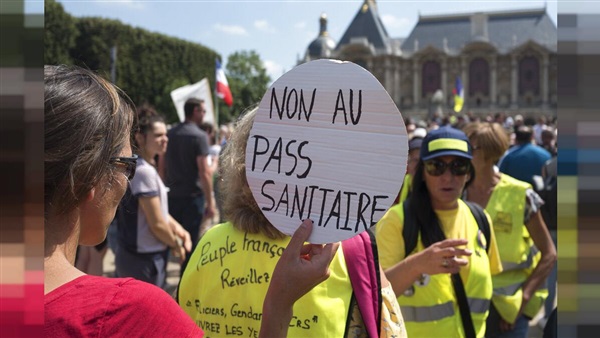 PARIS — Pascale Collino, 64, is far more afraid of the Covid-19 vaccines than of the disease itself. So when the French government decided to implement a new health pass policy barring those without proof of vaccination or a recent negative test from many indoor venues, she took to the streets in protest.

“We have to be on the front lines of this fight,” Ms. Collino said on Saturday near the French health ministry in Paris, where a large crowd had converged, banging pots and cowbells.

For the third week in a row, thousands took to the streets around France to protest the government’s health pass law, which was passed by Parliament recently but still needs a final greenlight from a top constitutional council, expected next week, before it can be fully enforced.

More than 200,000 people marched in Paris, where 3,000 police officers were deployed, and in other cities, including Marseille, Rennes and Strasbourg, according to the French interior ministry. The growing size of the protests from week to week and their motley mix of demonstrators have become an increasing source of concern for the government.

The demonstrators are united in their distrust of the news media and of President Emmanuel Macron’s government, but that is where the similarities end. They include far-right and far-left activists, Yellow Vest members and vaccine conspiracy theorists, as well as vaccinated people who argue that the health pass is oppressive and unfair. They also encompass families angry over new rules dictating that unvaccinated middle and high school students, but not vaccinated ones, will be sent home if a coronavirus infection is detected in their class.

One march that started in northern Paris ended with violence on the Place de la Bastille, where some protesters set trash cans on fire and threw projectiles at riot police officers, who responded with tear gas and water cannons.

Around France, three police officers were injured and 19 people were arrested, the interior minister said.

In southern Paris, Ms. Collino, maskless and carrying a French flag, said she was angry that health workers were forced to get vaccinated by this fall, and that access to bars, restaurants, movie theaters, museums, gyms and other indoor venues would be restricted.

Around her, families waved French flags and protesters shouted “freedom” and “resistance” while carrying makeshift cardboard signs with slogans like “Don’t give in to blackmail” and “No to segregation.”

When the protesters passed a statue of Louis Pasteur, the renowned 19th-century French scientist credited with discovering the principles of vaccination, few seemed to take notice. One elderly man, who was walking past the demonstrators, did. “Pasteur must be turning over in his grave,” he grumbled.

The march there was organized by Florian Philippot, a former member of the far-right National Rally party who has become a figurehead of the anti-health pass movement. Two video journalists for Agence France-Presse left the march after protesters insulted them, spat on them and prevented them from filming, the agency reported.

“We no longer have the freedom to seek the treatment that we want,” said Ms. Collino, a retired I.T. specialist who lives in the nearby town of Sèvres. She did not trust officials to tell the truth about vaccines and said that she had taken it upon herself to seek out information about the pandemic online.

Her attitude, however, has isolated her from some friends and family who favor the health pass policy, as do a majority of French people, according to recent polls. Millions have rushed to get their Covid shots since the pass was announced. But Ms. Collino said she would rather die than get vaccinated.

“I don’t understand why they are in favor while I’m against,” she said.