Democratic candidates zero in on Buttigieg and Sanders at tense debate 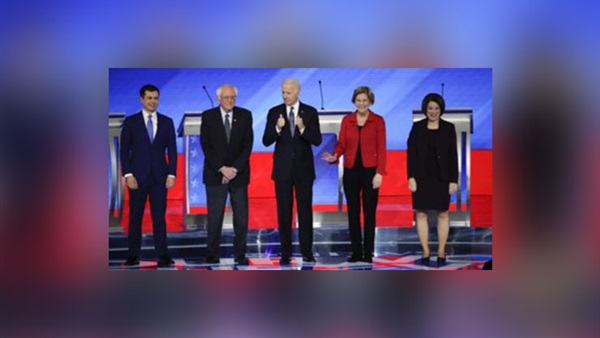 Democratic presidential candidates clashed on Friday night in a tense televised debate that was dominated by attacks against Pete Buttigieg and Bernie Sanders, the two candidates who declared victory after the Iowa caucuses.

In the week that Donald Trump was acquitted in his impeachment trial and days ahead of the New Hampshire primary, the competing visions for the Democratic party were on show as moderate candidates challenged the progressives, and those with more Washington experience called out the relative political newcomers.

Sanders fielded criticism from his fellow candidates over his support for his Medicare for All universal healthcare proposal, a government-run health insurance plan favored by progressives that would revolutionize the US system, while Buttigieg was forced to fend off criticism over his youth and inexperience.

“How much is it going to cost? Who’s going to pay for it?” former vice-president Joe Biden asked Sanders while contrasting his own healthcare plan with the Vermont senators’.

The Friday night debate was a key test for Biden, who has long been regarded as the undeniable frontrunner in the Democratic primary race. But he appeared to have placed fourth in the Iowa contest, far behind Sanders, Buttigieg and Massachusetts Senator Elizabeth Warren.

Opening the debate, Biden acknowledged he “took a hit” in Iowa, and he predicted that he would “probably take a hit” in New Hampshire too, casting himself as an underdog in the Granite state considering Sanders’ strong finish there in 2016.

But Biden warned that Sanders represented a risk because of his self-description as a “Democratic socialist,” and that Buttigieg has not proved he has the experience to be president.

Biden’s longterm prospects appear to increasingly depend on how he performs in the South Carolina primary on 29 February, where he polls very favorably among the state’s large Democratic African American population.

The debate discussion moved to race and South Carolina, as billionaire activist Tom Steyer went on the offensive against Biden by highlighting controversial comments from one of his surrogates in an apparent bid to challenge him for that support.

The spectacle of white men bickering over who has the most support from African-Americans was not lost on some observers. But Biden shot back, saying: “I have more support in South Carolina, the Black Caucus and the black community than anybody else. Double what you have and anybody else.”

Buttigieg, who has struggled to appeal to non-white voters, repeatedly deflected a question about the rate of arrests of African Americans increasing while he was mayor of South Bend, Indiana. Moderator Linsey Davis asked Warren if Buttigieg’s answer was sufficient. “No,” Warren replied, in one of very few standout moments of the night, prompting applause. “We cannot just say that criminal justice is the only time we want to talk about race,” she added.

Ahead of the New Hampshire primary vote, there is still no clear frontrunner in the race to become the Democratic presidential nominee who will take on Donald Trump in November’s election, though recent polling has shown both Sanders and Buttigieg leading.

Seven of the 11 remaining leading candidates took to the stage on Friday night; Sanders, Buttigieg, Warren and Biden, as well as the Minnesota senator Amy Klobuchar, Steyer and the entrepreneur Andrew Yang.

Klobuchar, a moderate who has been trailing the others but enjoyed several strong moments on the debate stage on Friday, presented herself as the person to challenge Trump and work across the aisle, warning that Sanders’ healthcare proposal isn’t supported by “two-thirds of the Democrats in the Senate” and that it would “kick 149 million Americans off their current health insurance in four years”.

When the debate veered toward a discussion on experience, 38-year-old Buttigieg – a former mayor and veteran of the war in Afghanistan – contrasted himself with Biden, Klobuchar and Sanders, saying he represented experience outside of Washington. But Klobuchar, 59, shot back that “we have a newcomer in the White House, look where it got us”.

She also called out Buttigieg for saying he had found watching the impeachment trial “exhausting” (as senators, Klobuchar, Warren, Sanders, and longshot candidate Michael Bennet had all been in Washington to attend instead of campaigning in Iowa).

“That’s not leadership, to just suck up to a room and make a joke so everyone laughs at it about switching [the channel] to watch cartoons. I think that’s degrading of the work that people do,” she told CNN after the debate.

At another point during the debate, Buttigieg took a veiled swipe at Biden and his “politics of the past”.

Biden responded by touting his work in the Obama administration: “I don’t know what about the past of Barack Obama and Joe Biden was so bad.”

Meanwhile, Warren struggled to cut through, speaking far less than in previous debates. Speaking afterwards, she told MSNBC: “I just didn’t say enough, didn’t fight hard enough, didn’t tell you how bad I want this and how good we can make it if we just come together.”

It’s unclear how much impact a messy debate on a Friday will have among New Hampshire voters.

“There are a lot of New Hampshire voters who are still undecided so the debate gives voters an opportunity for a check on some – not all – of the candidates and an opportunity to help make up their mind,” said the former New Hampshire Democratic party chair Kathy Sullivan. But Sullivan also warned that this close to an election, a mistake during the debate “could be a problem”.

Ahead of the debate Sanders strongly signalled that he planned to direct his attacks at Buttigieg. Earlier in the day the Sanders campaign sent out a fundraising email titled “Billionaires Pete Buttigieg.”

After the New Hampshire primary, the next televised debate will be held in Las Vegas on 19 February, a few days ahead of the Nevada caucuses.