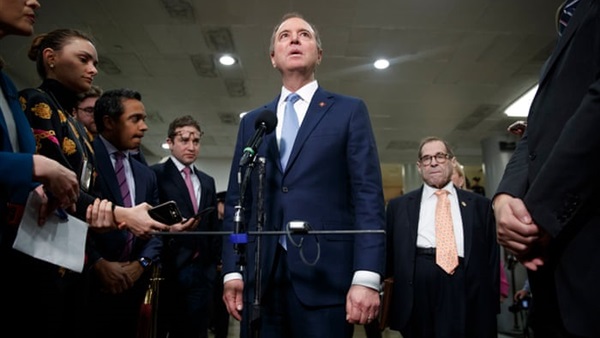 Democrats concluded the presentation of their case against Donald Trump at his impeachment trial on Friday, with the lead prosecutor Adam Schiff calling on Republicans to exercise “moral courage” and vote in favor of calling witnesses at the trial next week.

“Give America a fair trial,” Schiff concluded after three marathon days of argument. “She’s worth it.”

Schiff’s finishing flourish came as Democrats pivoted earlier Friday from the president’s conduct to his attempted cover-up of an alleged scheme to withhold military aid and a White House meeting from Ukraine in pursuit of a political favor.

The White House, Democrats said, tried to hide records of a call Trump had with the Ukrainian president and tried to stop a whistleblower complaint reaching Congress, before Trump demanded federal agencies and employees stonewall the impeachment inquiry.

“He tried to cheat, he got caught and then he worked hard to cover it up,” said the New Yorker Hakeem Jeffries, one of the House “managers” prosecuting the case.

In October, the White House issued a letter ordering federal agencies and employees to defy congressional subpoenas for testimony and documents. A dozen career public servants defied the order but many individuals avoided testifying and no agency turned over documents.

“No other president facing impeachment has taken the extreme step of prohibiting executive branch witnesses from testifying before Congress,” said Zoe Lofgren, the only manager to work on all three recent presidential impeachment cases.

“Even President Richard Nixon – not only did Nixon allow staff to testify before Congress, he publicly asked them to testify, and without a subpoena.”

Republicans told reporters the Democratic case was failing to gain traction on their side of the aisle. But the party’s message shifted perceptibly from recent days, with the South Carolina senator Lindsey Graham, a close Trump ally, urging the Senate to “end this trial with no witnesses for either side.”

The call for no witnesses flew in the face of growing public demand. A Reuters-Ipsos poll published on Friday found 72% of respondents agreed the trial “should allow witnesses with first-hand knowledge of the impeachment charges to testify”. A Washington Post poll found 66% support for witnesses.

In a 90-minute closing statement that seemed to arrest the chamber, Schiff struck a rhythm as he summarized the Democrats’ case – and then launched a preemptive attack on Trump’s defense.

Reading from the articles of impeachment laying out accusations against Trump, Schiff repeatedly toned, “That has been proved.”

“The facts have been proven. Those facts are not contested,” he said.

Schiff then skippingly previewed more than a dozen lines of defense mooted by Trump’s team and the president himself – from “read the transcript” to “[Joe] Biden is corrupt” to “Obama did it” – and deftly eviscerated each one.

Schiff drew laughter from the Senate when he described how Trump’s legal team would brandish in the president’s defense his statement that he wanted “nothing” from Ukraine – “no quid pro quo.” That line of argument, Schiff japed, would be based on “the well known principle of criminal defense” that when someone denies a crime they didn’t do it.

The trial was scheduled to reconvene with an opening presentation by Trump’s legal team on Saturday at 10am.

Trump’s team will make a “straightforward” defense, a source working on the team said, on condition of anonymity: “The president didn’t do anything wrong.”

Trump’s lawyers have indicated that they may take fewer than the 24 hours allotted under the rules. Following their presentation, 16 hours have been set aside for questioning by senators, after which the body will debate and vote on whether to call additional witnesses.

Emerging for a dinner break, the minority leader, Chuck Schumer, said: “The president’s lawyers will have their work cut out for them.

“The House managers did an amazing job and set a very, very high bar, which will be difficult for the president’s lawyers to overcome.”

Asked to address an ABC News report that an audio recording from 2018 had surfaced in which Trump can be heard to order the dismissal of the then ambassador Marie Yovanovitch – “take her out”, the president appears to say – Schumer said the president was “vicious”.

“He is vicious to her,” Schumer said of Trump. “Regardless of everything having to do with impeachment, no president should be like that.”

In the Senate chamber, House manager Jerry Nadler warned that Trump’s “unprecedented and dangerous power grab … will constitute a playbook for ignoring oversight” for future presidents.

“Imagine what future presidents will do when we attempt to conduct routine oversight,” Nadler said. “Historians will mark the day that this Senate will allow this president to break one of strongest barriers against tyranny.”

In one surprise, lead impeachment manager Adam Schiff used archival footage of the late senator John McCain, a strong supporter of Ukrainian autonomy from Russia, arguing on cable TV that US support was essential to confronting Russian aggression.

As he has for days, Schiff strived to appeal to Republican senators in a way that would circumvent the cold political calculus of the moment. A two-thirds majority of voting senators would be required to remove Trump from office. Republicans hold a 53-47 majority.

Schiff has warned that Trump threatens the constitution and America’s standing in the world. But on Friday he asked the senators to consider something else Trump could threaten: themselves.

“I don’t care how close you are to this president,” Schiff said. “Do you think for a moment that he wouldn’t investigate you if it was in his political interests?”

Graham replied with another call to investigate the Joe Biden and his son, Hunter Biden, who once worked for the Ukrainian gas company Burisma.

“I want to echo what Mr Schiff said today,” Graham said. “I want every American to put themselves in the shoes of the Bidens. Your son winds up getting $3m from the most corrupt entity in the Ukraine, Burisma. Would you expect the American people to give you a pass?”