4 dead after a shooting at a Florida naval base 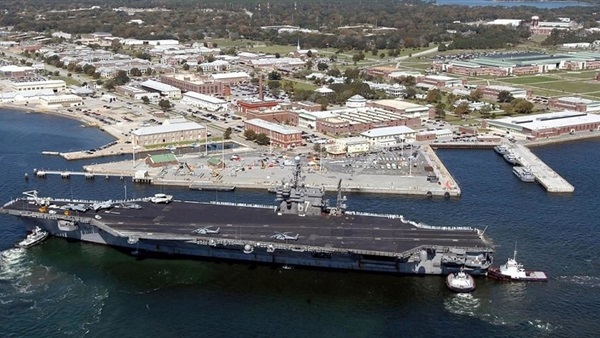 A shooting in a classroom building at a Florida naval base on Friday morning left four people dead, including the gunman, and seven others injured.

The harrowing shootout at the home of the Navy’s fabled Blue Angels aerial demonstration team was the second instance of deadly gunfire at a U.S. naval base in three days. On Wednesday, a sailor opened fire at Joint Base Pearl Harbor-Hickam in Hawaii, killing two and injuring a third, before killing himself.

The Florida shooting began just as the sun was rising in the Panhandle, and by the afternoon, the FBI had taken command as the lead investigative agency, seeking to determine whether the gunman’s history or any social media posts pointed to terrorism or some other motive, officials said.

The shooting is being reviewed for any links to terrorism, though the FBI has not yet determined whether to classify the case as one of terrorism, said a U.S. official, who spoke on condition of anonymity to discuss an ongoing investigation. An initial survey found no apparent connection to a foreign terrorist group, though the official cautioned that the investigation is still in its early stages. There are no indications of a conspiracy at the moment, the official said, adding that the shooter may have been self-radicalized.

U.S. and Saudi government officials identified the gunman as Ahmed Mohammed al-Shamrani, who had been receiving aviation training at the base. Officials said investigators are also working to determine what, if anything, Shamrani’s fellow students knew about his intentions.

The deadly violence at the hands of a Saudi military student on an American base threatens to further complicate relations between the two countries, but President Trump struck a measured tone on Twitter, saying that Saudi King Salman had called him “to express his sincere condolences and give his sympathies.”

“The King said that the Saudi people are greatly angered by the barbaric actions of the shooter, and that this person in no way shape or form represents the feelings of the Saudi people who love the American people,” Trump tweeted.

Saudi Arabia’s Ministry of Foreign Affairs issued a statement declaring its “deep distress” over the incident and pledging to “provide full support to the U.S. authorities to investigate the circumstances of this crime.”

Trump’s restraint stood in contrast to some of his past reactions to violence by people from predominantly Muslim countries.

Hours after eight people were killed in a 2017 alleged terrorist attack in New York City, Trump demanded officials “step up our already extreme vetting program. Being politically correct is fine, but not for this!” As a presidential candidate, the president once declared that “Islam hates us.”

Late Friday, several independent organizations published postings from a Twitter account said to belong to Shamrani. The postings, under the handle @M7MD_SHAMRANI, included a photo image of a letter in English apparently written a few hours before the shooting rampage. The Washington Post has not confirmed that the account belonged to the shooter.

In the letter, the writer blasts the United States for “funding crimes against Muslims” and supporting Israel. “You will not be safe until we live it as reality in [Palestine], and American troops get out of our land,” he writes.

The letter does not contain an explicit pledge of support for any group, but the contents echo views expressed by al-Qaeda as well as extremist clerics in the Persian Gulf, analysts said. The account profile lists the U.S. Chief of Naval Operations as among the accounts followed.

“The style doesn’t necessarily resemble one group over another,” Katz said. “However, given that ISIS has very little to lose at this point, it wouldn’t be surprising if it claimed the attack, regardless of the attacker’s potential allegiances.”

After Friday’s shooting in Florida, state officials called for closer scrutiny of the training program that brought the gunman to the United States and said the Saudi government should pay compensation to his victims.

“This is a dark day for a very great place,” said Florida Gov. Ron DeSantis (R). “I think there’s obviously going to be a lot of questions about this individual being a foreign national, being a part of the Saudi air force and then to be here training on our soil, to do this.”

Saudi Arabia “needs to make things better for these victims, and I think they’re going to owe a debt here,” DeSantis added.

Sen. Rick Scott (R-Fla.) said he was “extremely concerned” by the issues raised by the shooting and called for a review of all programs that place foreign nationals with U.S. military personnel.

“Whether this individual was motivated by radical Islam or was simply mentally unstable, this was an act of terrorism,” Scott said. “It’s clear that we need to take steps to ensure that any and all foreign nationals are scrutinized and vetted extensively before being embedded with our American men and women in uniform.”