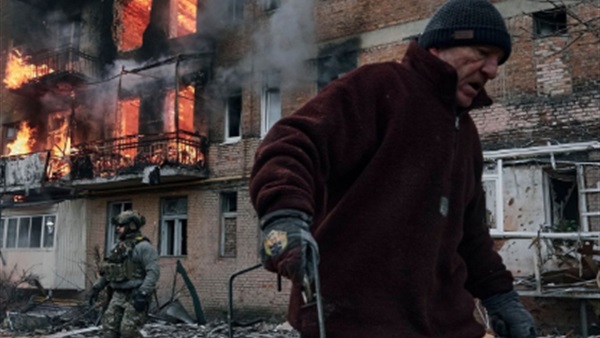 Russia took steps to strengthen its defenses following a string of strikes deep within its borders that it blamed on Kyiv, while Moscow’s forces launched drones and missiles at southern Ukraine.

Several villages in Ukraine’s Zaporizhzhia region were hit by drones and S-300 surface-to-air missiles overnight, Gov. Oleksandr Starukh said Wednesday. More than 20 homes were struck and three people were wounded, including a 15-year-old girl, he said. Six additional drones were shot down.

Nikopol, in the neighboring Dnipropetrovsk region, was hit by heavy artillery that destroyed a dozen homes as well as damaged gas pipelines and a school, said Gov. Valentyn Reznichenko. He added that Russia launched several drones in the region, all of which were shot down.

“The Russian occupiers continue the nightly terror of our peaceful lands,” said Mr. Starukh, the Zaporizhzhia governor. “There could have been many more casualties.”

The Russian strikes come after a series of drone strikes deep inside Russia earlier in the week. On Tuesday, drones struck an airfield in the Russian city of Kursk, igniting a fuel-storage facility. A day earlier, strategic-bomber bases in the cities of Engels and Diagilevo—both hundreds of miles from Ukrainian-controlled territory—were hit.

Ukraine hasn’t claimed responsibility for the strikes. Though Ukrainian forces aren’t believed to possess the kinds of long-range cruise missiles that Moscow has used to attack infrastructure across Ukraine over the past two months, officials have hinted that they have the capability to hit bases deep inside Russia.

U.S. House and Senate negotiators have agreed to a provision in the annual defense-policy bill that would designate $800 million more for security assistance to the Ukrainian armed forces. The bill must now pass the House and then the Senate before heading to President Biden’s desk for his signature. Kremlin spokesman Dmitry Peskov, in a call with reporters Wednesday, called the bill confrontational.

Russia, meanwhile, has been bolstering its defenses across its land border with Ukraine, according to the British Ministry of Defense.

The governor of Russia’s Belgorod region, which borders northeastern Ukraine, on Tuesday announced the creation of territorial defense units.

“We are forming several battalions of those who, due to health reasons or within the limits of age, cannot be called up by the armed forces, but have combat experience and a great desire, if necessary, to defend their home and family,” Vyacheslav Gladkov wrote on Telegram.

Russian President Vladimir Putin also gathered his national-security council on Tuesday for a meeting on how to guarantee “internal security,” according to state media. On Wednesday, Mr. Putin said there would be no mobilization efforts in the foreseeable future. Of the 300,000 men who were called up in the fall, half are now in Ukraine, he said, with 77,000 of them serving in combat units.

“There is a realistic possibility that the Russian authorities are promoting defensive preparations within internationally recognized Russian territory to burnish patriotic feeling,” the British Ministry of Defense wrote Tuesday on Twitter. “It probably illustrates some Russia decision makers’ genuine (but false) belief that there is a credible threat of invasion by Ukrainian forces.”

Meanwhile, the most intense fighting has been taking place in eastern Ukraine, where Russian forces have been pushing to take the city of Bakhmut, a key strategic hub, for months. Ukrainian President Volodymyr Zelensky visited troops in the region on Tuesday, which the country celebrated as the Day of the Armed Forces of Ukraine.

“For eight years and 286 days, the Armed Forces of Ukraine have been defending our beautiful state from the occupier, from Russian aggression,” Mr. Zelensky said in his nightly video address, referring to the start of the conflict in 2014, when Russia-backed separatists began fighting for control of the eastern Luhansk and Donetsk regions, collectively known as Donbas. “Thousands of Ukrainians gave their lives for the day to come when not a single occupier remains on our land and all our people are free again,” he said.

In his Wednesday night address, Mr. Zelensky said that Russian forces carried out an attack on Kurakhove—a town in the eastern Donetsk region—that he said was aimed at civilians “at the market, elevator, gas station, bus station, residential building.” He added that at least 10 people were killed and many wounded. Moscow has in the past denied that its forces deliberately target civilians.

Igor Girkin, a former Russian militant commander and an influential voice among Russian hard-liners, also visited troops in Donbas recently, he wrote Tuesday on Telegram. He said that what he found there was a poorly motivated Russian army, especially compared with Ukrainian forces.

“The troops are fighting ‘by inertia,’ not having the slightest idea of the ultimate strategic goals of the current military campaign,” he wrote, adding that fighters from Luhansk and Donetsk were better motivated.

Efforts to break Ukrainian will, he added, weren’t working.

“‘Ukraine’ will NOT freeze in winter, will NOT rebel and will NOT fight worse. Vice versa. Its soldiers, who have already believed in their strength as a result of the autumn victories…will only fight angrier and more stubbornly,” he wrote. “And they will be met only by apathetic performance of duty, behind which many fighters and commanders have long been [asking] the unresolved question: ‘What are we doing here?’”