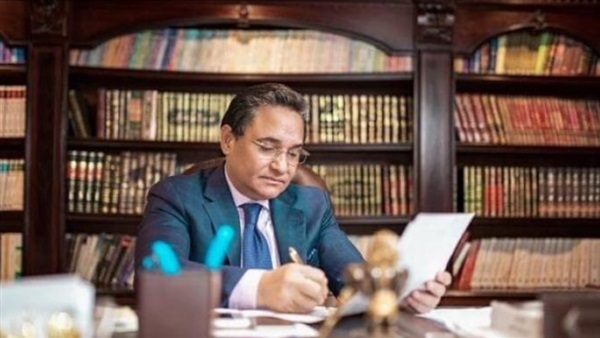 This started with the Brotherhood, and its extremist offshoots, and then al-Qaeda, and ISIS with all their branches and loyalists in Africa and the Middle East.

Al-Bawaba took upon itself the task of uncovering the behind-the-scenes and secrets of these groups.

Thanks to all this, the site was described as being ahead of all its competitors in informing the regional and international community about the crimes and schemes of evil forces that want to overthrow some regimes to establish their so-called state, on one hand, and spread their extremist ideas and recruit as many groups as possible to carry out operations against the security and stability of countries, on the other.

Ali has always warned against this scheme. He has made and continues to make tours to European countries to inform everybody about the secrets of these groups.

The most important of these endeavours was a lecture Ali delivered at the European Parliament in June 2018.

In this lecture, he proved with evidence and proofs the danger of the terrorist Brotherhood on the European continent.

This caused French journalist, Alexandre del Valle, to describe Ali as an 'encyclopaedia' and a 'goldmine' that contains many secrets about the terrorist group and its plans to target European countries.

Valle also conducted a series of interviews with Ali for Atlantico website, one of the most famous in France.

He asked Ali later to provide the French site with his visions in the field of terrorist organizations over the following years.

Ali has become a voice of righteousness in the European sphere. This voice resonates and besieges the Brotherhood in several European countries.

"I have lived among those organizations, examined their ideas thoroughly and confronted them, their leaders, cadres and supporters on several issues," Ali said. "Through a third of a century of careful follow-up of these groups, it has been confirmed to me that knowledge is a bridge that can lead us to a correct understanding of the ideas and plans of these groups, both in our Arab and Islamic countries and in Europe and America," he added during a meeting with some members of the French parliament in mid-May 2019, commenting on the reason for launching the Centre for Middle East Studies (CEMO) in Paris in 2017 to specialize in the issues of operative Islam and terrorism.

In October 2018, the centre launched The Reference, a specialized website in Arabic; English; French, and German.

The opening of CEMO was preceded by the establishment of the Arab Centre for Research and Studies in 1998. The centre is an independent entity concerned with the studies of political Islam around the world.

There is also the Islamic Movements Portal which is part of the Arab Centre's system. The portal works on the study and analysis of political Islam movements. This adds to The Reference site for the studies of operative Islam. The site's content is written in four languages, namely Arabic; English; French, and German.

All these institutions work together with al-Bawaba which has been launching international campaigns aiming at banning the Brotherhood globally, considering it an organization that calls for violence and terrorism.

Al-Bawaba News has been publishing Ali's episodes about the secret files of the Brotherhood since August 2018, in his keenness to uncover the historical plans of the Brotherhood. The episodes clarify the movement's relations with the Egyptian government over the ages.

To date, ten episodes have been published. They cover the assassination by the Brotherhood in 1948 of former Egyptian prime minister al-Noqrashi Pasha. The 11th episode, the last to be published so far, was titled 'Muslim Brotherhood and Terrorism: Having a Taste of One's Evil Deeds'.

In this episode, Ali revealed what he described as a 'strange' incident.

He tells of Sayyed Fayez who was in charge of the Brotherhood's special apparatus under Hassan al-Banna, the founder of the Brotherhood in 1928. Fayez was killed by Abdel Rahman al-Sindi who was removed by al-Banna from the leadership of the apparatus to put Fayez in his stead.

On the occasion of the eighth anniversary of the founding of al-Bawaba, we will address the most prominent issues and secrets revealed by Ali, who is the chairman of the boards of directors and editors of the newspaper and the director of CEMO.

We will also throw light on reports about group's that the foundation highlighted through its various specialized platforms, starting with the newspaper and its multiple websites, about the Brotherhood's schemes and crimes inside and outside Egypt.

We will especially focus on the activities of the group during the last three years: from 2020 to 2022.

Conflict inside the mother organization

Al-Bawaba allocated a special space to the divisions and conflicts facing the Brotherhood, especially since the death acting general guide Ibrahim Muneer on November 4, 2022.

Immediately, the newspaper published on its site and in print the names of the four candidates to succeed Muneer, according to the internal regulations of the group.

Al-Bawaba reported that the choice of the acting guide revealed the aggravating the crisis inside the International Organization of the Muslim Brotherhood.

It indicated in one of its reports in early December 2022 that the Istanbul Front did not wait for the one-month deadline to come to an end and hastened to announce Mahmud Hussein, the leader of the front, as acting general guide.

It is worth noting that Ali recounted nine decades of divisions inside the Brotherhood, which became clear to the public in 2021.

The group was divided into three teams, namely, the London Front, the Istanbul Front, and the Change Movement or Kamalists who followed Mohamed Kamal, the head of the group's Operations Office who was killed in October 2016 by Egyptian security forces.

Ali pointed out that this would make the group lose its influence and ability to mobilize the street in its favour. This, he added, had already happened when the group made calls for protests on November 11, 2022. The calls fell flat with most of the members of the public in Egypt neglecting them.

Ali said in mid-December 2021 that after decades of violent action and terrorism, the Brotherhood began to collapse, fade and crack from inside after peoples renounced it and revealed its ugly face.

Renowned writer Dalia Abdelrahim, editor-in-chief of al-Bawaba News, revealed on November 28, 2022, that the financial corruption of the Brotherhood caused rifts inside the organization recently.

She indicated that Mahmud Hussein, a Brotherhood leader based in Istanbul, was accused of embezzling the funds of the group's branch in Turkey, known as the Istanbul Front.

Although the amount of these funds is not known, CEMO obtained information that the embezzled money amounted to $1.5 million.

The newspaper reported that France is currently investigating the financial corruption of the Brotherhood through some offshore companies, which are exempt from taxes.

It added that French authorities monitored the transfer of large amounts of money to 21 leaders of the terrorist group.

It should be noted that the director of CEMO revealed during the past years the financial corruption of the terrorist group, warning in a statement in early January 2022 against offering safe havens that enable the group to spread its plans in the countries of the region.

He said the members of the group, who are based in Turkey, transfer huge funds to other countries, including Syria, Lebanon, Afghanistan, Latin America and Europe, after they were informed of the need to leave Turkey.

This came after Turkey took steps to improved its relations with Egypt and abandon its support of the Muslim Brotherhood leaders who fled abroad for fear of being deported to Egypt.

Ali warned the international community, the Security Council and the Arab League against these suspicious funds.

These funds, he said, would be used in carrying out terrorist acts and subversive activities.

He called on these institutions to besiege the group to save innocent lives before it is too late.

Ali noted that elements of the Brotherhood organization were heading to Lebanon in late October 2021, and some of them tried to travel to Europe.

They, he said, transferred large amounts of money in foreigners' names to London, America, Latin America, Malaysia and other countries.

He added that these money transfers caused an aggravation of disagreements between the leaders of the group, as they accused each other of embezzling large funds during the smuggling of these funds to London and America and the disappearance of part of them.

During the past years, Ali took upon himself the responsibility to defend the Egyptian state against the evil forces that target it, despite receiving threats from terrorist organizations several times.

However, he did not retreat, moving ahead with exposing the methods of these groups, not only at home, but also toured most European capitals, especially in Geneva; Munich; Paris, and others.

He delivered lectures, held seminars, and provided documents and evidence that divulged attempts by the Brotherhood to penetrate Europe after it was besieged in Egypt.

With its specialized platforms already mentioned, al-Bawaba focused on highlighting the steps taken by some European countries over the past eight years to tighten the noose around the Brotherhood.

This happened thanks to warnings by Ali to European decision-makers against the group's plans. The Supreme Council of the Muslims of Germany issued on September 18, 2022, a decision to expel all Brotherhood fronts from the membership of the council, foremost of which is the Islamic Centre in Munich and the Muslim Brotherhood's Student Union.

The council also stripped Ibrahim al-Zayat, known as the minister of finance of the Brotherhood, of all his posts within it.

In January 2020, al-Bawaba and its various platforms, in multiple languages and through reports, situation assessments and profiles, allocated space to reveal the Brotherhood's plans and moves in regional states.

It uncovered the details of the group's plan to seize power in Libya. This came under the title 'Erdogan's plan to devour Libya with the blessing of Serraj comes into force'.

It noted that Turkey-backed mercenaries were used by Ankara to save the National Accord Government in Libya.