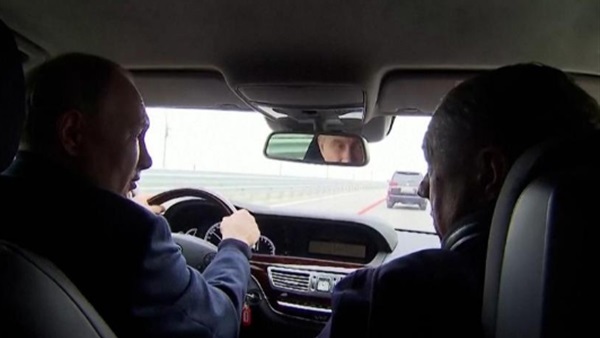 Ukrainian cities faced a new barrage of missile attacks yesterday as Moscow accused Nato of being involved in a direct military confrontation with Russia that could spark a nuclear war.

Air raid sirens wailed across Ukraine as Russia launched about 70 missiles, including Kalibr cruise missiles fired from warships in the Black and the Caspian seas. Russian strategic bombers were also involved in the attacks, the Ukrainian air force said.

At least four people were killed, President Zelensky said, adding that most of the Russian missiles were shot down.

“In many regions, there will have to be emergency blackouts,” he said in a late-night video address. “We will be doing everything to restore stability.”

In the Zaporizhzhya region, at least two people were killed and several houses destroyed, the deputy head of the presidential office, Kyrylo Tymoshenko, said. Two bodies were recorded covered with blankets next to a damaged car in the village of Novosofiivka, some 25km east of the city of Zaporizhzhya. “Both of my neighbours were killed,” Olha Troshyna 62, said. “They were standing by the car. They were seeing off their son and daughter-in-law.”

There were also blasts near Kyiv, as well as in Odesa, the Black Sea port city, and in Kryvyi Rih, in southern Ukraine.

There were power cuts in Sumy, in northern Ukraine, after missiles hit energy facilities. In Kyiv people rushed to take cover in metro stations but there were no immediate reports of direct strikes on the capital. Ukraine said its air defence systems had shot down 60 of the missiles.

As the missiles hurtled towards Ukraine, President Putin drove a vehicle across a section of a 12-mile long bridge that links Russia to Crimea, the Black Sea peninsula that was annexed by Moscow in 2014.

The Kerch bridge, which was constructed by Russia after the annexation, was badly damaged in October in a huge blast that killed four people. The Kremlin accused Ukraine of being behind what it called a “terrorist attack”. While officials in Kyiv welcomed the blast, they did not claim responsibility. Putin’s visit to the bridge, which was aired by state television,aimed to prove that Russia’s vital land link to Crimea is once more fully operational.

His trip came after Sergei Lavrov, the Russian foreign minister, said Nato’s support for Kyiv meant it was now directly involved in the conflict. “This is fraught with [the danger of] a direct clash of nuclear powers with catastrophic consequences,” Lavrov said. He also accused western countries of refusing to “take seriously” Moscow’s warnings of nuclear conflict.

Putin vowed in September that Moscow would use nuclear weapons to defend four regions of Ukraine that Russia claims as its own territory. He later appeared to backtrack on the threat, saying that there was no reason for the Kremlin to deploy its nuclear forces in Ukraine.

Yesterday’s attacks were the latest in a series of Russian missile strikes on Ukraine’s energy infrastructure that began in October and which are aimed at breaking the country’s morale.

Fragments of one of the Russian rockets were also believed to have fallen in an orchard in neighbouring Moldova. “A new wave of missile attacks is taking place in Ukraine, which has direct consequences for our country,” said Natalia Gavrilita, Moldova’s prime minister. The former Soviet state, which is not a member of Nato, shares a power grid with Ukraine.

Sergey Lavrov, the Russian foreign minister, said Nato’s support for Kyiv meant that the western military alliance was now directly involved in the conflict. “This is fraught with [the danger of] a direct clash of nuclear powers with catastrophic consequences,” Lavrov said. He also accused western countries of refusing to “take seriously” Moscow’s warnings of nuclear war.

President Putin vowed in September that Moscow would use nuclear weapons to defend four regions of Ukraine that Russia claims as its own territory. He later appeared to backtrack on the threat, saying there was no reason to deploy nuclear forces in Ukraine.

Lavrov was speaking hours after Kyiv appeared to have carried out its deepest strikes into Russian territory with attacks on military airbases hundreds of miles from the front that killed three people and damaged two long-range bombers.

The nuclear-capable Tu-95 bombers, known as Bears by Nato, were damaged when a suspected drone fell on to a runway at the Engels-2 airfield near Saratov, about 450 miles from Ukraine, independent Russian media said.

A huge explosion that illuminated the sky could be seen at the airfield at about 6am local time, according to a video posted by Anton Gerashchenko, an adviser to the Ukrainian interior minister. A blast killed three people and injured five at the Dyagilevo military airfield near the city of Ryazan, about 120 miles south of Moscow. A military aircraft was also damaged. Both airbases were used for attacks on Ukrainian energy facilities.

“Some sources report that this morning planes based on Engels and Ryazan airfields were scheduled to bomb Ukrainian energy infrastructure yet again,” Gerashchenko wrote on Telegram. Kyiv has not confirmed that it was responsible for the blasts.

The attacks would be among Ukraine’s most ambitious yet. Ukraine said in October that it was developing a drone with an estimated range of 1,000km (620 miles), a potential game-changer in the nine-month war. The so-called kamikaze drone is believed to carry a 75kg bomb.

The blasts will raise Russian concerns that they are increasingly vulnerable to Ukrainian strikes. Ukrainian special forces are thought to have carried out a number of cross-border attacks on oil refineries, ammunition depots and communications networks.

While Ukrainians struggle to keep warm, the war is also leaving some Russians in the cold after council workers who maintain central heating systems were sent to the front.