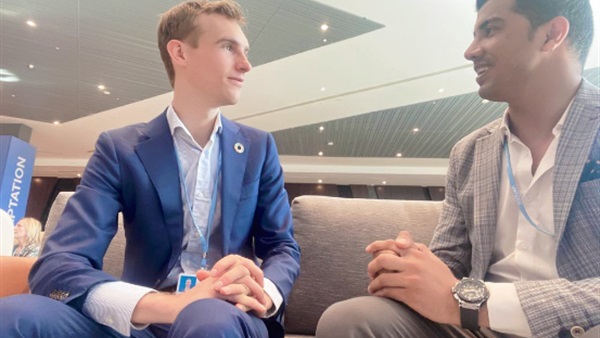 Africa produces only 6% of global emissions, but it is bearing the brunt of the suffering caused by climate change.

COP27 is held in Sharm el-Sheikh, known as the city of peace, at a time when the world faces many challenges induced by climate change.

This change threatens the entire global community. The climate summit in Sharm brings together guests from several countries and representatives of many climate-related institutions.

The past eight years witnessed climate disruption, leading to a significant increase in the scale of natural disasters. Current climate policies will condemn the world to a catastrophic rise in temperatures by 2.8 degrees by the end of the century. Collective action must be taken to reduce this rise to 1.5 degrees. However, greenhouse gas emissions are still rising.

Among those attending the summit is Marie Francoise, the World Bank (WB) country director for South Africa, Botswana, Namibia, Lesotho and Eswatini.

Al-Bawaba News interviewed both guests on the margins of the summit.

"I was surprised by the great awareness that I see across the continent," she said.

Duursen called for global solidarity so that developing countries can make the transition to the green economy.

There must be, he said, climate finance to help them do so.

Here is the interview al-Bawaba News conducted with both summit guests:

What is the importance of this year's climate change summit?

There are two distinctive factors at this summit, firstly: ongoing discussions on loss and damage, which developing countries have been trying to put on the agenda of dialogues several times in the light of the resistance of rich countries. It remains to be seen what the outcome of the delegations' discussions on this matter will be. The second thing that is special at this summit is the discussions of the delegations on the new adaptation programmes and the ambitions related to them. This is something that is very important, especially in the coming decades.

How do you see the Egyptian organization of the summit?

Regarding the organization of this event, I think it is a big challenge for all countries to cope with the organization of a conference attended by all these people. The number of participants is so large. Despite being an observer, I was unable to attend one of the sessions today due to the limited space and the large number of attendees.

What are the proposed solutions to solve the problem of climate change?

I think the solutions offered to deal with climate change are being discussed at the roundtables now. We should all unite on the goal of keeping global warming low, specifically curbing the temperature increase of 1.5 degrees.

Going green and implementing sustainable development needs some mechanisms to succeed and continue. In your view, what factors do we need in this file?

With regard to the transition to clean green energy and sustainable development, one of the most important things we need is global solidarity. In order for developing countries to be able to make this transition, there must be climate finance.

It is known that this summit is called the implementation summit. Will we see resolutions obliging major industrialized countries to support climate change financing?

The implementation summit needs something important, which, as we said, is financing. I hope we can achieve this at this summit. As for how this will happen, I believe that developed countries should take the initiative and shoulder their responsibility through political decisions at the highest levels to formulate appropriate ways and means of financing.

Do you think that the meeting of heads of state during COP27 will bear fruit?

What is your last message to all participants of this event?

My final message to those attending the summit is to closely monitor what is happening and increase pressure on their governments to take action to confront climate change. Climate change directly affects developing countries, food and energy. Countries must support each other to combat climate change, address it and mitigate its severity. Many countries suffer from natural environmental disasters, especially fires, floods and droughts. We must join hands and work to reduce losses and damage.