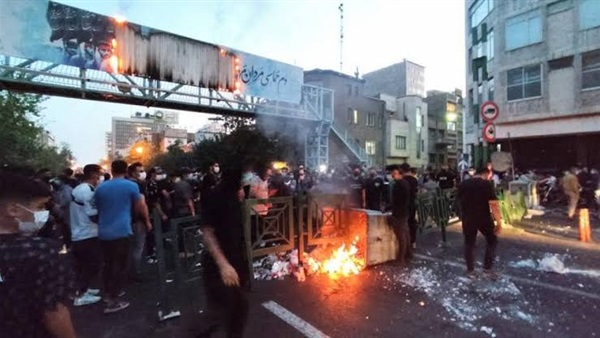 Iran has deployed female special forces to its streets for the first time in a desperate bid to quell mass protests that erupted over a young woman dying after a beating at the hands of morality police.

The elite commando unit was dispatched to patrol streets with photographers to catch protest ringleaders, as human rights groups said the death toll from the unrest had risen to 31.

The death of Mahsa Amini, who was allegedly beaten by morality police for improper dress before she fell into a coma, has led to unprecedented demonstrations across the country. Failing to wear a headscarf has been illegal in Iran since the 1979 Islamic Revolution.

Colonel Heydari, the female commando unit's leader, confirmed in a video released on Thursday that female troops were being deployed at public protests for the first time.

When asked by reporters if the presence of female commandos would only fuel the unrest, he responded: "The arrival of our women's police force is to bring peace. I'm sorry to see other women in these protests carrying out illegal actions that are inconsistent with social rules."

He was then confronted over Iranian forces attacking female demonstrators, and insisted: "There is a way to protest. There is a law and the Iranian state has clear rules on what is allowed. The temporary protest that we see here is an illegal act."

It came as Iran significantly reduced access to the internet as more video footage emerged which showed running street battles between protesters and security forces on the streets of Tehran and other major cities. In one video clip protesters turned over security vehicles, while in another they overpowered an officer armed with a taser.

In the restive province of Kurdistan alone, ten demonstrators were killed in clashes with riot police, with a 15-year-old boy among them, according to the Human Rights Organisation of Kurdistan.

Iran also arrested prominent women's rights activists in the holy city of Mashad, where demonstrators took over a police station and set it on fire.

Writer and feminist Manoureh Mousvi's home was raided by security forces, and she was taken to prison, as Fatemeh Sepehri, who has called for Supreme Leader Ali Khamenei to resign, has been arrested on charges of "spreading propaganda by the order of foreign powers".

Iran’s former queen, Farah Pahlavi, joined hundreds of the country’s artists and public figures, including JK Rowling, to show their support for the protestors.

"I am proud of our country’s women who despite all repressive and brutal measures of the last four decades against them are on the streets to win their basic human rights and freedoms," she said in a statement from her residence in Paris.

Also on Thursday, senior CNN reporter Christiane Amanpour revealed that she had cancelled an interview with Irainian president Ebrahim Raisi after aides insisted that she wore a headscarf, even though the interview was taking place in New York on the sidelines of the UN General Assembly.

Mr Raisi has dismissed criticism of the Islamic Republic's treatment of women, claiming that they have "voluntarily chosen to wear the hijab".

"Iranian people are today united in their opposition to the current regime’s many domestic and foreign policies that have resulted in repression at home and economic woes due to neglecting the national interests’", she told The Telegraph.

"The Iranian women are now naturally at the forefront of this national movement because they have been the main victims of the regime’s discriminatory policies and backward laws since its inception more than four decades ago."