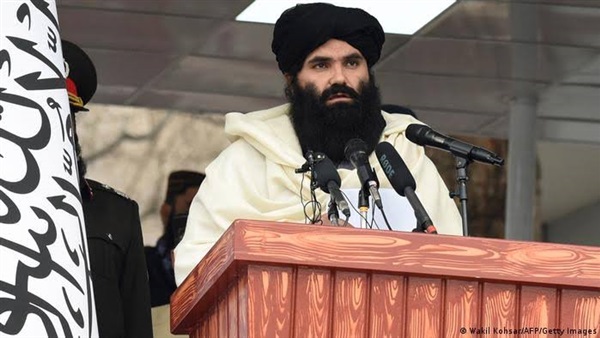 Sirajuddin Haqqani is one of the most controversial names in the Afghan Taliban government for both internal and external considerations. The man is associated with the Haqqani network, the most extremist wing of the Taliban movement. His name was also mentioned in major violence operations, most notably the attempted assassination of former Afghan President Hamid Karzai in 2008, in addition to his inclusion on the US terrorist list.

Haqqani’s recent appearance for the first time since the Taliban seized power last August and the assignment of the Ministry of Interior portfolio to him in the caretaker government sparked a new case of controversy around him.

Haqqani appeared for the first time in public on Saturday, March 5, with an open face during an official ceremony in Kabul. He had no pictures published, whether on the media outlets of the Taliban movement or others, except for one picture published by the authorities on a “Wanted by the FBI” poster.

The photo came during his speech, which Haqqani delivered during a celebration held by the movement on the occasion of the graduation of students at the Police Academy, in which he said, “In order to satisfy you and establish your confidence... I appeared in the media during a public meeting with you.”

The sites loyal to the Taliban movement widely circulated Haqqani's image as a unique type of sacred appearance and manifestation for a character surrounded by mystery, celebrating it as a unique event and reflecting the importance of secrecy about his personality, whereabouts and movements throughout the past period.

Sirajuddin Haqqani is the son of Sheikh Jalaluddin Haqqani, a member of the Shura Council of the Islamic Emirate of the Taliban, the de facto leader of the Haqqani Network (one of the striking arms of the Taliban movement), and one of the most prominent allies of al-Qaeda. He was born in Paktia Province and was assigned by the Islamic Emirate to the southeastern front of Afghanistan in Paktia , Khost, Paktika. He then assumed the position of interior minister in the Taliban government after it seized power in August 2021 and is one of three deputies of Taliban leader Hibatullah Akhundzada.

The Haqqani Network is known for its closeness to al-Qaeda and for carrying out several suicide operations. A number of the most violent attacks in Afghanistan in recent years have been attributed to it.

The network was also accused of assassinating prominent Afghan officials and holding Westerners hostage before releasing them for ransom or prisoners, such as US soldier Bowe Bergdahl, who was released in 2014 in exchange for five Afghan detainees from Guantanamo Bay.

The Haqqani fighters, known for their independence, fighting skills, and lucrative trade, are apparently responsible for Taliban operations in the mountainous regions of eastern Afghanistan and are believed to have a strong influence on the movement's decisions.

Sirajuddin Haqqani is wanted for questioning in connection with an attack in the Afghan capital, Kabul, that dates back to 2008. It is believed that Haqqani was involved in attacks attempting to assassinate former Afghan President Hamid Karzai, in addition to the killing of a number of American soldiers.

The Taliban movement claimed responsibility for the operation, and Taliban spokesman Zabihullah Mujahid stated that the operation resulted in the killing of three members of the movement, while three managed to escape. Small arms and rocket-propelled grenades were used in the attack.