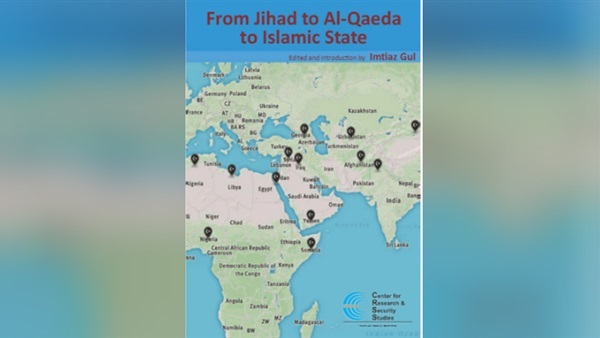 Under the title of "Jihad from Al-Qaeda to Daesh: The Evolution of Terrorist Groups," the Center for Research and Security Studies (CRSS) presented a joint publication of the Center's most prominent research on terrorism studies and Islamic groups.

While there are numerous studies on extremist and terrorist groups, this publication is geographically and scientifically related to Pakistan, where the public is accustomed to hearing its name coupled with extremism, terrorist operations and bloody battles.

From the very first moment, and not after long surfing, the book of 2015 seems to have been designed specifically to improve that image of Pakistan, and to portray it as a victim rather than as successive governments sponsoring terrorism, as the United States looms from time to time.

The book, "From Jihad to Al-Qaeda to Islamic State," also identifies some of the reasons that have contributed to giving Pakistan that stark position on the map of international terrorism.

One of the most prominent reasons is the historical events in which Pakistan grew up and made it a sectarian ethnic state when the Indian peninsula was divided on religious grounds. India embraced the Hindu community and Pakistan became the seat of radical Islamism.

In addition, the book pointed to a significant and dangerous point in the role of Pakistan as an ideological and logistical resource for the Islamic groups, "Army officers" who carry radical and sectarian ideas. The researchers also provided some examples of the existence of those who represent a breakthrough for the military establishment, who discovered the Pakistani army belonging to Hizb ut-Tahrir, and his defense of the late al-Qaeda leader, Osama bin Laden and criticized the government for its involvement with the United States in the killing, and accordingly was tried militarily in February 2012.

In addition to the military, the book has reviewed some models of parliamentarians and politicians with motivation and beliefs to embrace violence and extremism, and their role in leading small groups of citizens, youth and students to embrace those ideas.

The book draws attention to the nature of the economic resources on which the extremist movements rely to finance their elements and operations, offering the Taliban as a model of religion that eats from theft and forbidden trading. According to the researcher, they steal commercial trucks passing through the port of Karachi. The state treasury is suffering heavy losses, in addition to imposing a "payment for traffic" policy, which means that commercial companies have to pay money to terrorist groups to pass goods.

It is worth mentioning that the book has included in its chapters pages to defend the former President of Pakistan Pervez Musharraf along with other heads of successive governments, describing them as leaders in fighting terrorism.