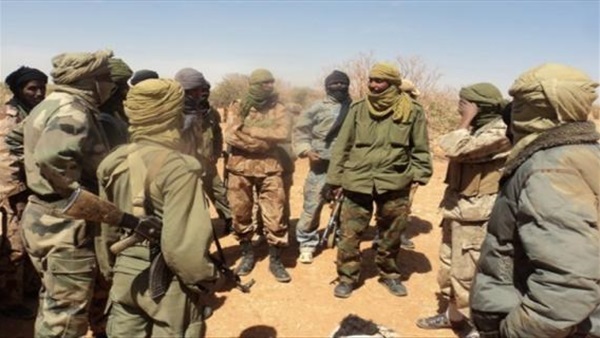 Two ageing soldiers lie in a foxhole waiting for the artillery to open fire on the desert frontline of Africa’s last colony.

Their men have driven rickety Toyota trucks mounted with anti-aircraft guns and missile launchers into a sandy valley below the fortified Moroccan sand wall that snakes through Western Sahara’s barren interior.

Then the shooting starts.

“We got one,” says the sullen older commander, pointing to a plume of black smoke creeping upwards into the desert sky. The Moroccans reply. Missiles landing in the desert make dull thuds and shake the ground as they throw up clouds of sand and dust.

The sizzles and thuds of the artillery duel along the 1,700-mile Berm wall, second in length only to the Great Wall of China, is a scene that has been playing out every day since a 29-year cease-fire was dramatically shattered last year.

In December 2020, Donald Trump’s outgoing administration recognised Morocco’s sovereignty over the disputed and phosphate-rich territory of Western Sahara, which hugs Africa's west coast, in a quid-pro-quo for Rabat recognising Israel.

The shock intervention was a blow to the Polisario Front, the movement that has been fighting for Western Sahara’s independence since the 1970s. The war had begun again just a month earlier, when Moroccan soldiers entered a demilitarised no-man’s land to remove protesting Sahrawi civilians, abandoned and frustrated with a stalled UN peace process.

Now, after offering rare access to the re-ignited front line of the conflict, Polisario fighters have told The Telegraph they want to take the war out of “first gear” unless the international community rallies to their independence cause.

The fresh war cries come after another round of unexpected attention for the freedom fighters in May this year.

The ageing Polisario leader sought medical treatment for Covid in Madrid - much to the anger of Morocco.

In retaliation, in scenes that shocked the European establishment, Morocco opened the gates to a wave of migration into Spain. Thousands of asylum seekers were allowed to scale fences and swim past a barrier with babies and children to enter the Spanish enclave of Ceuta.

The resolve of the Polisario in the windswept deserts of Western Sahara strengthened.

Ignored by the UN diplomatic process and tired of legal knockbacks in European courts, they now seem to be left with little option but to try and intensify the fighting in Western Sahara.

“We must move to the next phase,” Bachir Mustapha, 69, a senior adviser to the Polisario Front’s leadership, tells The Telegraph. “This new gear demands much more sustained action with greater force.”

Polisario is one of the last fighting relics of Africa’s long and bloody struggles for independence, hence Western Sahara often being referred to as Africa's last colony.

Morocco, which controls four-fifths of Western Sahara, invaded as Spain withdrew in 1975. It fought a bloody desert war against the Algerian-backed Polisario, which also drew help from Cuba and Libya, until 1991 when both sides agreed to a UN peace process that was supposed to conclude with a referendum on independence.

Three decades later, the 173,000 Sahrawis who live in desolate refugee camps in the remote desert of south-western Algeria are still waiting.

In the Polisario-held sliver of territory that the Sahrawis call "our liberated zones", soldiers pitch a lonely camp under one of the rare thickets that dot the landscape. The relief of a Cold War-era fight coming back to life is etched into the faces of elderly commanders and young soldiers.

“We couldn’t wait any longer,” Omar Deidih, 23, tells The Telegraph, in Spanish with a clipped Cuban accent. In immaculately tented fatigues and wrapped in a tightly wound scarf, he quotes the poems of the Cuban Communist Party that he learned as a student in Havana. “If you aren’t there for the fight,” he adds, “it is as if you are never there.”

Omar fancies himself as a Guevara-esque figure.

“I am lucky to carry this,” he says, tapping his AK-47. “I tell my comrades that when you are fighting in a revolutionary cause, every shot you fire carries meaning. It is not just a shot in battle – your bullet carries the misery and pain that you yourself have carried in your exile from your homeland.”

Nearby, more down-to-earth men are brewing tea under the stars – in the distance, another artillery duel is taking place.

“We want the war to escalate,” says Nejm Najat, 28. He peers through cheap sunglasses and lights a cigarette on the fire in front of him. “War is the only way we can liberate our land.”

“If I wasn’t born a refugee,” he adds, “I wouldn’t have been a soldier – but how could I not have been? My thoughts throughout my entire life have been dominated by the same question: how can I liberate my land?”

The soldiers are paid $100 every three months to spend weeks in the desert, away from their families in the refugee camps.

Nejm takes a swig of tea. “We,” he gestures to the three men sitting around him, “we’re not scared of fighting.”

Tyre tracks criss-cross each other through the desert, pointing the directions towards previous hit and run raids that the Polisario troops specialise in.

Every so often, the men sitting around the fire shoot a glance towards the night-time stars that gave Antoine de Saint-Exupéry the inspiration for The Little Prince. The soldiers are scanning for drones.

Moroccan surveillance drones, which began appearing in the months after the fighting restarted, flash like twinkling stars.

Drones have forced Polisario to change how they fight. Sahrawi soldiers fight and move like nomads, but now when they pass the last Algerian checkpoint and begin to dash through the empty Mauritanian desert towards Western Sahara, they turn off the lights on their trucks. They cover the dashboard with tape. “Watches off,” they order, “the drones can see the moon’s reflection.”

Algeria’s recent diplomatic crisis with Morocco, however, has raised hopes among Sahrawis that Algiers will provide them with better weapons to match the steadfast diplomatic support Algeria has provided. Greater Algerian support risks enflaming tensions in a region that is already approaching boiling point.

It is difficult to see how an escalation could take place – Morocco’s high-tech army has dug-in further. One Polisario leader, Mohamed Akeik, who was recently appointed chief of staff of the Sahrawi army, says that trying to target sites in Moroccan-occupied areas by bypassing the Berm or activating Polisario cells there is possibility.

As Sahrawi soldiers’ trucks rattle through the desert, the sun rises over a landscape that is stripped to its minimum: land and sky. It is bleak. It hasn’t rained since 2016.

At home, shepherds’ herds are being struck by disease – even the camels are finding it harder.

In Boujdour refugee camp, five-year-old Hasan ducks in an out of the building where his family has been living.

“I want to be a solider when I grow up. I’m going to have a Toyota, a gun, and I will put my brothers in the Toyota, and we will go to war,” he says with a smile.

The Israelites wandered a desolate desert for  40 years before being led into their promised land. The Sahrawis, who still believe that their time will come, may yet have to wait forty more