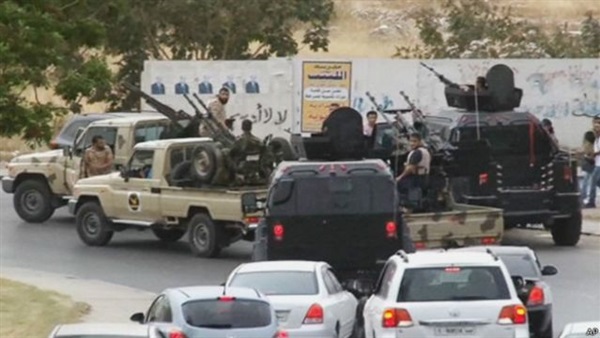 “Mosul has been looted. They have seized everything. Why not? They control everything, the state, laws and even the people’s lives,” says taxi driver Mohammed al-Hamdani, 56, as he wipes the sweat off his brow.

He told Asharq Al-Awsat that militias and other influential figures in power have “systematically looted everything, from real estate to properties to projects.”

“No one has been spared, not even the state. They even occupy government positions and enjoy political representation,” he said angrily.

“Despite all of this, you must keep you mouth shut because they say that they have liberated the city from ISIS and protected it from terrorism,” he added.

Hamdani added that even archeological sites, green spaces and plots dedicated for schools and hospitals have been sized by the armed factions, some of whose members do not even hail from Mosul.

Abu Firas, 49, is a native of the city. He has spent his life there but almost lost everything if an acquaintance had not warned him that some powerful sides were seeking to seize his properties using forged documents.

He was informed that a group of people, believing that he had immigrated, had sought to purchase his property and had even planned to turn it into a residential zone.

He found out that the people had claimed to be part of a housing agency that had officially seized ownership of the property. “After a relative intervened, it informed me that an error had been found in the property documents and it abandoned the project,” continued Abu Firas.

The real estate and properties sector in Mosul is mired with major problems. State property is purchased and sold illegally, plots dedicated for certain projects and parks are turned into residential areas and even ancient ruins are violated.

The violations are a result of a monopoly by so-called economic offices that are affiliated with some parties that are backed by powerful armed factions in Mosul.

The situation had gotten so dire that the Justice Ministry ordered the closure of the real estate registry in Mosul. The prime minister had at the beginning of the year dispatched a committee to the city to probe the violations after journalist investigations uncovered the involvement of state employees and powerful parties in real estate fraud. An integrity committee in the Nineveh province has so far uncovered 844 cases of real estate violations.

Urban planning expert Firas Salem al-Sayegh said the urban planning of a city requires the dedication of areas for green zones and public institutions, such as schools and health centers.

Such areas are almost scared and cannot be altered no matter how great the urban expansion because they are the lifelines of any city, he told Asharq Al-Awsat.

In Mosul, more than 70 percent of such spaces have been illegally seized given the absence of official management and they have been turned into residential areas, he revealed. The situation will present a challenge to any future government in planning the city whereby it will be unable to dedicate plots for schools or hospitals because residential buildings have been built on them.

The Justice Ministry has vowed to crack down on violations and people involved in forging real estate documents and selling them to figures affiliated with powerful militias in Mosul.

Nineveh MP Hassan al-Allaf revealed that the violations have cost the state 5,000 dunums of land. He held employees at the real estate registration office on the west side of the city accountable for “forging documents and stealing properties.”

A real estate registration office employee in Nineveh revealed to Asharq Al-Awsat that people claiming to work for housing agencies have made it a point to purchase any property owned by the state.

Speaking on condition of anonymity, he said that these sides are aided by some influential figures so that they can seize these properties and sell them to citizens to make millions of dollars.

Moreover, he revealed that over 9,000 public and private real estate files at the registration directorate have been declared missing and “everyone has been helpless to prevent it.”

Members of the Popular Mobilization Forces (PMF) have gained the most from the forgery of official real estate documents, he went on to say. They even force employees to forge the documents.

“No one dares to challenge the perpetrators because they control everything. They can easily spitefully charge someone with belonging to ISIS, which will lead to judicial proceedings and even a death sentence,” he added.

Despite the threat, Mosul has witnessed a wide campaign of arrests that targeted government employees accused of forging documents of real estate properties owned by the state, Christians and even ISIS members. A gang involved in the forgery was arrested in January.

Even archeological sites have not been spared. Forgeries have reached properties owned by the archeological authority leading to the demolition of parts of the ancient wall of Nineveh in March, prompting outcry on social media.

The local government in Nineveh denied that some of the wall was bulldozed, saying that images of the alleged damage date back to the time when ISIS was in control of the area.

Elsewhere, property in the archeological heart of Nineveh city has been seized and turned into a residential area, said activist Ahmed al-Khaledi.

He told Asharq Al-Awsat that the al-Rahmaniya area has been transformed into a residential zone even though the state has not approved such a move.

Authorities have long barred such building licenses in that area, he explained.

The same thing happened in the archeological al-Tal area near the Nabi Younis Mosque. It has been transformed into a shopping complex after the Shiite Wafq seized the property, he said.

Private property has also been violated by groups specialized in forgery and real estate fraud. Christian citizens, who fled Mosul, and ISIS members have been their favorite target. The groups have exploited their absence from the city to seize and sell their property.

Abu Firas revealed that the groups have attempted to seize his property because they wrongly believed he was Christian.

Lawyer Shaker Samir said dozens of Christians have filed complaints and lawsuits against a forgery gang that was arrested at the beginning of the year.

He added that the majority of the cases remain open because it is difficult to prove the people’s ownership of the land after the accused permanently removed their real estate records from the official register.

This only underscores the immense challenges ahead in countering the violations and restoring the rights of the people, he added.

“The problems they leave behind may never be resolved,” he warned.