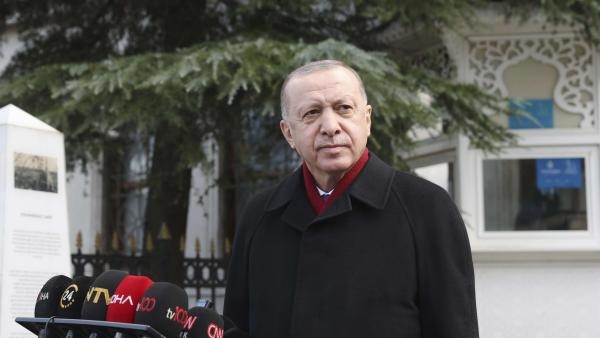 Turkish President Recep Tayyip Erdoğan will call and ask for a meeting with U.S. President-elect Joe Biden, after he takes over the office on Jan.20, Çavuşoğlu said on late Thursday, Turkish press reported, but added that he ''would not know where the meeting may take place at the moment.''

When asked if any 'interaction' has been made with the incoming Biden administration, according to pro-government media, Çavuşoğlu said, ''no, they told everybody that Biden has an order of not meeting with anyone until he takes over.''  The relationship between two NATO allies, Turkey and the United States has went sour in the recent years. Turkey’s purchase of Russian defence system S-400s highlighted the deteriorated relations which has ended with U.S. sanctions against Ankara in December.

On his return from a three-day trip to Pakistan, Çavuşoğlu told the reporters that despite the ups and downs experienced in U.S. relations, there are also opportunities and Turkey would not be biased by previous experiences, “expecting the same from the United States, as  Biden administration is very well aware of the importance of Turkey’s strategic location,” he said. Çavuşoğlu also added that Turkey is preparing a roadmap for the future relationship with the U.S. administration.

Çavuşoğlu said Ankara is getting ready for the Biden era and will set up a working group for a joint committee to work on the U.S. concerns regarding S-400s’, Milliyet said.

Çavuşoğlu expressed his will for overcoming the People’s Protection Units (YPG) issue between two countries as Turkey sees YPG as a part of outlawed Kurdistan Workers' Party (PKK) that has been fighting for self-rule inside Turkey for more than 30 years, while the United States

designate PKK as a terrorist organisation but do not define YPG as one. Turkey accuses United States for supporting and training YPG fighters.

Çavuşoğlu said that Turkey is familiar with most of the names who will serve in senior positions in new U.S. administration from former President Obama era, “but this does not mean that the previous connections will resolve all the problems,” he added.