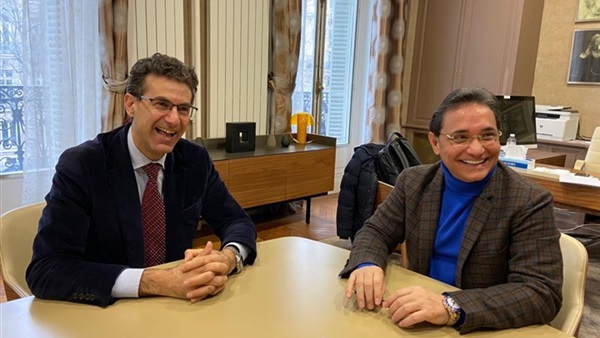 The French president invited the Egyptian leader for a state visit. Then on Monday, during a joint press conference with Sisi at the Elysee Palace, Macron talked up Egypt’s counterterrorism record.

The two leaders talk about many issues most prominently the Turkish intervention in the Libyan civil war.

President Abdel Fattah El-Sisi was received by President Emmanuel Macron and discussed in a diplomatic manner, human rights file, especially since the two parties agreed that political realism is the basic basis for the common interests of geo-economic and security.

They talk on several strategic files: Libya, Erdogan's threat in the Mediterranean, political Islam, combating terrorism, and the signing of economic agreements.

The summit between the two leaders also touched on the threat of terrorism and the Turkish crisis and Erdogan, who is trying to enter the territorial waters of the Greek, Cypriot and Egyptian, which contain important wealth of natural gas.

This is why we interviewed Dr. Abdul Rahim Ali, a journalist and expert in the affairs of Islamic movements and author of many books in this field.

Ali fought the Brotherhood for two decades, whether under President Hosni Mubarak or during the era of President Sisi. This is in order to dissolve this group, as he considers the Brotherhood to be the source of political Islam, terrorism and terrorist organizations throughout the world.

Ali revealed that the Muslim Brotherhood took root and grew in European capitals like Paris only with the aim of controlling the West.

While the European Union and the United States of America did not take any step, Egypt and the United Arab Emirates did by prohibiting and preventing the Muslim Brotherhood from operating on their soil.. 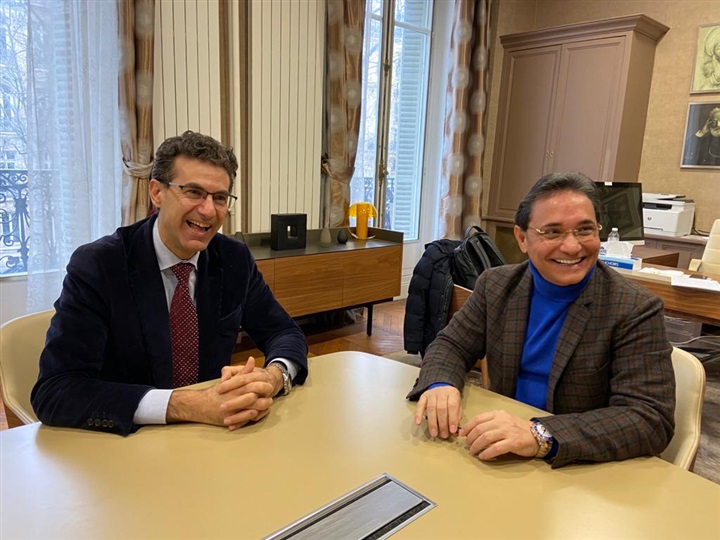 Can we talk about a convergence of geopolitical views between Egypt and France regarding the Mediterranean turmoil, Libya and Turkey?

- Of course, there is a great rapprochement between the two countries and Presidents Sisi and Macron in the Turkey file, especially the rampage that Erdogan is carrying out in the eastern Mediterranean region and his attempts to seize the newly discovered gas fields that are shared by Egypt, Cyprus and Greece.

Egypt puts Erdogan on many red lines in Libya and in the Mediterranean, and France shares with the NATO alliance in maritime oversight in this region and recently contacted a number of Turkish naval vessels that were carrying weapons to Libya, in addition to the position from the Libyan interior and the two countries' confrontation with Erdogan's ambitions for control. Libya must support the Brotherhood’s militia in the West in an attempt to put its hands on the entire Libyan soil and obtain the largest share of Libyan gas due to Turkey’s importing huge quantities of gas costing more than five billion dollars every year.

- The West, the Obama government and the European Union have directed many lessons (criticisms) to the Sisi government regarding human rights, accusing it of oppressing the Muslim Brotherhood since 2013.

However, France differs from the United States and European countries since President Macron understood the danger of the Muslim Brotherhood in this regard.

Of course, the congruence is very clear in the two countries ’vision of the idea of ​​a balance between human rights and confronting terrorism and political Islam groups that use these ideas as a pretext to commit the two crimes of spreading hatred and separatist ideology, which is what France suffers from in particular with regard to what it called French Islam, which it hijacks in thought and institutions The Brotherhood .. The separatism law that Macron will present to the French Parliament next Wednesday is very similar to the terrorist entities law that President Sisi presented to the Egyptian Parliament last year, upon which the Brotherhood’s funds were confiscated and their organization and associations restricted.

Does President Macron confirm his alliance with the Egyptian-Emirati axis against Qatar and Turkey, the Muslim Brotherhood?

I can affirm this idea by one hundred percent with regard to the axis of Turkey and the Muslim Brotherhood, the Qatari axis remains, because it is a little different.

The French position, and specifically President Macron’s position, is still in place with regard to Qatar due to the economic entanglements that Qatar has been able to do for more than ten years in France in All real estate, sports, transportation, and other economic activities, in addition to that, Qatar was able to create what could be called a Qatari lobby that works for it in France.

How did the image of France become in Egypt? Did Sisi defend Macron and Paris against the campaign to demonize France?

Let us clarify two basic things; Egypt, the government and the people, are against insulting the Prophet of Islam through what Charles Abdo published cartoons, and Muslims anywhere in the world cannot understand this under any of the provisions.

The second thing is that we appreciate President Macron's position on Islam and we are well aware that he was referring to political Islam groups that hijack Islam in France.

We are also aware that the French president is governed by a secular constitution that gives full freedom to citizens, writers and journalists to express themselves and their ideas, but let me remind you that when it came to France's national security, President Macron issued the separatism law and took a number of exceptional measures for French national security.

We were angry in Egypt as a result of President Macron's recent statements, but we realized the attempts by Turkey and the Brotherhood to exploit the situation, and soon the rudder was adjusted, and many newspapers and sites in the Egyptian media began to support the French President, in the belief of Egyptian journalists and media figures in his sharp and serious confrontation with terrorism on the one hand and the size of the partnership With Egypt and President Sisi on the other hand. 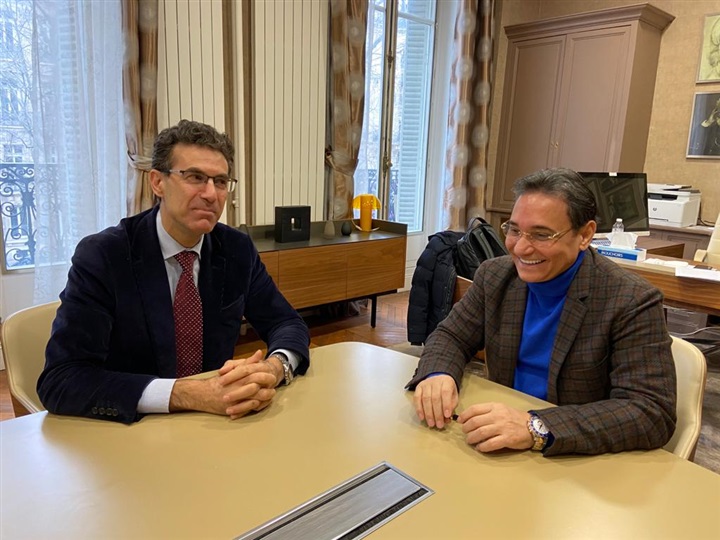 The Middle East Studies Center (CEMO), which you preside in Paris, organized a seminar on the law of Islamic separatism, in the presence of the courageous French MP Jacqueline Ostache-Brineau, Le Figaro Editor-in-Chief Yves Triard, Emmanuel Razavi, and a number of experts and analysts. Do you support the articles of this eternal law fighting Islamic separatism?

- During that important seminar, I enjoyed very well the reservations made by my friends Yves, Representative Jacqueline, and the rest of the experts participating in the seminar.

There is nothing claiming Islamophobia or that there are articles in a law against Islam and I declared 100% support for this law, which fights associations, extremist preachers, fanatics, fundamentalists, groups and groups.

There are three problems that face us when we address the issue that France calls "the reorganization of French Islam".

Is that the French officials make a mistake when they deal with the Islamic question, as they previously dealt with "especially Napoleon" with the Jewish issue in France?

The differences here are large and numerous, and it is sufficient to point out only one of them, which is that the Jews were looking for integration in France, while the Islamists today are looking for separation.

Confusion between Islam as a religion and between Muslims as French citizens and immigrants ... misplaced confusion...

Muslims have their political and intellectual affiliations, and their cultural paths, and the unification between them and Islam as a religion makes them arm themselves to defend their religion regardless of their differences, so they fall prey to organized groups, whether the Brotherhood or Milli Gros (the Turkish version of them).

All the projects that aimed to reorganize what was called Islam in France, starting with the Jean-Pierre Chauenmun project in 1999, passing through the Sarkozy project in 2003 and up until now, were seeking help from the makers of the crisis to contribute to solving it, as is happening now when the French government assigned the task of creating a charter of Islam in France for a group of half of them Belong to the Muslim Brotherhood.

What happens throughout those years is that those who are chosen to organize the relationship between Islam and the French state are using this governmental recognition of them to strengthen their situation among Muslims and claim to represent Islam itself in France. This deepened the crisis rather than solving it.

In your opinion, dismantling those organizations and associations related to the Brotherhood and organizing them is the solution for France?

Ali said that dismantling the Brotherhood is the solution, explaining that the dismantling of this organization in all its social, economic and cultural manifestations is the duty of the moment in France.

the new anti-separatism law may contribute to a part of that dismantling process, but it will not be sufficient, as the Brotherhood is known for its ability to adapt to all circumstances and has skill in overcoming all the obstacles it faced throughout its history. The Egyptian experience in facing the Brotherhood organization is the best proof of that.