How Turkey's export of political Islam turned zero problems to many 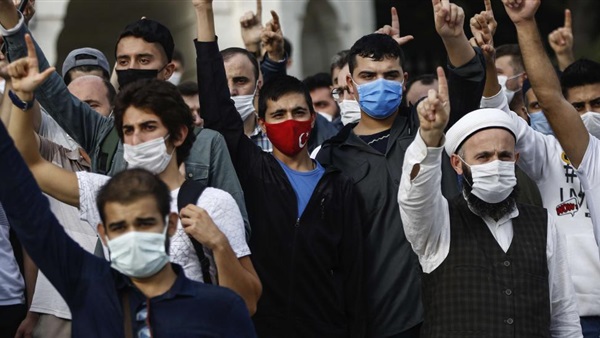 Turkey cannot have all its military adventurism abroad without a strong economy to back it up, Dr. Marwa Maziad, a non-resident scholar at the Middle East Institute (MEI), told Ahval in a podcast.

Turkey, which is presently locked in several conflicts and is suffering from an economic crisis, is more isolated and reliant on hard power to achieve its aims than only several years ago. These factors may contain the seeds that undo the Turkish government’s ambitions as hard power becomes its remaining tool to achieve any of them.

Maziad noted how Turkey in the last decade went from a non-disruptive regional player that sought “zero problems with neighbours” to a more belligerent, lonely character. She said the combination of an unsteady economy and military adventurism abroad may become self-consuming.

Turkish forces have launched major offensives against Kurdish armed groups in Syria and Iraq, supplied hardware, fighters and know-how for a military confrontation with the United Arab Emirates-backed opposition in Libya, backed Azerbaijan in its post-Soviet territorial conflict with Armenia and confronted Greece and Cyprus over territories in the eastern Mediterranean.

“Eventually, Turkey will not be able to supply funds to sustain all of these military adventures,” she said.

On the political front, Turkey and NATO ally France have become locked in another war of words following French President Emmanuel Macron's recent remarks on Islam.

Following the gruesome murder of French schoolteacher Samuel Paty earlier this month, Macron announced plans to combat what he referred to as “Islamist separatism” in France. He described Islam as “a religion that is currently experiencing a crisis all over the world”, sparking outrage in Muslim-majority nations.

The overtones of the debate carry a degree of ‘clash of civilisations’ rhetoric that pits largely Christian Europe against their Muslim-majority neighbours like Turkey. However, Maziad, who authored an analysis on Turkey’s exported brand of Islamism, said that a debate has to be held on the nature of Islamic instruction in Europe. “Macron was right to state what he is going to do,” she said.

Maziad pointed to Macron’s speech on Oct. 2 in which he called out foreign powers, specifically Turkey and Qatar, on their role of contributing to a counter-culture in France through their export of pan-Islamist ideals. She said France was within its right to assert influence over how Islam is being taught in the country, particularly by foreign-educated imams.

“It has to be a French Islam, meaning the Islam of the Muslims of France and not the Islam of a country with pan-Islamist, nationalist, political ambitions in the region,” Maziad said, in reference to Turkey.

Maziad stressed that the issue should be confronted without fear that any opposition would be twisted into a civilisational conflict. To support this contention, she identified several nations in the Middle East who reject Turkey’s attempts to exert dominance over their political and religious life, such as Tunisia.

Turkey’s foreign policy initiatives have not been limited to France this year.

Turkey maintains a tenuous set of ceasefires negotiated with Russia in the Syrian and Libyan civil wars, where both countries provide military and political support to opposing sides.

Meanwhile, Ankara had continued to seek concessions from Moscow in the conflict between Armenia and Azerbaijan over the breakaway state of Nagorno-Karabakh. Turkey has strong relations with the Azeri government, while Russia has a defence pact with Armenia, its traditional ally.

Turkey is also locked in a months-long standoff with EU members Greece and Cyprus over offshore hydrocarbon resources and disputed territory in the eastern Mediterranean.

However, the state of many of these conflicts could change dramatically pending the outcome of the Nov. 3 United States presidential election. Turkey has found an ally in President Donald Trump over the years, and his challenger, former vice president Joe Biden, has spoken out against the Turkish government throughout his campaign.

When asked whether a Biden victory could tip the scale against Turkey in any of these regional disputes, particularly in the Middle East, Maziad said the shadow of the Obama administration’s missteps hang over the former vice president.

She cited then President Barack Obama and Biden’s failure to consider regional dynamics when, in some cases, they promoted Islamist parties such as the Muslim Brotherhood during the Arab Spring. Obama’s early embrace of Turkey as a model of Islamic democracy lost all meaning as Erdoğan, who was prime minister at the time, consolidated his rule at home and preached a form of Islamist politics rejected by other countries in the region.

Under Trump, Turkey’s neighbours have responded to the U.S.’s drift away from the Middle East that was initiated during the Obama years, most notably through a series of normalisation deals between Arab states and Israel. Trump announced on Oct. 23 that Sudan was the latest in line to pursue this route.

Maziad said despite whether or not Biden replaces Trump in the White House come January, regional players have taken it upon themselves to adapt to a new reality where Turkey is seen as an urgent threat.

“A Biden administration can try to set tones as much of it wants, it can try to shift direction but there are regional dynamics for regional players,” Maziad told Ahval. “They see their own perceived threats, they respond to them and they change policies accordingly.”