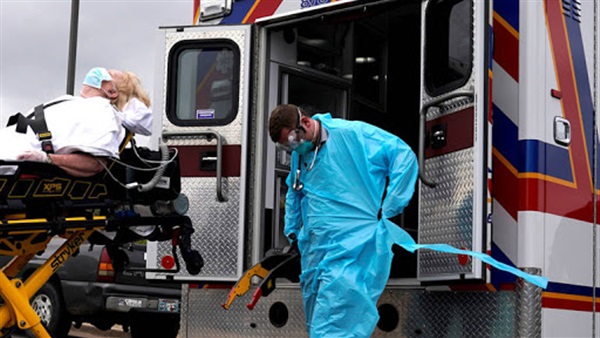 In one of the rare expressions of empathy that Donald Trump has displayed during the course of the coronavirus pandemic, he talked earlier this month about the disease claiming so many lives it was “filling up Yankee Stadium with death”.

Now the death toll from Covid-19 stands at almost twice the capacity of the Yankees’ home stadium, and has reached another booming landmark: 100,000 deaths.

A country that prides itself on its exceptionalism can now without ambiguity claim that title for its experience of the virus. The United States stands head and shoulders at the top of the world league table of confirmed cases, as well as the total number of deaths.

There will be much to analyse in coming years about how the US responded to this contagion, including how many lives have been lost needlessly as a result of Trump’s maverick response.

Already one lesson of the pandemic is clear: America’s deep and brutal fault lines – of race, partisanship, gender, poverty and misinformation – rendered the country ill-prepared to meet the challenges of this disease. The ravages of Covid-19 have revealed the deep cracks in the glittering facade of the richest and most powerful nation on Earth.

Covid-19 is supposed to be an equal-opportunities killer. It willingly ravages the lungs of any American, regardless of their skin color or visa status.

But as America passes the 100,000 death mark, it has become abundantly clear that the pandemic amounts to a racial disaster of stunning proportions. Figures compiled by APM Research Lab from 40 states show that African Americans are being killed at almost three times the rate of white people.

Black Kansans are seven times more likely to die from the virus than white Kansans. In Missouri, Wisconsin and Washington DC the ratio is six times.

Such grotesque distortions are most visible in New York City, that giant laboratory test into virulent racial inequity. Data released this week showed that when the city’s zip codes are ranked according to highest death rates, eight out of the top 10 have majority black or Latino populations.

None of the 10 are in wealthy, largely white Manhattan.

A woman waits for a bus near a coronavirus testing site in Brooklyn.

The Trump administration says black Americans’ high death rate is because they were already unhealthy. They have “greater risk profiles”, as the health secretary, Alex Azar, put it. It is true that diabetes, hypertension, obesity and other underlying health conditions are prevalent in many black communities. But focusing on these co-morbidities is tantamount to victim-blaming.

In an election year, that would suit Trump very well. What better way to deflect attention from his administration’s dire handling of the pandemic than to swing the spotlight on to the dead themselves?

Decades of segregation, decrepit housing, joblessness, stress, police brutality, poor hospitals, lack of health insurance, failing schools – these are also relevant factors that the White House tends to gloss over. So too is the discrimination in access to testing and treatment for coronavirus that has increased the chances that black people contract and then die from the disease.

America has become a failed social experiment, a decayed empire that is unable to meet the basic needs of its people

Cornel West, the Harvard philosopher, activist and writer, argues that you have to dig deeper to find the source of such disproportionate fatalities. “The virus encounters deeply racist structures and institutions already in place, against the backdrop of wealth inequality, a militarized state and a commodified culture in which everybody and everything is for sale,” he said.

For West, the pandemic has revealed nothing less than the country’s demise. “America has become a failed social experiment, a decayed empire that is unable to meet the basic needs of its people.”

When the US has endured past attacks by stealthy enemies – Pearl Harbor, say, or 9/11 – there has been some effort from the White House down to rally the nation around a common defense. Not so this time.

When Americans are asked about key policies relating to coronavirus, such as when lockdown should be eased and economies reopened, their answer is starkly partisan. A survey by the University of Chicago found that 77% of Democrats want lockdown restrictions to remain in place for as long as needed to protect health, while only 45% of Republicans take that view.

Trump has adopted a similar partisan stance. Instead of acting for the nation as a whole, he has favored party political point scoring ahead of November’s presidential election.

Mike Pence listens as Donald Trump speaks during a coronavirus taskforce briefing at the White House.

Republican states such as Florida have received all the emergency medical supplies they requested from federal government. Democratic ones have gone short-changed.

Trump admitted he rebuffed the calls of Democratic governors who “don’t treat you right”. He threatened financial penalties against Democratic states trying to make absentee voting easier during the pandemic.

To Kamala Harris, the former Democratic presidential candidate, such moves indicate that the president is “worried about the outcome of the upcoming election rather than the safety of people”.

Harris, a US senator from California, told the Guardian that for many citizens, especially African Americans, the consequences of such partisan posturing “are life and death. In a matter of months, 100,000 Americans have died. That’s more than 40 times those who died in Pearl Harbor.”

Among the 100,000 victims, there are partisan fissures, too. It is no surprise that Democratic parts of the country have suffered greatly as they include the big cities such as New York and Chicago where the virus has struck most aggressively.

Across the US, Reuters has reported, counties that voted for Hillary Clinton in the 2016 presidential election have recorded 39 deaths from Covid-19 per 100,000 residents, three times the rate of counties who went for Trump.

For Harris, it doesn’t matter what party a victim supports. “We must remember that each death is one too many. This is a moment where we all – regardless of our position or title – must come together to lift the American people up.”

One of the paradoxes of coronavirus in the US is that while men are dying in greater proportions, it is women who suffer most while living with the pandemic.

In New York City, men are dying at almost twice the rate of women. Yet in every other aspect of this epic contagion, the load is being borne by women. Most of the frontline health workers, including nine out of 10 nurses, are female, putting them in the thick of the storm.

Then there’s the tidal wave of US unemployment: 55% of the jobs lost last month were held by women.

Within the lockdown at home, women are also shouldering the burden, whether they are one of the 80% of single-parent families in the US who are headed by women or are in a heterosexual relationship and taking on the lion’s share of homeschooling. That’s before you consider the normal imbalance in childcare and household chores that has intensified.

Rebecca Solnit, the influential writer whose book Men Explain Things to Me gave rise to the phrase “mansplaining”, pithily summed up the impact of the pandemic for American women. “Everything wrong with life at home got a lot wronger,” she said.

Solnit pointed to the contradiction that while most face masks are being voluntarily sewn by women, men are far more likely to refuse to wear the protective items on grounds they show “weakness”. Displays of reckless masculinity start at the top – Trump recently toured a mask-making factory in Arizona without wearing a mask.

Solnit offered the Guardian a couple of remedies for the pandemic of men behaving badly during the pandemic. “Divorce may be one treatment in some cases,” she said, “feminism liberally applied across all parties the only known cure.”

Coronavirus in America is a disease of the poor. That’s the view of the Rev William Barber, co-chair of the Poor People’s Campaign.

“People are being forced to work, putting profit over protection,” he said. “This pandemic will highlight how poverty – and our willingness to let people remain in it – presents a clear and present danger for all of us.”

Barber, a leading voice on the scourge of income inequality which saw 41 million people officially living in poverty even before the virus made landfall in the US, also pointed out that coronavirus is a disease that benefits the rich. “Billionaires have made nearly $500m while essential workers have not even been given guaranteed health care, a living wage or a water supply that is protected from being shut off,” he said.

As with race, the fault line of inequality is glaringly obvious in New York City, where more than 21,000 of the 100,000 have died. Many low-income New Yorkers in the outer boroughs are obliged to risk their lives by turning up for work every day, branded as “essential workers”, while Manhattan’s wealthy neighborhoods have become virtual ghost towns after their residents fled to vacation homes.

It will take time for the full extent of mortality among low-income Americans to be known, but anecdotally it is clear the poorest counties have been hit hardest. That’s evident in southern states such as Louisiana and Alabama where low-income people have been dying in high proportions through a combination of lack of health insurance, hospital closures and policies pursued by southern governors that have exposed vulnerable citizens to danger.

There is nothing new in any of this for the beleaguered souls now feeling the full force of the virus’s wrath. But coronavirus has made an old story newly visible, as the endless lines at food banks now attest.

The infodemic of misinformation that has battered the country over the past four months starts with the misinformer-in-chief: Trump.

From the start of the crisis, the president has shown disdain for the facts. On 27 February, the day the country first mourned a death from Covid-19, he predicted the virus “will disappear” like a “miracle”.

He has gone on to spread unfounded claims that coronavirus started in a Chinese lab. He also promoted untested and potentially life-threatening treatments, including disinfectant and the anti-malaria drug hydroxychloroquine, which he revealed he is taking himself – against the advice of his own administration.

Trump’s embrace of untruths has emboldened peddlers in misinformation, including sellers of bleach as a miracle cure. And it has imperiled lives. A man in Arizona died, and his wife was hospitalized, after they took chloroquine phosphate – used to clean fish tanks.

All that forms part of an unparalleled wave of misinformation that has swept the US. “I have never seen so much of this stuff,” said Claire Wardle, director of First Draft, a nonprofit that tackles misinformation worldwide.

Early on in the crisis, rumors that lockdown would see the government impose martial law began to circulate through closed-messaging apps and texts. Over the last six weeks there has been an explosion of conspiracy theories on social media, epitomized by the Plandemic documentary, which claimed a cabal led by Bill Gates were exploiting the virus to seize power.

Wardle has been surprised how quickly conspiracy theories have erupted into the mainstream. “You have high school friends and mums and aunts who would never normally share this material now on it.”

Wardle sees the vast proliferation of misinformation as a result of deep uncertainty about the pandemic, combined with a paucity of quality information following the collapse of the US news industry, which has itself been accelerated by the virus’ economic impact.

Bad information cost lives. It can encourage states to reopen their economies precipitously and lure individuals to drop their guard and expose themselves to the virus.

Wardle said: “Historians are going to look back on all of this and have a much clearer idea of how misinformation led to real-world harm – and death.”