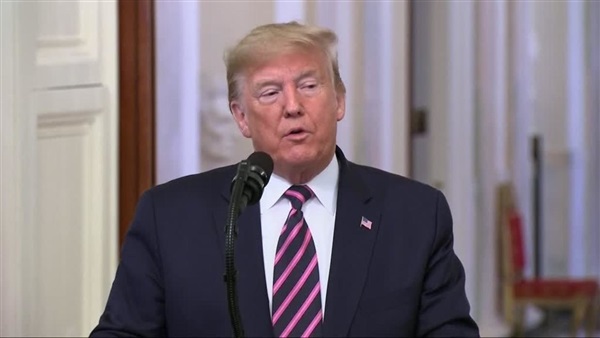 Donald Trump delivered a triumphalist, mocking, vitriolic and vulgar speech in the White House on Thursday afternoon in celebration of the acquittal at his impeachment trial the night before in the US Senate.

In ebullient mood, the US president held up the front page of the Washington Post with the headline “Trump acquitted” and said: “I went through hell, unfairly, I did nothing wrong.” Then he asked for the newspaper to be framed.

Speaking in the East Room, filled with senior administration figures, Trump family members and Republican members of Congress, who repeatedly broke into applause, Trump said: “This isn’t a news conference, it’s not a speech – it’s a celebration.”

He began by blaming “dirty cops” in the US intelligence community for investigations into, first, his dealings with Russia during the 2016 election and then last year a pressure campaign on Ukraine to investigate his Democratic rivals, which became the prompt for the impeachment investigation.

“It was corrupt, it was dirty cops and this should never happen to another president, ever. It’s a disgrace … it was bad people. If this had happened to President Obama a lot of people would have been in jail for many years,” he said.

Trump was acquitted in his Senate trial, which was the denouement of a four-month investigation, on both of the articles of impeachment he faced – charges of abuse of power and obstruction of Congress, for threatening the Ukrainian government by withholding military aid until it agreed to investigate Trump’s domestic political rivals, then blocking witnesses and evidence from congressional investigators.

The acquittal vote along party lines shortly after 4pm local time in Washington on Wednesday ended the threat that Trump would be removed from office and concluding the impeachment process.

Senators voted to find Trump not guilty, despite some Republicans declaring that Trump’s conduct in relation to Ukraine had been seriously inappropriate, and Democrats accusing the president of using foreign connections to cheat in the 2020 election.

Trump became the third president in US history to be impeached by the House of Representatives but acquitted in a Senate trial. A two-thirds majority of 67 senators would have been required to remove him.

Mitt Romney was the only Republican to vote in favor of convicting Trump and became the only senator in history to vote to remove a president from his own party in an impeachment trial.

“I support a great deal of what the president has done,” Romney said on the Senate floor. “But my promise before God to apply impartial justice required that I put my personal feelings and political biases aside.

“The president is guilty of a flagrant abuse of public trust. Corrupting an election to keep oneself in office is perhaps the most abusive and destructive violation of one’s oath of office that I can imagine.”

Nevertheless, Trump has taken his acquittal as a victory for his administration, his party and above all himself.

The speech on Thursday quickly turned into a screed against all of the investigations into his administration, starting with special counsel Robert Mueller’s investigation into Russian election interference.

For comparison, when Bill Clinton addressed the public after his Senate acquittal in 1999, having been impeached for lying to Congress about his affair with White House intern Monica Lewinsky, he began by expressing how “profoundly sorry” he was for actions.

By contrast, Trump lit into his chief accusers – the Democratic House speaker, Nancy Pelosi, and the chief prosecutor of the case against the president at trial, the California congressman Adam Schiff.

“The corrupt Adam Schiff. He should have gone into script writing, unfortunately he went into politics,” said Trump, to laughter from the partisan audience.

Then he added: “Nancy Pelosi is a horrible person.”

He railed once again against what he called the “fake” dossier of intelligence gathered by former British MI6 officer Christopher Steele and presented to the FBI in 2017, which alleged secret contacts between the Trump 2016 election campaign and Moscow – and that Russian intelligence had personally compromising material on Trump.

“Hillary Clinton and the Democratic National Committee paid millions to get this fake dossier,” he said on Thursday.

The president also returned to the subject of the former FBI director James Comey, who was fired by Trump nearly three years ago.

“Had I not fired James Comey, who was a disaster by the way, it’s possible I wouldn’t even be standing here right now,” Trump said.

Trump referred to Comey as a “sleazebag” and attacked “the top scum” at the FBI, referring to the bureau’s top leadership, for the investigations into his conduct.

And Trump offered a play-by-play account of the 2017 shooting at a congressional baseball practice, near Washington, that severely injured Republican congressman Steve Scalise, with the president using hand motions to imitate gunfire.

“Everyone ran into the dugout,” he said, then, referring to law enforcement who took down the gunman: “These two people came charging forward, boom, boom, boom.”

Trump said Scalise had probably “set a record for blood loss” and complimented the congressman that he was “better-looking now”.