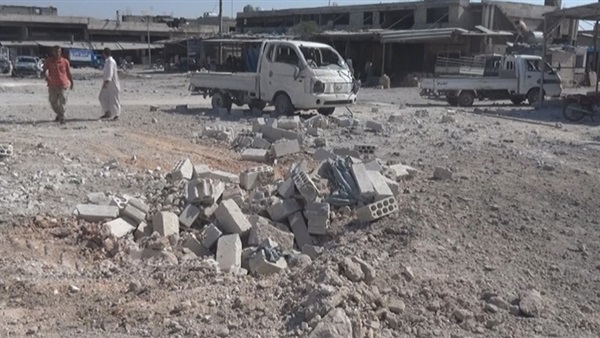 The battle for Saraqib city and its surrounding highways has already triggered an exodus of civilians, and is key to the fate of the Syrian opposition as it clings onto its remaining territory in northwest Syria. The battle for the city also raises the prospect of a face-off between Turkey and Russia, who support opposing sides in the conflict.

“With every iteration of the war and battle lines drawn and redrawn … Idlib has continuously and increasingly appeared the last battle ground for the resistance’s last stand against the regime,” said Jessica Leyland, Senior Intelligence Analyst at AKE International.

Russia and Turkey, who have signed various agreements during the Syrian war, are being pushed into a position of conflict as Syrian airstrikes supported by Russia have killed Turkish troops sent by Ankara to support the opposition.

The Syrian war, which started with the regime’s deadly oppression of anti-government protests, has killed more than 380,000 people and displaced more than half the country’s population.

On Sunday night, eight Turkish troops were killed in strikes by the Russian-backed Syrian regime, whose forces had surrounded several Turkish observation posts in the area around Saraqib.

The strikes came after Turkey sent three convoys of over 400 military vehicles into Syria and set up three new observation posts around Saraqib to support opposition groups there, following major advances by regime forces and their Russian allies to take the strategic city.

In retaliation for the killing of its soldiers, Turkish jets entered Syrian airspace and killed more than 13 regime troops in Hama, Latakia and Idlib, according to a war monitor.

Turkish and Syrian regime forces also exchanged fire around Saraqib, according to the British-based Syrian Observatory for Human Rights, while the government forces bombed the so-called “demilitarization zone” in Idlib.

“These latest clashes are extremely significant. It can be seen that these battles pushing into Idlib and western Aleppo province were on the horizon in September 2018 – or even before – when the demilitarization zone agreement was struck,” said Leyland.

Russian President Vladimir Putin said Syrian regime forces attacked Turkish troops because Ankara had not informed Moscow of its latest moves in Idlib. Ankara denied the claim, saying it had informed the Kremlin.

Why is Saraqib important?

Saraqib is a city in the southeast of the Idlib region covering an area of 170 square kilometers. Its residents revolted against the Syrian regime and the city changed hands many times between the Syrian regime, the opposition Free Syrian Army and other opposition factions and extremist groups.

The map below shows Saraqib’s location and its connections to Syria’s major cities, all of which are now under Syrian regime control.

Before the 2011 revolution, the M5 highway was a major trade route that connected Turkey to the commercial hub of Aleppo to the capital Damascus and finally to Lebanon and Jordan.

The M4 leads to Latakia, which houses the Hmeimim Russian airbase, and therefore securing it is vital for the Syrian regime, which relies on Russian air power.

Turkey has been a key player in the Syrian war through its support for opposition groups and its establishment of a “safe zone” in the north of the country, where it says it will return the Syrian refugees who fled to its territory.

In Idlib, Turkey supports opposition groups including factions that fall under the Free Syrian Army.

Turkish forces have established three observation posts in less than a week around the city of Saraqib. Turkish observation posts, set up under a 2017 agreement with Russia and Iran, are meant to monitor violations of a ceasefire agreement that has been broken more often than kept.

Turkey sent the biggest military reinforcements yet to Syria in recent days, according to the Syrian Observatory for Human Rights. The war monitor’s reports said the convoys included tanks, armored vehicles, troop carriers and military equipment.

However, former Syrian diplomat Bassam Barabandi told Al Arabiya English that “three of the Turkish observation posts are surrounded by the regime forces. In other words, even if Turkey sends reinforcements and observation forces near Saraqib, in theory, that doesn’t stop the regime from crossing the observation point and going through with it.”

Turkish President Recep Tayyip Erdogan has been keen to avoid a fresh wave of Syrian refugees arriving in Turkey. On Monday, Erdogan said that one million people were already fleeing the clashes toward the Turkish border.

Is this the end of Syrian opposition strongholds?

The battle for Saraqib could be the beginning of the final showdown for Syria as it would open the way for regime forces to advance on Idlib city.

The Idlib region is home to around three million people, half of whom were evacuated by regime forces from other parts of the country after they besieged cities controlled by the opposition and bombarded them with airstrikes.

“It’s common knowledge that the regime wanted to gather the armed opposition in one place and finish them off altogether. There wasn’t a directive, but it was common knowledge for us,” an officer in the Syrian regime forces told Al Arabiya English on condition of anonymity.

“What’s going on in Saraqib reflects the dynamics of the relationship between the powers involved. Today we are reaching the final stages between these countries, and the Syrians are paying the price,” Barabandi said.