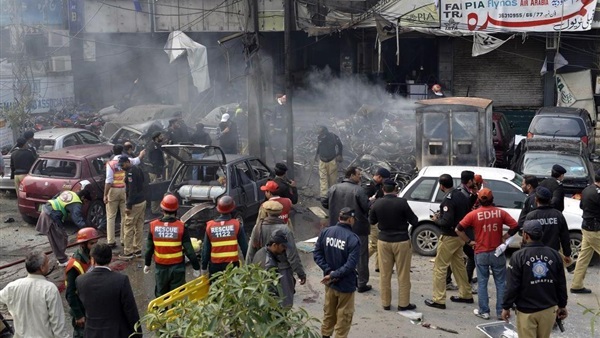 Sherif Abdel-Zaher
طباعة
Terrorist organizations are still capable of launching deadly attacks in south Asia.
South Asian states, especially Pakistan, are turning into hotspots for this terrorist activity.
On December 7, a man was killed and five others injured in an explosion that hit Lahore, the capital of the Pakistani province of Punjab.
Serious attack
According to Pakistani police, terrorists riding a motorcycle opened their gunfire on a car, killing all three people inside it.
The Pakistan army intensified, meanwhile, operations against militants in areas close to the border with neighboring Afghanistan. The operations are leading to a considerable improvement of security conditions in these areas.
Lahore is an important trading and cultural center. It is also a stronghold of the ruling Pakistan Muslim League.
Terrorist attacks have lead to a huge loss of life in Pakistan. A large number of terrorist organizations are active in the south Asian country, including the Taliban and the Islamic State of Iraq and Syria. Attacks by these organizations are negatively affecting economic and political conditions in the country.
Report
The Takfiri edicts observatory of al-Azhar has surveyed terrorist attacks in Afghanistan, Mali, the Democratic Republic of Congo, Syria, Pakistan, Russia, Indonesia and Iraq between November 9 and 15.
It said in a report that 13 terrorist attacks took place in these countries in this period.
The attacks were staged by more than one terrorist group and claimed the lives of 69 people, the observatory said.
It added that 77 people were also injured in the same attacks.
Conflicts
Islamist affairs specialist, Hesham al-Najjar, said Pakistan has been the scene of a large number of conflicts over the past few years.
"Terrorist groups use these conflicts to step up their activities," al-Najjar told The Reference.
He referred to the importance of Pakistan's strategic location. Al-Najjar added that this south Asian country also has strong ties with Europe.

Mobilizing students: Mullahs’ arms recruit children inside and outside Iran