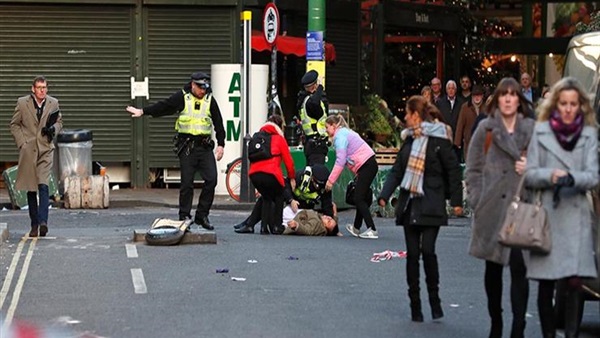 The London Bridge terrorist was pictured laughing in a brochure from his rehabilitation group that he attacked, after writing them a poem of thanks when they gave him a laptop.

Usman Khan was described as a success story after he worked with Learning Together, a Cambridge University programme that assisted him while in prison and after his release.

Khan even wrote organisers a thank-you note after they provided him with a computer he could use without breaching his licence, as reported by The Daily Telegraph.

Meanwhile, his thank-you letter to staff claimed that the Learning Together programme had a 'special place in [his] heart'.

It emerged yesterday that he used to walk around school with a picture of Osama Bin Laden attached to the front of an exercise book.

Khan was also spotted laughing at videos of the 9/11 terror attacks in New York with other religious fanatics in a cafe when he was just 14.

In the same year, he started preaching Islamic extremism on the streets of Stoke on behalf of Anjem Choudary’s banned terror group al-Muhajiroun.

Khan, who called himself Abu Saif, was photographed waving an Al Qaeda flag as he ranted into a megaphone.

The British-born son of Pakistani immigrants from the Kashmir region, he had three elder siblings – two brothers and a sister.

Despite the hard-working ethos of his taxi-driving father Taj Kahn and his mother Parveen Begum, he left Haywood High School in Burslem, Stoke-on-Trent, with few qualifications.

His weekly distribution of disturbing literature resulted in his family’s modest three-bedroom terrace home in the Cobridge area of Stoke being raided by anti-terror police when he was just 17.

Shortly after the raid, an indignant Khan said: ‘I’ve been born and bred in England, in Stoke-on-Trent, in Cobridge, and all the community knows me and they will know... I ain’t no terrorist.’

The teenager was investigated for promoting extremist views and radicalising vulnerable people.

But after a 20-month probe, the Crown Prosecution Service told officers they were unlikely to get a conviction with the evidence they had. Instead of acting as a warning, the lack of criminal charges against Khan simply emboldened him.

He vowed: ‘We are going to carry on until the last breath, because we believe this is the truth.’

The extremist was true to his word. He spoke at a conference about why Britain should adopt Sharia law and began a campaign to stage a highly inflammatory march through the town of Wootton Bassett in Wiltshire, where British soldiers who died in Iraq and Afghanistan were honoured.

Although the protest never took place, his membership of Islam4UK – another of Choudary’s banned extremist groups – prompted the security services to launch a second covert surveillance operation on him in 2010.

Bugs installed by MI5 in Khan’s home recorded him discussing how to make a pipe bomb after seeing a ‘recipe’ in an Al Qaeda magazine. He also called non-Muslims ‘dogs’, discussed buying weapons and spoke about attacking pubs and clubs in the Stoke area by leaving explosives in the lavatories.

Khan and two others, who called themselves the ‘Stoke Three’, contacted radicals in London and Cardiff on Paltalk, an internet messaging service.

The men, dubbed the ‘nine lions’, met at a Victorian boating lake in Wales to discuss how to train home-grown terrorists, embark on letter-bomb campaigns, blow up pubs and use a pipe bomb to kill and maim people at the London Stock Exchange.

Khan and others from his hometown became obsessed with the idea of setting up a terrorist training facility under the guise of creating a school on land owned by his family in Kashmir.

While the rest of the cell wanted to begin attacks immediately, the authorities were much more concerned about the sophistication displayed by the ‘Stoke Three’.

During the subsequent trial, judge Mr Justice Wilkie found they were pursuing a ‘long-term and sustained path [to become] more serious and effective terrorists’.

After his arrest, Khan was the first to plead guilty to planning a terror camp, knowing he would get a reduction in sentence.

In 2012, he was imprisoned for public protection for 16 years but could only be considered for release if a parole board was convinced he posed no threat.

Mr Justice Wilkie singled Khan out from the other extremists on trial because he was clearly a devious and scheming man dedicated to his hateful ideology.

He wrote that Khan’s ‘ability to act on a strategic level’ and to cleverly plan for future terror attacks meant he should be released only if and when a parole board was convinced he no longer posed a threat.

But as soon as he was behind bars, Khan wrote a letter from his cell in Belmarsh prison in southeast London asking to take part in a de-radicalisation course.

‘I would like to do such a course so I can prove to the authorities, my family and soicity [sic] in general that I don’t carry the views I had before my arrest and also I can prove that at the time I was immature, and now I am much more mature and want to live my life as a good Muslim and also a good citizen of Britain,’ he wrote.

The following year, three Appeal Court judges, led by Sir Brian Leveson, concluded it was wrong for Mr Justice Wilkie to have handed Khan and his Stoke gang members tougher sentences than their London counterparts.

Sir Brian gave Khan a determinate 16-year jail term instead, meaning he would be automatically released after eight years.

There was no assessment by the Parole Board before he left Whitemoor prison in Cambridgeshire in December last year. Under the terms of his licence he was required to wear an electronic tag, and was assigned a specialist anti-extremist parole officer, whom he met twice weekly.

He was ordered to live in Staitheford House bail hostel in Stafford. But months later he was able to move into a £430-a-month bedsit in a down-at-heel three storey-house nearby.

Khan joined Learning Together, a programme run by Cambridge University’s Institute of Criminology that seeks to rehabilitate prisoners with workshops on story telling.

The course worked with Khan while he was in prison and after his release.

He even wrote a poem and thank you note to the organisers after they provided him with a computer, as reported by The Telegraph.

But just months later Khan used that connection to get permission to travel to London, where he killed two people.

It is understood Mr Merritt, who was a coordinator for the course, worked with Khan while he was in prison.

Such was his apparent turnaround, the prestigious university encouraged Khan to apply for a place as an undergraduate student.

And in an astonishing report called Learning Together by staff at Whitemoor prison, Khan’s apparent rehabilitation was used as a case study promoting its work.

Alongside a picture of the terrorist, it said: ‘We have equipped Usman with a [laptop] so that he can continue his studies and his writing, which he started in Whitemoor.’

Earlier this year, Khan attended a Whitehall event under police escort. He appeared eager and willing to engage with the Government’s Prevent and Desistance and Disengagement programmes, intended to de-radicalise extremists.

The fanatic was also invited to attend the Cambridge University criminal justice seminar near London Bridge on Friday.

He was given special dispensation to travel to London because the terms of Khan’s early release from jail meant he was not allowed to travel beyond a certain distance from his home in Stafford.

This time he was without an escort – allowing him to fatally stab two people and wound three others before being shot dead by police at the age of 28 as he lay on the bridge wearing a fake suicide vest.

Khan is thought to have travelled by train to London Euston station from Stafford railway station on Friday morning. Police retrieved the CCTV from the station within hours of the attack. Detectives have also visited the supermarkets close to his home amid concerns he bought the knives he used during the attack from one of them.