Between Moderation and Extremism: The Strange Evolution of Hungarian Far-Right 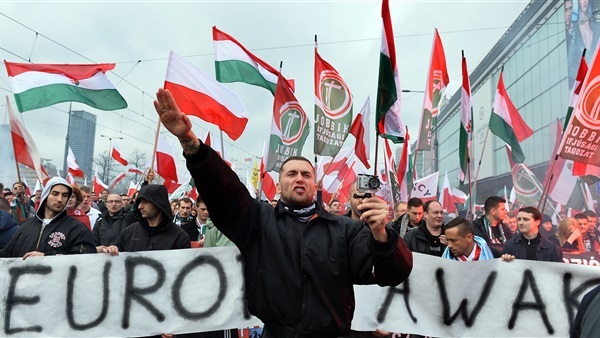 The Hungarian far-Right has recently came into the spotlight again after the ultranationalist group, Legio Hungaria, vandalized a Jewish community center in Budapest. The assault happened at the end of October during a nationalist march in the center of the capital to commemorate the 1956 uprising against Soviet occupation. Although the attack was horrendous, no one was injured. Instead, neo-Nazis plastered the building with stickers and burned a rainbow flag at the entrance. 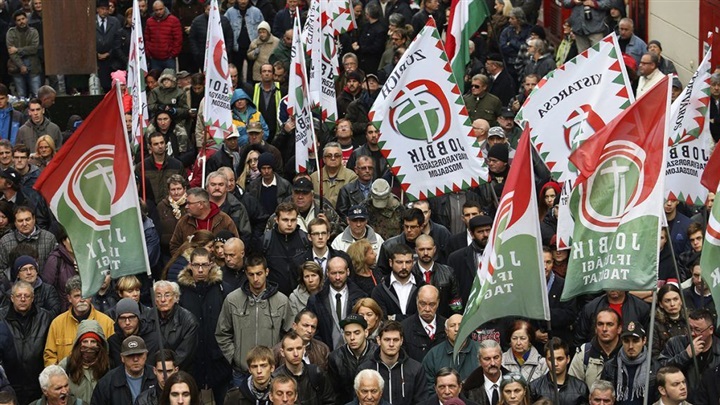 The attack was not the first far-Right attack in the country and Legio Hungaria is not the only extreme right organization. Also, attacks are not reserved only for Jews. In fact, the attack on the Aurora Jewish community center had more to do with its financial backing from George Soros’ Open Society Foundation and also its support for the LGBTQ movement, immigrants and Roma minorities. Also, the date of the attack was not accidental. Jews played a significant role in the Communist regime of Hungary shortly after World War II. Before this, the majority of Jews were killed or fled from persecution during the Nazi takeover of Hungary. Far-right adherents dismiss these purges as “Jewish conspiracy theories”. These conspiracy theories have also found a place in modern discourse as the far-Right believes Soros is behind a plot to bring migrants into Europe. In their narrative, this is part of a Jewish goal to destroy and control Europe.

In general, the Hungarian far-Right can be categorized as anti-liberal, anti-Western, anti-globalist, anti-Semitic, homophobic and xenophobic. It is not a new phenomenon. Since the 1990s, the far-Right has comprised of 10-15% of voters. The Hungarian Party of Justice and Life (MIEP) is a contemporary nationalist movement which started in 1993. It supports the idea of a greater Hungary, including areas inhibited by Hungarians in Slovakia, Romania, Ukraine, Serbia and Croatia This grievance dates back to the 1920 Treaty of Trianon which reduced Hungarian land by two-thirds leaving a quarter of the Hungarian population outside of the country’s borders. Far-right groups, therefore, are vocal supporters of Hungarian minorities in other countries.

The biggest far-right party in Hungary is Jobbik, which is vehemently against mass migration but isn’t necessarily anti-Muslim unlike many other far-right groups in Europe. Interestingly enough, Gabor Vona, a former leader of Jobbik, considers Islam as the last resistance against globalization and liberalism. He even called for renewing the Turkey-Hungarian friendship in order to build a strong alternative against the West. The Jobbik party was established in 2003 but entered wider politics in 2006 calling for radical protests against “corrupt” post-communist leaders. They advocate against communism and also against the Roma minority.

Prime Minister and Right-wing leader Fidesz Victor Orban was trying to integrate gypsies and the Roma group were the main beneficiaries of the government’s policy toward minorities. The government condemned violence against Roma and was increasing police forces in areas were anti-Roma riots were occurring. In response, Jobbik organized a paramilitary group called the Hungarian Guards which attacked Romas. Thousands of people joined the group. However, the group was dissolved in a 2008 court order and participation in it became illegal.

Shortly after, however, a group called the New Guards was established and in 2010, Vona, who became a politician in the government, was seen wearing the Guards’ uniform at a parliamentary inauguration. It wasn’t until 2011 when all uniformed civic patrols became illegal and inciting public sentiment through fear mongering was penalized with up to two years in prison. This, however, wasn’t enough to completely get rid of the patrols.

Since a few years back, Jobbik has repositioned itself as a conservative Christian party which rejects radical right-wing ideology. This move towards the center is not merely a cosmetic makeover but seems to be a real shift, mainly because the most radical members of the group left the party in 2018 after losing in internal elections. The change in the party’s line was noticed by other actors.

In 2011, Jewish organizations were calling on the government to ban Jobbik for its anti-Semitic platform, but in 2019 some Jews considered to cooperate with the party, including members of Mazsihisz, an affiliate of the World Jewish Congress. Since 2015, Jobbik’s leaders began to change their views on Jews and Israel. Vona even sent the Jewish community Hannukah greetings that year. In 2016, Jobbik abandoned its anti-Israeli policy. So, to some extent the newfound openness to cooperation is because the party has, itself, changed.

However, the political landscape should not be ignored. In an attempt to challenge Orban’s grip on power, left and liberal organizations are looking to enlarge the opposition. However, some political analysts believe the change is only superficial. As Dr. Dominik Hejj writes: “Without a doubt, the change in its communication strategy is to help the party open up to new social groups. Yet, these new slogans do not mean a new political platform. The one that was formulated in 2014 is still binding.”

The current leader of Jobbik is Tamas Sneider, accused of being former skinhead who confessed to beating a Roma person in 1992 with metal cables. However, strangely enough, Sneider is seen as the person ensuring that Jobbik will not go further to the right as was the case of his former rival Laszlo Toroczkai.

The internal changes Jobbik is experiencing, however, does not mean that the extreme right has disappeared for the political scene. The vacuum is being filled by other organizations, and a lot of them are connected to the key person in the extreme right movement, Laszlo Toroczkai. He was a member of one of the first post-Cold War far-right parties in Hungary, MIEP.

In 1998, Toroczkai became a member of parliament representing MIEP.  Three years later he left the party and established Sixty-Four Counties Youth Movement HVIM, that aimed to unify all Hungarians living abroad and to revise the Treaty of Trianon. The number 64 stands for the number of all Hungarian counties before the treaty, so it recalls the idea of the Greater Hungary. Due to revisionist ideology Toroczkai was banned in certain periods from entering Romania, Serbia and Slovakia.

HVIM organized events, festivals for Hungarian minorities in neighboring countries. Although these nationalist events were non-violent and attracted families, HVIM itself was not free from violence. In 2011, Hungarian members of HVIM in Serbia assaulted five Serbian-speaking men beating them with metal rods. In 2015, members of HVIM were arrested in Romania for attempting to detonate an IED and were sentenced to five years in prison. 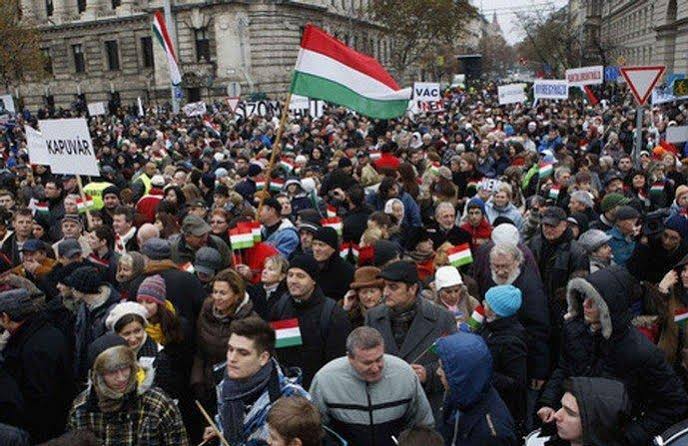 In 2013, Toroczkai left HVIM when he became mayor of Ásotthalom, a village where he banned Muslim clothes, calls to prayer and gay propaganda. In 2016, he became vice president of Jobbik. However, when he competed for a leading position in the party with Sneider in 2018, but lost. Due to the defeat, in the same year, he established a new party called Our Homeland Movement. Soon, the new movement was joined by other Jobbik politicians disillusioned with the less radical course of the party. He proclaimed at the establishment of the movement that its aims are for a “White Hungary”, against Roma minorities and against Jews and Israel, as he perceives Israel as a destabilizing force in the Middle East and North Africa.

He then created a paramilitary force called the National Guard, following the spirit of Jobbik’s Hungarian Guard, where military training was given. He said Hungarians must be equipped to defend themselves from “gypsy terrorists” and he blasted other political parties for their “political correctness”. “We are here because the state failed to protect us,” Toroczkai said.

Many in the Roma community fear the return of militias to Hungarian streets recalling the wave of brutal and racially-motivated attacks that occurred in the previous decade. The attacks came from the Hungarian Guards, but also other groups like the now-defunct Death Squad established in Debrecen. Four extremists from the group killed six Romas in 2008. The group was subsequently banned and the perpetrators are now serving life terms in prison.

Before the establishment of Our Homeland Movement, other right-wing groups were eager to fill in the void left by Jobbik and joined forces to create a group called Force and Determination in 2017. One of the biggest groups within the Force and Determination group was the Army of Outlaws which was established in 2008 by Toroczkai. Its current leader, Zsolt Tyirityán, earlier served a prison sentence for a vicious attack on a Roma citizen.  Tyirityán was also member of Pax Hungarica Movement (abolished in 2017) that evolved from the Hungarian Blood and Honor organization. Army of Outlaws itself has a long history of violence against the Roma minority, and, like the Hungarian Guards,  advertised itself as “helping” with problems with gypsies.

While far-right organizations act separately, they come together to commemorate 1956 in Budapest. At a gathering in 2018, more than 1,000 members of various right-wing groups attended.

This brings up the question of Jobbik’s recent turn towards moderation. A video leaked in 2019 from Sneider’s wedding showed him talking about protecting Hungary from gypsies while his wife gave a Nazi salute. There is also information of cooperation between Jobbik and Army of Outlaws. In a leaked 2015 recording, Sneider, was heard explaining the limitations of his party while acknowledging the need for organizations like HVIM and Army of Outlaws.

Legio Hungaria, responsible for recent anti-Semitic attack, is a new organization that separated from HVIM because it wants closer ties with Our Homeland Movement.  Legio Hungaria is white-supremacist, anti-Semitic organization which aims to “defend White Europe”. It has organized “The Conference of Racial Defenders” where it invited Zsolt Tyirityán from Army of Outlaws.

In conclusion, the main driver behind the growth of the extreme right was the idea of a Greater Hungary and the unification of the nation, hostility towards the Roma minority, modern anti-Semitism, and suspicion of the West. It seems that in recent years, in the wake of the migration crisis, a new rationale is being adopted by some extreme right organizations.