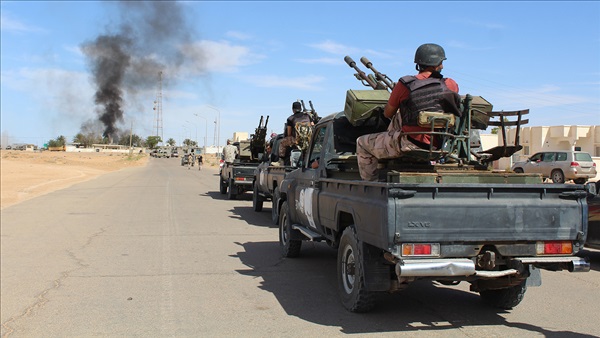 The Libyan National Army (LNA) led by Khalifa Haftar said it has carried out airstrikes on the port city of Misrata, targeting armored vehicles delivered from Turkey and a munitions depot.

The LNA said its strike in Misrata, 200 kilometers east of the capital Tripoli, targeted 19 armored vehicles delivered from Turkey to forces loyal to the Government of National Accord (GNA) headed by Fayez al-Sarraj.

The forces had arrived in the port on Monday, along with weapons and munitions.

The vehicles, which were stored in an industrial area in the city center, were struck in high precision attacks, resulting in consecutive blasts, the LNA said.

The National Army leadership reiterated its warning to Turkey against providing military assistance to “terrorist militias,” and called for steering Misrata clear of military confrontations to preserve the safety of it citizens and its ports.

“The use of civilian ships and planes to transport and store military equipment in the city’s ports are in contravention of international law and international humanitarian law,” the LNA said in a statement.

GNA’s health ministry denied that the Army’s attacks caused casualties, but the Misrata medical clinic said that 13 wounded individuals, including civilians, were treated at the facility following the airstrikes.

The clinic’s head of emergency unit said they had minor injuries.

Residents said the strikes there were unusually powerful and followed by repeated explosions. Pictures posted on social media showed a large ball of fire over surrounding houses.

Despite the LNA’s announcement of the attack, Turkey’s foreign ministry said it had no information on the matter.

“We see the establishment of a lasting ceasefire in Libya and the continuation of efforts for a political resolution under the UN’s auspices as a topic of priority,” he said.

Meanwhile, the death toll from an airstrike on a biscuit factory in southern Tripoli has risen to 10.

Another 35 were wounded when the factory in Wadi Rabi took a direct hit on Sunday.