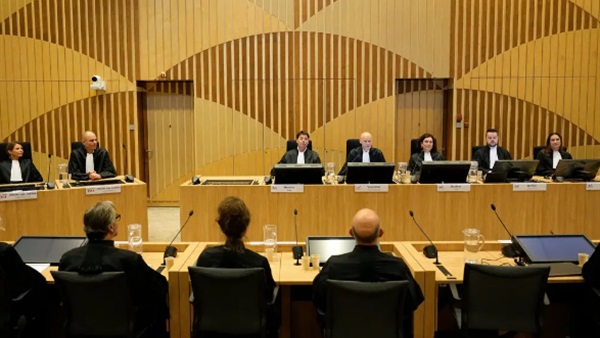 A Dutch court on Thursday convicted three men with ties to the Russian security services and sentenced them to life in prison over the downing of a passenger jet above eastern Ukraine in July 2014, during a Moscow-backed separatist uprising that foreshadowed Russia’s full-scale invasion of the country.

The court found that an antiaircraft missile system provided to separatist forces by the Russian military brought down Malaysia Airlines Flight 17, commonly known as MH17, on its way from Amsterdam to Kuala Lumpur, killing all 298 people aboard.

The crash was by far the biggest loss of civilian life in the conflict  up to that time, eliciting global outrage. Some of the victims’ families have suggested that the West’s failure to punish Moscow back then is in part responsible for the invasion of Ukraine and the Russian war crimes that have become a part of everyday life in the country today.

“I’ve always said that our family members were the first non-Ukrainian people that were the victims of a war that started eight years ago,” said Piet Ploeg, the chairman of the MH17 Flight Disaster Foundation, representing most family members of the crash victims.

And the fact that the convictions came only after eight years of painstaking investigation and judicial proceedings marked by Moscow’s stonewalling highlights the formidable challenges that prosecutors will face again as they try to hold more recent Russian war criminals accountable.

Thursday’s verdict offered a bare measure of justice for the victims’ relatives, as the three men convicted are believed to be living in Russia or Russian-controlled territory in Ukraine, where they are unlikely to be apprehended.

But the judges did clearly highlight the Kremlin’s role in the crash — it armed separatists in eastern Ukraine and instigated their uprising — and emphasized Russia’s responsibility for the tragedy against the backdrop of the current war.

A fourth defendant, Oleg Pulatov, also a former Russian military intelligence officer, was acquitted because he was considered insufficiently involved in the episode.

Ukraine’s president, Volodymyr Zelensky, praised the “important court decision,” but in a message posted on Twitter said that the masterminds behind the attack must also face trial, “as the feeling of impunity leads to new crimes.”

Explosion in Poland: A Ukrainian air-defense missile — not a Russian weapon — most likely caused a deadly explosion in a Polish village, a top NATO official and Poland’s president said, easing fears that the military alliance would become more deeply embroiled in the war.

Retaking Kherson: On Nov. 11, Ukrainian soldiers swept into the southern city of Kherson, seizing a major prize from the retreating Russian army and dealing a bitter blow to President Vladimir V. Putin. Days after the liberation, evidence and accounts of torture are emerging.

Infrastructure Attacks: In a relentless and intensifying barrage of missiles, Moscow is destroying Ukraine’s critical infrastructure, depriving millions of heat, light and clean water. For Ukraine, keeping the lights on as winter looms has become one of its biggest battles.

During the trial, prosecutors presented extensive evidence against the defendants and took the unusual step of publishing some of it online. They relied on a Dutch-led international investigation that gathered missile fragments, cellphone intercepts and witness accounts to establish that the Buk surface-to-air missile system used to shoot down the plane was trucked in from Russia at the request of the separatists and returned the same night.

On Thursday, the court said there was “very convincing evidence” that the Buk missile had been deliberately fired from an agricultural field near Pervomaiskyi, a city in eastern Ukraine. Even if separatist forces had intended to shoot down a Ukrainian military aircraft and not an airliner, the court said, the strike was nevertheless premeditated and constituted a crime.

The prosecution also produced recordings of conversations on July 16 and 17, 2014, in which the suspects allegedly discussed the need for a Buk and determined the location to launch it. The conversations captured the suspects’ initial enthusiasm over the strike and how that changed when they realized that they had shot down a passenger flight.

The downing of MH17 occurred against a backdrop of vicious fighting between the separatists and the Ukrainian military after an uprising that deposed the country’s Russian-aligned president in February. Ukrainian warplanes had been operating in the area.

The crash scattered bodies and wreckage across fields of wheat and sunflowers, in scenes both harrowing and poignant. Many of the victims were still belted into their seats, and here and there lay a picture book or toy belonging to some among the 98 children on board. Most of the victims were Dutch, but the flight also carried passengers from Australia, Britain, Malaysia and several other countries.

Despite mounting evidence of Russia’s culpability, efforts to hold the Kremlin accountable were met with a series of implausible counter-explanations and conspiracy theories that focused largely on blaming Ukraine and attacking the legitimacy of the investigation. Among those was an assertion that the C.I.A. had crashed a planeload of bodies into eastern Ukraine to frame Moscow.

On Thursday, the court said that these alternative scenarios belonged to the “realm of fantasy,” and that evidence presented by Russia was repeatedly shown to be forged or false.

In a statement, Russia’s Foreign Ministry said on Thursday that the trial had been politically motivated, adding that it “has every chance of becoming one of the most scandalous in the history of legal proceedings with its extensive list of oddities, inconsistencies and dubious arguments of the prosecution.”

With Russia having vetoed an effort to form a United Nations tribunal for the case, the trial was held at a local criminal court on the outskirts of Amsterdam, in a high-security judicial complex right next to the sprawling Schiphol airport from which MH17 departed in 2014.

Coming out of the courthouse shortly after the verdict, Paul Guard, a 44-year-old Australian who lost his parents, Jill and Roger, in the crash thanked prosecutors and the court for what he described as “a very meticulous investigation.”

As for many of the bereaved, Russia’s invasion of Ukraine this year looms large for Mr. Guard. The war, he said, brought back difficult memories and a sense that the crash was among the first of many unspeakable tragedies in a now eight-year conflict.

“It breaks my heart,” Mr. Guard said. “Every day the war keeps going on, there are more people, innocent people that are no less innocent than my parents, who are just trying to live their lives, who are being killed.”

The day before the verdict, Mr. Guard and his daughter went to a memorial for the MH17 victims in a park a few miles from the courthouse. There, 298 trees, one for each of the dead, have been planted in a ribbon-shaped layout.

“So many trees there,” Mr. Guard said. “So many lives that were lost.”

Several family members said they hoped the verdict would also serve as a form of condemnation of the Russian invasion.

“Part of justice and part of accountability is the world holding the Russian Federation to account for the atrocity of MH17 and the continued atrocities for the invasion of Ukraine and the war crimes committed against thousands more people,” said Jon O’Brien, an Australian citizen who lost his son in the crash.

Whether the trial could set an example for possible prosecution of Russian war crimes is unclear, however.

Marieke de Hoon, assistant professor of international criminal law at the University of Amsterdam, said that the fact that the Dutch court had clearly concluded that “Russia had overall control” over the breakaway regions from mid-May 2014 onward — something that Russia denies — “is very important for legal proceedings by Ukraine and the Netherlands” against Russia in various international courts.

In July 2020, the Netherlands submitted a complaint against Russia at the European Court of Human Rights over its involvement in the crash. The European court is expected to rule on the admissibility of this complaint later this year.

Ms. de Hoon noted that new types of evidence used in the trial, including open-source information that helped show the movement of the Buk missile launcher through separatist-controlled territory, could emerge as critical tools for prosecutors in subsequent trials.

“Hopefully, this trial is just the start of something, because we have to prosecute all of those war crimes,” Mr. Guard said. “And there are many, many, many more war crimes than what we’ve seen with MH17.”