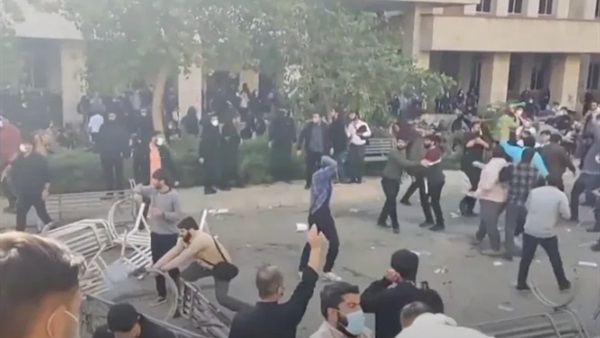 A swarm of black-clad Iranian security forces on motorcycles, a crowd of screaming students ducking for cover and, as shots ring out, two campus security guards helplessly waving their arms to shield the protesting youth from gunfire.

All this was captured in a short video filmed in the city of Sanandaj last week, offering a glimpse of the terror of Iran’s crackdown on anti-government protests that have persisted for 50 days since the death of a young woman in the custody of Iran’s morality police.

That the video showed a rare moment of heroism, where Iranian officials – albeit minor campus security – apparently sided with the protesters, ensured that the clip went viral, with commentators praising it as an example of solidarity in the face of repression.

This view was borne out the next day when grateful students presented the two campus guards with flowers. “Thanks to the security of our university, who shielded us at the protests yesterday,” said a student posting in a Telegram group sharing photos of the smiling guards receiving their bouquets.

But what happened next illustrates the suspicion and paranoia permeating protest activism in Iran, where fear of Iran’s extensive intelligence networks is widespread: a chorus of comments asking whether these guards were among those who are believed to be informing on students and working to disrupt their protests.

“Which side is he on now?” a student asked of one of the guards who was suspected of being an informant.

“He was on the right side on this day, we don’t know what side he’ll be on tomorrow,” replied another.

The Telegraph spoke with several Sanandaj university students, including a leading protest organiser, to understand how protests are being organised and the lengths the Islamic republic is going to end them.

The determination of protesters sees little room for compromise with an Islamic republic determined to quash dissent, suggesting a return to calm will be difficult, some observers say.

Occupying a fertile valley in the Zagros Mountains in western Iran, Sanandaj is just the 23rd-largest city in Iran, with fewer than half-a-million mostly ethnic Kurdish inhabitants. But the provincial capital is a centre of Kurdish culture in Iran.

That gives an additional dimension to protests there and in other parts of the country where Iran’s ethnic minorities predominate. While authorities fear the direct challenge posed to the Islamic republic by protesters across the country, they especially worry about secessionist national movements gaining influence among Kurdish, Sunni Arab, and Baloch minorities. Those minorities in turn often complain of discrimination and neglect from Tehran.

Most of Sanandaj’s universities are clumped together on a compound at the southern end of the city and it is here that most of the protests have taken place. In the days after Mahsa Amini’s death in September, over 1,000 students gathered at a time to chant “women, life, freedom”, one of Sanandaj’s leading student protest organisers told The Telegraph.

But as the protests continued, security forces began violently dispersing marches with batons, tear gas and shotguns, and the chants became more provocative, the organiser said, asking to remain anonymous for fear of being targeted. Protest sizes dwindled but those still marching began chanting “death to the dictator”, an explicit call for the overthrow of Iran’s Supreme Leader Ali Khamenei.

One student shared photos of injuries that his classmates had sustained from shotgun pellets, while several complained that campus security had been co-opted by security forces to inform on students and disrupt protests. “We call them spies, they enter crowds of protesters wearing plain clothes, and try to threaten us with arrest so that we will be afraid and stop protesting,” a 22-year-old student at Sanandaj’s Kurdistan University said.

While the protests were sparked by the death of Amini, an ethnic Kurd who was detained for allegedly violating Iran’s strict public dress code, protesters in Sanandaj are motivated by a wider range of grievances.

“Our anger is not only over mandatory hijabs, we are more concerned with our economic situation, violence, the arrest and killing of our brothers and sisters in the street,” the 22-year-old student said, asking to remain anonymous. “If I took a job now I could at most expect to earn two million toman,” or about £40 a month.

He continued: “Our main goal is to have this government gone, we want a democratic election to be held, no more dictatorship.”

Since the US re-imposed sanctions on Iran in 2018, the country’s economy has imploded and the value of the rial has fallen tenfold. A hike in the cost of subsidised petrol sparked protests in 2019, while last year thousands of Iranians protested over widespread water shortages.

Fearful of protests spreading and warning of foreign plots to destabilise the country, Iranian authorities have cracked down hard. As protests enter their eighth week, rights groups say at least 277 people have been killed, including several dozen members of security forces.

Authorities point to the killing of security forces to argue that they are facing a violent uprising and have threatened to charge “rioters” with “war against God”, a capital offence. Mass arrests have seen 1,000 people charged so far, including dozens of students, who activists say now could face the death penalty.

Tehran has also throttled the internet in a bid to stop protesters organising online and sharing information with the outside word. “We’re facing a lot of difficulties accessing the internet, many things were blocked by the government. We mainly communicate through Telegram, using proxy services to connect,” the 22-year-old student said.

Despite torturously slow upload speeds, the videos that have been shared are having a significant impact on the protest movement, according to Roham Alvandi, an Iranian history specialist at the London School of Economics. “These kinds of images are chipping away at what little legitimacy the regime has left,” he said.

Tehran’s concern over the impact of social media is evident in the sophisticated manner it has blocked certain apps and throttled connection speeds in protest hotspots, he said. “It’s just impossible for the Islamic republic to control the narrative of what’s happening and it is absolutely devastating to them.

“I would predict a mass movement will emerge. We are 49 days into this uprising with no signs of stopping and I think it will continue to grow as new outrages emerge,” Mr Alvandi said. “Most people recognise that we’re not going to return to the status quo ante.”