How the West is preparing for Putin to go nuclear 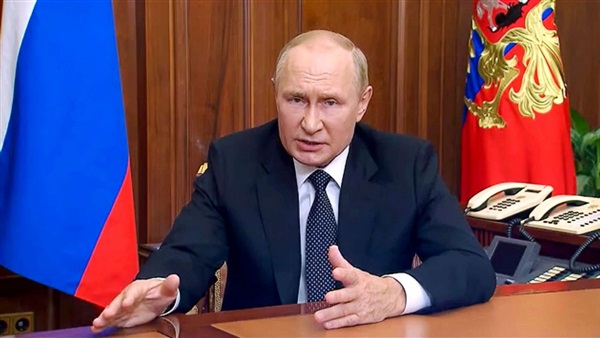 Western countries are making contingency plans to deal with chaos at home in case of nuclear war in Ukraine, officials said yesterday, as the threat of a battlefield strike by President Putin grew.

The measures could include issuing leaflets on how to survive a nuclear attack or ways to ease panic buying amid fears the fallout could reach western Europe and beyond. President Putin’s threats to use nuclear weapons in recent weeks have sent alarm bells ringing across Nato, with the alliance engaging in discussions behind closed doors as to how it will respond to such an eventuality.

Some observers now believe there is a realistic prospect of the Russian leader using a tactical nuclear weapon against Ukraine, either on land or firing it into the Black Sea. Asked if there were contingency plans in place to deal with the fallout of a strike in the West, such as a way or dealing with panic buying or distributing booklets on how to survive a nuclear attack, a western official said: “As you would expect the government is conducting prudent planning for a range of possible scenarios of which that is one.”

In the late 1970s and early 1980s, the British government, for example, issued the booklet Protect and Survive aimed at the public which described “how to make your home and your family as safe as possible under nuclear attack.”

The western official went on to condemn Putin’s “deeply irresponsible comments about nuclear use”. He said “any use of nuclear weapons would break a taboo that has held since 1945 and would lead to severe consequences for Russia as well as everybody else”. When it comes to the risk of nuclear war with Russia, there are at least two outcomes that strategists fear.

The first is that, pushed to desperation, President Putin attacks a major city — causing untold death and destruction. Once again, beneath the shadow of a large mushroom cloud, the world would be reminded of the horrors of nuclear weapons.

The second is that he doesn’t: that he attacks somewhere else, and it doesn’t seem so bad after all.

“The public tends to look at the use of nuclear weapons as a cinematic, extinction-level event,” says Stephen Herzog, senior researcher in nuclear arms control at ETH Zurich. “What, though, if we’re talking about the use of a small, tactical nuclear weapon over a forest or over Snake Island?” Then, it might feel different. Casualties could even be low.”

The question for Herzog and other researchers is, if that happened would the world — especially China and Russia — still unite to condemn it? Or would the nuclear taboo, the perilous global balance that has kept us safe for 70 years, be broken? It could put us, says Herzog, on an “escalation ladder”.

At few times since 1945 have we been closer to putting our foot on the first rung of that ladder.

In television addresses, Putin has pointedly cited the American use of atomic bombs at Hiroshima and Nagasaki as a precedent, and underlined that Russia would use “all available means” to defend its territory — which the Kremlin has now redefined to include annexed parts of Ukraine.

In Washington, President Biden warned that we are closer to nuclear conflict that at any time since the Cuban Missile Crisis. He is far from alone in that view. “Nuclear deterrence is running on fumes,” said Herzog, who has written an editorial in the journal Science calling for us to rethink the late 20th century’s ultimate defensive doctrine.

But although nuclear powers have always been cautious to guard their precise nuclear doctrines closely, in case the other side should read their hands, President Macron this week hinted that France would not use its independent deterrent against Russia if President Putin ordered atomic missile strikes on Ukraine or “the region”.

Among those who consider these problems analytically, there is a way of looking at nuclear conflict as a fixed low probability risk. In any one year, the chance of a major war is low. But roll the dice enough, over a long enough period, and it becomes inevitable.

In the journal Global Policy, Matthew Rendall, lecturer in politics and international relations at the University of Nottingham, has this month written a paper entitled: “Nuclear war as a predictable surprise”.

His argument is that we are complacent. The fact we survived the cold war did not mean there wasn’t a significant chance we might not have. The same is true now. “Probably we will get through this OK,” he says. “But the worry is, ‘probably’. If we start doing this sort of thing repeatedly, my fear is in the long run we’re not going to get lucky.”

Last week, Matthew Bunn, professor of the practice of energy, national security, and foreign policy at the Harvard Kennedy School, estimated that the risk of nuclear conflict in Ukraine was 10-20 per cent. The Swift Centre, a “superforecasting” company, put it at about 10 per cent.

The nuclear taboo has been a key mechanism for keeping us safe, says Rendall. “Nuclear weapons have become something you don’t really put on the table. You don’t think about using them. It’s like cannibalism. If you get hungry you don’t perform a cost benefit analysis. You don’t think, should I go out and catch somebody and eat him?”

If a nuclear weapon was used, “my hope would be that there would be this wave of horror, and that Russia would become persona non grata the way South Africa was under apartheid,” says Rendall. “But what if it doesn’t happen?”