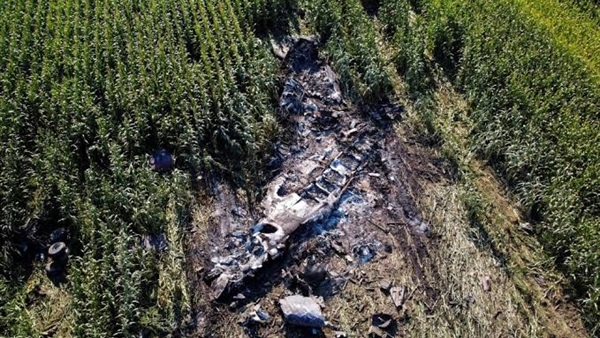 A cargo plane loaded with 12 tonnes of explosives crashed in northern Greece early on Sunday morning, sparking fears that it could be carrying chemical weapons.

All eight crew members on board the Antonov An-12 aircraft, operated by a Ukrainian airline, are believed to have died after one of the plane’s engines caught fire. The plane crash landed in a field in the rural region of Kavala, and exploded.

“We are still awaiting confirmation as to what type of ammunition the plane was carrying,” Filippos Anastasiadis, mayor of the local region, said. “We have advised all residents in the area to stay away from the crash area, stay indoors, keep their windows and air conditioning units shut for fear of toxic substances contaminating the region.”

Locals residents reported a “stinging, acrid smell” lingering across the region for hours after the plane crashed shortly before midnight as it was flying from the Serbian city of Nis to Bangladesh. It remains unclear whether the cargo of ammunition had been loaded from Ankara, in Turkey.

Serbia’s defence minister, Nebojsa Stefanovic, said the plane was carrying 11.5 tonnes of ammunition made in the country and the buyer was the Bangladeshi government.

Stefanovic said the cargo included illuminating mortar shells and training shells. He added that the plane’s cargo was owned by Serbian company Valir, a trade company registered to perform foreign trade activities of armament military equipment and other defence products.

Anastasiadis said rescue crews were barred from scrambling to the crash site in order to wait for special ordinance crews from the Greek military to determine the type of ammunition the Ukrainian plane was carrying.

Fire fighting officials said a set of drones had been mobilised on Sunday to scan and scour the site before ordinance crews moved in. Experts from Greece’s Atomic Energy Commission were also due to join them.

State TV ERT reported that the pilot, a Ukrainian national, had requested an emergency landing due to an engine problem and the “dangerous material” the aircraft was carrying.

Giorgos Archondolopoulos, who lives in the area, saw the fire as the plane descended through the sky.

“At first we thought it was a hot air balloon lighting, from some sort of celebration,” he said.

“But then were got scared, seeing it head towards us at very low altitude and turning into a fireball.”

“Once it crashed... explosions were ongoing for more than two hours. We were scared. We still are.”

The fire service cordoned off a radius of about 500 metres around the crash site and said it may have to be expanded.

A brigade official told reporters that firefighters “felt their lips burning,” while white dust was floating in the air across the debris of the crash.

“We don’t know what has been affecting us,” fire brigade coordinator Marios Apostolidis said.