Pregnant woman among 22 killed in Saratoga Hotel explosion in Cuba 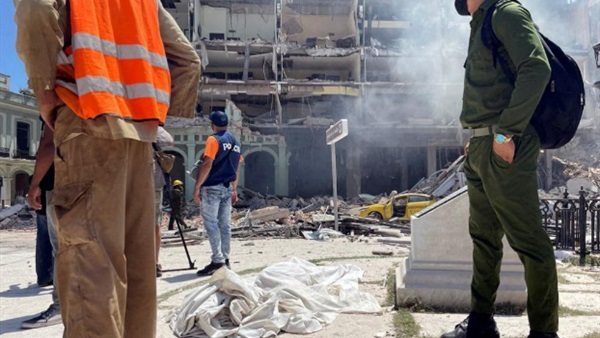 Twenty two people, including one child and a pregnant woman, were killed after an explosion suspected to have been caused by a gas leak destroyed a landmark hotel in the historic centre of Havana, Cuba.

The Saratoga Hotel, famous as one of the most luxurious places to stay in the city when it opened in the 1930s, was closed at the time of the blast. It had been due to open to tourists next week. The victims are understood to have been passers-by.

The powerful explosion ripped off most of the front façade of the building, exposing several bedrooms. Several adjacent buildings were also damaged and rubble was strewn across the street in front. Images posted on social media showed what appeared to be a body being hauled from the debris.

President Díaz-Canel went to the scene as firefighters and ambulance crew continued their search for survivors. “It was neither a bomb nor an attack, it was an unfortunate accident,” he said.

Dozens were injured, with official figures ranging between 50 and 65. Among the buildings damaged was a nearby school, but no pupils were hurt, according to the presidency.

Yazira de la Caridad, a mother of two, said the explosion shook her home a block from the hotel. “The whole building moved. I thought it was an earthquake,” she said.

The 96-room hotel fell into disrepair following the 1959 revolution which brought Fidel Castro to power. In 2005 work began to restore it to its former glory, which included installing a swimming pool and cocktail bar on its roof.

The disaster came just a day after Cuba hosted its annual tourism fair to promote the industry and attract international visitors. Business has been exceptionally slow to resume following the coronavirus pandemic.

One setback has been the loss of Russian tourists, who made up 40 per cent of all visitors last year, but are now largely unable to travel owing to flight restrictions imposed following the invasion of Ukraine.

The decline of tourism has exacerbated Cuba’s worst economic crisis in decades, which last year led thousands to take to the streets in the biggest anti-government protests since the revolution. More than 100 protesters were later jailed for sentences of up to 30 years.