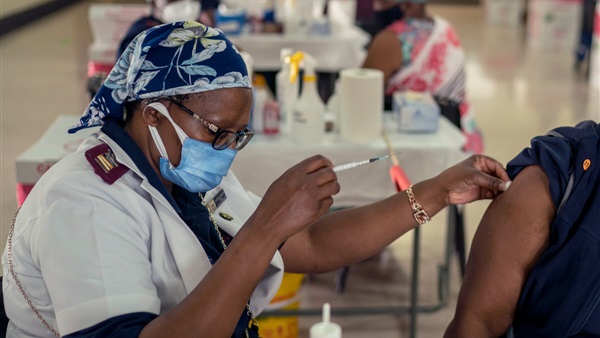 In recent days, more people have turned out to get their shots amid warnings from scientists and the World Health Organization about Omicron, which has driven a sharp increase in Covid-19 infections in the country’s most populous province of Gauteng, home to Johannesburg, over the past two weeks.

South African politicians have urged everyone who hasn’t been vaccinated to do so now. They say that despite some concerns that Omicron’s many mutations may make the shots less effective at preventing Covid-19, the vaccines should still provide protection against serious illness and death.

But for much of this year, South Africa’s vaccine rollout has struggled with a lack of doses, skepticism and, for several months until the most recent spike in infections, low case numbers that left many feeling as if the pandemic was over.

In the six days ended Saturday, 884,025 people were newly vaccinated, with more than half getting their first dose. That was up 41% compared with the previous week, but still far off the government’s target of 2.45 million weekly inoculations. Only about a quarter of South Africa’s population is fully vaccinated.

Among those coming for their first shot last week was Divine, a 27-year-old gas-station attendant, who was joined by several of his colleagues at a public vaccination site in northern Johannesburg.

“I’m here because I want to protect myself from the variant,” said Divine, who declined to give his last name. “I think I had Covid last year although I never tested. I just stayed at home and isolated. So today my colleagues…decided let’s just come now during lunch and take” the vaccine.

There was no line at the vaccination center, a contrast with testing sites across the city, where long lines started forming again this week.

South Africa reported 16,366 new Covid-19 infections on Saturday, up from just 116 on Nov. 8, the date of the first known case of Omicron in the country. Local scientists say the variant is now dominant in the country.

South Africa’s case load is still much lower than the number of per-capita cases reported in much of Europe and the U.S., but with nearly one in four tests coming back positive it is clear that many infections aren’t being recorded.

Tshepang Kolisa, a 22-year-old psychology student, got his second dose of the vaccine developed by BioNTech SE and Pfizer Inc. last week. Mr. Kolisa said he had to be inoculated because his university recently mandated Covid-19 vaccines for all students—a policy South Africa’s president has said the government is considering extending to other activities or locations.

“Especially after the new variant came out, I’m more encouraged to take [the vaccine] and I think a lot of people are,” said Mr. Kolisa.

In recent weeks, the South African government has asked both Pfizer and Johnson & Johnson, its other vaccine supplier, to delay shipments to avoid doses expiring amid low demand, health ministry officials have said. That is a big change from earlier in the year, when the country for months struggled to get any vaccines at all beyond a limited rollout of J&J shots to healthcare workers as part of an expanded clinical study.

The first shots became available to people over the age of 60 on May 20—months behind most Western nations—just as South Africa was moving into a record wave of Covid-19 infections propelled by the Delta variant. At the time, long lines formed at vaccination sites, as they did in July, when inoculations opened up for those over the age of 35.

In late July and August, the U.S. donated a total of 7.9 million doses of the Pfizer vaccine to South Africa as part of an effort to counter a severe shortage of Covid-19 vaccines across much of Africa. Only 7.3% of Africans are now fully vaccinated.

By the time South Africa finally had enough Covid-19 vaccines, the Delta wave of infections had subsided and daily case numbers dropped to their lowest level since the start of the pandemic. Most government restrictions on social and economic life dropped away, although masks are still required in all public spaces.

For many South Africans, a sense that the pandemic was over combined with distrust in vaccines, fanned by some prominent public figures and popular churches. Late last year, Mogoeng Mogoeng, who was then the chief justice of South Africa’s Constitutional Court, in a video shared widely on social media, prayed for the destruction of any vaccine he said was made by the devil.

“If there be any vaccine that is of the devil, meant to infuse 666 in the lives of people, meant to corrupt their DNA…any such vaccine, may it be destroyed by fire,” he said in the video.

Health activists and vaccination experts say the government hasn’t done enough to counter misinformation and convince South Africans that the vaccines are safe, especially in an environment where many distrust public officials following years of alleged corruption and poor government services.

“You’re asking communities to have faith in a public-health system that has continually failed them,” said Tian Johnson, lead strategist of civil-society group the African Alliance and a member of the committee that advises South Africa’s health ministry on Covid-19 vaccines.

Foster Mohale, a spokesman for the South African health ministry, said it was hard for the government to counter misinformation spreading on social media. “People are quick to blame government communications, but there are many factors, including…religious, cultural and anti-vaxxers…contributing [to] this low uptake of vaccines,” he said.