Inside the 'Guantanamo Bay for children' in Syria 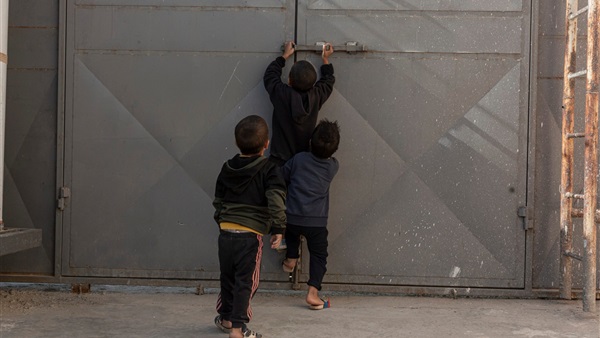 The walls of the daycare centre in this north-east Syrian prison are topped with barbed wire but adorned with paintings of SpongeBob SquarePants and Mickey Mouse.

Inside, children who are imprisoned with their Islamic State-linked mothers have a respite from the cells they spend their lives in. They can play with building blocks; sometimes making heart-shaped necklaces, other times fashioning guns.

Three young boys lift each other up at the metal gate to tug at the latch, eager to see something of the world beyond the prison. It is not clear how long they will remain here.

The UK Government is funding Syrian prisons holding hundreds of children of Islamic State members, the Telegraph can reveal, with some of those detained as young as two.

Britain has provided $20million (£15million) to improve the conditions in filthy, overcrowded jails in north-east Syria run by the Syrian Democratic Forces (SDF), the Kurdish-led militia that provided the ground forces to defeat IS on behalf of a global coalition.

The SDF was left holding about 70,000 prisoners at the end of the fighting in 2019. The vast majority are children, held in two large detention centres alongside their mothers.

But at least 700 children – and likely hundreds more – are detained indefinitely and without charge in prisons where conditions amount to “torture”, according to a UN special rapporteur. None have been prosecuted or found guilty of any crime.

Britain has said it will repatriate unaccompanied minors whose parents are UK citizens, but an estimated 60 remain in Syria.

“The fact that the UK Government is using taxpayer money to pay for kids to grow up behind barbed wire in overcrowded prisons is horrifying,” said Maya Foa, co-executive director of Reprieve, a legal NGO advocating for women and children detained in northeast Syria.

“The UK Government is effectively creating a Guantanamo for children in Syria.”

Nearly three years since the territorial defeat of IS there has not been a full accounting of the number of children linked to the group who are imprisoned in north-east Syria. Even now The Telegraph is only able to present a partial picture due to the difficulty of obtaining access to facilities holding minors.

Some of the jailed youths are described as having been child soldiers – so-called cubs of the caliphate – while others are merely considered to be of fighting age and therefore dangerous. Others are imprisoned alongside their mothers.

De facto authorities in north-east Syria view the issue of imprisoned children as highly sensitive from both a security perspective and as a potential public relations liability.

During a visit last month, the SDF denied The Telegraph’s request to report inside prisons holding children, with officials citing security risks and the fear of inspiring IS sleeper cells to attempt prison breaks. Instead, The Telegraph was shown a daycare centre for children living in prison with their mothers.

The newly opened Helat Centre has no deradicalisation curriculum but teaches children elementary lessons in English, Arabic and mathematics. Inside a walled courtyard adorned with murals of cartoon characters, toddlers and children played with plastic toys.

In the afternoon, the children returned to the prison with their mothers, who had been sent from al-Hol and Roj camps for a range of alleged infractions, including attempting to escape and radicalising their children.

Eight unaccompanied children described as “orphans” were also living in the prison. Authorities said the children had been separated from their primary caregivers when it was discovered that the women they arrived at the facility with were not their biological mothers. It was not clear why the children remained in the prison.

Conditions in the prisons holding children are reportedly “abhorrent”, according to a May report by a UN special rapporteur, which said they “met the threshold for torture, inhuman and degrading treatment under international law”.

Many are reportedly detained without access to sunlight or showers and exposed to tuberculosis, coronavirus and other communicable diseases, wrote Fionnuala Ní Aoláin, the special rapporteur on the promotion and protection of human rights and fundamental freedoms while countering terrorism.

“No children should have to endure” such conditions, she wrote.

When the New York Times gained rare access to a jail holding IS prisoners during the tumult of a Turkish offensive in 2019, they found 86 children crowded into one cell and 67 in another. The paper described their ages as between nine and 14.

The anti-IS coalition has since provided funds to improve prison conditions.

In August, Lieutenant General Paul Calvert, the coalition commander, announced the UK had pledged $20million to upgrade the main facility holding IS fighters near Hassakeh. The SDF said UK funds had also been used to upgrade the women’s prison in Hassakeh and the adjoining Helat Centre.

The coalition said that in addition to support to “repair and renovate” detention facilities, it provides food, water, fuel and sanitation support to improve detention conditions. The coalition referred questions about the detention of children to the SDF.

“As part of the global coalition against daesh the UK has provided technical advice and funding for the refurbishment and expansion of a detention facility for daesh fighters, and their affiliates, in north-east Syria,” a government spokesperson said using an alternative term for IS.

“UK support is intended to enhance conditions for those detained and help meet international standards. Any decision in relation to the detention, transfer or prosecution of individuals is ultimately a matter for the detaining authorities.”

The SDF said it needs more help to improve conditions in prisons and for foreign governments to repatriate their citizens.

“We fought IS with the world but now we have been left to deal with the fallout alone,” Redur Khalil, a senior SDF commander, told The Telegraph. “The international community needs to find a permanent solution to this problem.”

“Most of them were cubs of the caliphate and it was not possible to put them in al-Hol,” he said. “They were a risk, there was no alternative.”

Mr Khalil said that the United Nations are “supervising their situation”, though the UN’s children agency says it has no direct access to children detained in north-east Syria.

These figures were disputed by Unicef, which said it was aware of at least 850 children imprisoned by the SDF.

Experts say the longer children are left in prison, the harder it will be to rehabilitate them.

The manager of the Helat Centre said they eventually planned to separate some of the children from their mothers.

“There is endless conflict between us and the mothers,” Perwin Ali told The Telegraph. “They keep them up at night teaching their kids radical ideas.

“This is why we are planning to have bedrooms to keep them here because we’re not getting anywhere [with deradicalisation]. We will not cut relations with the mothers, they will be allowed to visit them every day.”

International law states that children should only be forcibly separated from their parents as a last resort. But with authorities in north-east Syria lacking a legal system to judge foreign nationals, Ms Ali said they needed more help.

In addition to the Helat Centre, authorities have opened another deradicalisation centre that can care for about 150 teenage boys. But there is no plan for their release, with boys returned to prison when they turn 18.

While they plan to open a third facility to care for another 250 boys, many more are entering the prison system.

At the sprawling al-Hol camp there are an estimated 27,000 children. When boys there reach puberty, authorities forcibly separate them from their mothers and take them to prisons.

“They are a threat to camp residents and NGO workers, this is the only reason to remove these kids from the camp,” said Mr Khalil.

Other officials said boys were removed from the camp to prevent pregnancies in the camp.

“Women are getting married to young boys to create the next generation of the caliphate,” said Vian Adar, a commander involved in guarding prisoners.

“We don’t know how else to deal with it other than by removing them.”