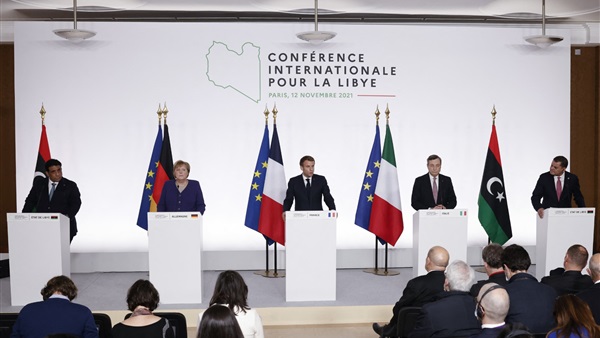 The recommendations of the Paris International Conference on Libya showed a red eye to all parties that are trying to obstruct the democratic path in the country and prevent the upcoming Libyan elections, which are scheduled for December 24, by threatening to impose international sanctions. It is noteworthy that the UN Security Council imposed sanctions against Libyan political figures for their role in the conflict.

The participants in the international conference, which included France, Libya, Germany, Italy and Egypt, in addition to the US Vice President, called on Turkey and Russia to withdraw the mercenaries from Libya as soon as possible because their presence threatens the stability and security of the country and the entire region, in addition to offering full respect for Libya’s sovereignty, independence, territorial integrity, and national unity, and rejecting all foreign interference in Libyan affairs until the road map succeeds and access to a comprehensive political process is achieved and led by the Libyans exclusively with the support of the United Nations. This is considered a defining moment to end years of chaos and terrorism not only in Libya but in North Africa and the Mediterranean, and it comes at a time when Turkey rejected the recommendations and confirmed that its forces are in Libya at the invitation of the UN-recognized Government of National Accord (GNA).

Despite the international community’s support for the completion of the elections on their scheduled date on December 24, there are still a number of challenges that may hinder them being held, perhaps the most prominent of which is the deteriorating security situation in western Libya and the non-stop acts of violence between armed militias deployed in western Libya with the aim of disrupting the holding of elections, or to ensure control over areas with a relative weight influencing the voting process.

The relations between the members of the transitional authority are also witnessing internal crises, in addition to the traditional tensions between the Government of National Unity (GNU) and the House of Representatives in Tobruk. Disagreements erupted between the government and the Presidential Council, which were clearly embodied recently over the file of dismissal of Foreign Affairs Minister Najla Mangoush, as well as within the government of Abdul Hamid Dabaiba itself, in addition to disputes between the latter and First Deputy Prime Minister Hussein al-Qatrani. There is also a lack of agreement between the Libyan political forces on the parliamentary and presidential elections laws, despite the fact that the High Electoral Commission approved them.

Although there is a European-American consensus on settling the Libyan crisis, especially with regard to the elections and the exit of mercenaries and foreign forces, there is no actual pressure on Turkey to expel the Syrian mercenaries, perhaps to use them as a bargaining chip for Russia to get its mercenaries out of eastern Libya.

Emmanuel Dupuy, head of the Institute for Prospective and Security in Europe (IPSE), believes that the Paris conference will not contribute to resolving the Libyan crisis and progress in the democratic process with the continued presence of mercenaries on Libyan soil and will not change much of the volatile political situation in Libya, especially after the absence of a number of leaders such as the Turkish, Russian, and Algerian presidents.

According to Dupuy, the pressure of the major Western powers and their rapid desire to hold the Libyan elections next month despite all these divisions will inevitably lead to the holding of fragile elections that are open to failure and a return to square one, which means that the state of chaos and the militias’ control over the northwest of the country will not end after the elections.

According to previous data and the results of the Paris conference, there are three scenarios regarding the Libyan road map, the first of which is to postpone the elections indefinitely, as press reports indicated the presence of pressure from the Dabaiba family to postpone the elections. This is supported by a statement of Qatrani, who said, “Everyone who is currently in power does not want to hold elections.” This scenario opens the door again towards an increase in division and armed conflict in the country.

The second scenario includes postponing the elections for a period of six months with the introduction of amendments to the road map to resolve the controversial files, especially the laws regulating elections and the conditions for candidacy, as well as the file of mercenaries and foreign forces.

Holding the elections on time is the last possible scenario, and this is reinforced by the announcement by many actors inside the country that they are running in the elections, led by Khalifa Haftar, Fathi Bashagha and Saif Gaddafi, but there are no guarantees regarding the prevention of a security chaos that would obstruct the voting process, affects the electoral process, or rejects the election results, as the losing party will inevitably reject the result, which opens the door to division and civil war.