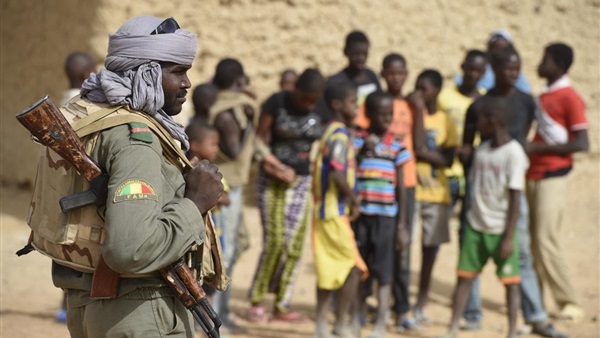 Jihadist groups have ramped up attacks in Africa's Sahel region as France prepares to shut down its military operation and withdraw some of its 5,000 soldiers from the region in the long-running conflict dubbed 'France's Afghanistan'.

The situation remains volatile. In the past few days, suspected armed extremists kidnapped then released five Catholics, including an abbot, in central Mali, where a car bomb also went off, injuring six French soldiers and four Malians.

Attacks have also surged in neighbouring Burkina Faso, where child soldiers stormed a tiny village and killed up to 160 people earlier this month near the border with Mali and Niger.

It was the bloodiest single-day toll in the six-year-old emergency there, fuelled by armed groups linked to Islamic State and al Qaeda.

"We will initiate a profound transformation of our presence," he told a press conference ahead of the G7 Summit.

"The form of our presence, in the form of an external operation, is no longer suited to the reality of the fighting."

French armed forces would leave the northern Mali military bases of Kidal, Timbuktu and Tessalit by the end of the year, according to plans currently being reviewed by the government.

Instead, France plans to stay on to support severely under-equipped and under-trained local armies as a member of the EU military task force Takuba.

Yet Takuba is only made of 600 soldiers, half of whom are French. Despite Italy and Denmark pledging hundreds more troops, the mission is still short of its goal of 2,000 fighters.

"What is important to understand is that France's military commitment will remain very significant," said Florence Parly, France's defence minister.

France, the former colonial power, sent troops to Mali in 2013 to help push back jihadist groups that were threatening to take over the capital, Bamako, after a new Tuareg rebellion in the north.

At the time, soldiers were hailed for "saving the country." But eight years later, resentment is growing against the military intervention, both in France and in the Sahel.

A withdrawal must be done intelligently so as not to have the Russians or the Chinese come to occupy the void that we have left," France's former army chief, General Lecointre, said before the announcement.

In the meantime, jihadist groups have strengthened their hold and expanded in the region despite several high-profile leaders being killed by the French army.

IS propaganda is increasingly focusing on sub-Saharan Africa including in West Africa, where it now controls territories from Libya to northeast Nigeria, across the Sahel region and as far south as Benin or Ghana.

The operation known as France's Afghanistan is seen as a never-ending, unwinnable conflict in which soldiers lose their lives without noticeable improvement for civilian populations.

While the former colonial power has always been firm in its refusal to negotiate with extremist groups, local leaders and governments have supported the strategy in Mali and Burkina Faso, as armed groups build a lasting presence in more and more territories.

French forces have also been accused of killing civilians, including in an airstrike on a wedding in central Mali in January which killed at least 22 people. According to the first-ever UN investigation into French military operations, a vast majority of civilians were then killed and the country may have been guilty of a war crime.

An investigation published by Germany's Der Spiegel and The New Humanitarian in early June revealed that at least 50 civilians have been killed by French soldiers since 2013. The defence ministry has publicly acknowledged only seven deaths in direct attacks in the Sahel.