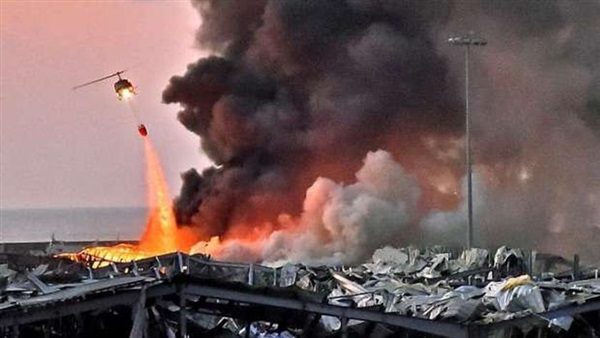 The families of the victims of the Beirut port explosion have warned that the “grace period has ended and we will not allow our martyrs to be killed again.”

They accused the authorities of trying to distract public opinion with arrests of some administrators instead of officials, threatening that they would not remain silent.

On Wednesday, Lebanese Prosecutor Ghassan Khoury ordered the release of seven people who were detained after the deadly massive blast at Beirut’s port on Aug. 4 last year.

One of the largest non-nuclear blasts in history was caused by a vast stock of highly explosive ammonium nitrate that had sat for years in a port warehouse, little more than a stone's throw from residential districts.

Khoury’s decision came a day after the Lebanese judge leading the investigation into the explosion requested the release of 13 people who were detained in the case.

The judge only approved the release of seven persons, most of them junior port employees.

On Wednesday, the families of firefighters, who were first to arrive at the port to contain the fire that preceded the explosion, blamed the authorities for the lack of progress in the investigation.

“After waiting for four months for serious procedures to start to hold those who are responsible accountable, unfortunately we have yet to witness any results,” a statement released by the families said.

They noted that the detention of low-ranking employees was as an attempt to “distract the public” and shift attention away from investigating “security officials, politicians, and judges”.

“The source of the (ammonium) nitrate is known and the country that imported them is known. The nitrates are explosives and not an ordinary commodity. So where are the responsibilities of the judiciary and the security forces?” they asked.

A delegation of the families of the victims met with Minister of Justice in the caretaker government, Marie-Claude Najem, who stressed that the judiciary was “responsible for clarifying the truth and imposing the law in order to achieve justice.”