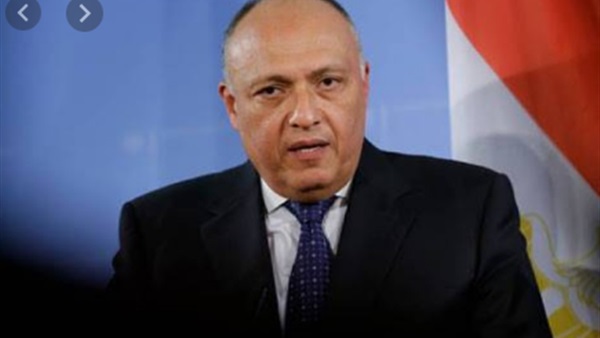 Egyptian Foreign Minister Sameh Shoukry arrived Monday in Ramallah where he met with President Mahmoud Abbas and discussed the recent developments and the ceasefire in the Gaza Strip.

Ministry spokesman Ahmed Hafez said the visit comes within the framework of continuing efforts to ensure the ceasefire holds and rebuild Gaza after the recent Israeli airstrikes.

Shoukry called for serious negotiations that lead to a “comprehensive and just peace” which will guarantee the two-state solution and restore peace and stability.

He also stressed the importance of stopping all forms of escalations, which hinder efforts to bring about peace, especially in East Jerusalem

Abbas praised the Egyptian efforts to stop the aggression against the Palestinian people, praising Egyptian President Abdel-Fattah al-Sisi's initiative to provide $500 million for the reconstruction of the devastated Gaza Strip.

Shoukry’s visit to Ramallah came hours after he discussed the recent developments and reviving the peace process with his Jordanian counterpart, Ayman Safadi, in Amman.

In a joint press conference, the two ministers affirmed the need to join efforts to maintain the ceasefire, end all Israeli violations, and find the necessary political means to support Palestinians and meet their legitimate rights.

Safadi and Shoukry called for an effective international position to maintain the ceasefire between Israel and Hamas, which began last Friday.

The Jordanian FM noted that the priority is to ensure the continuation of the ceasefire and cessation of Israeli aggression against Gaza.

He warned that enforcing a siege on the Sheikh Jarrah neighborhood would refuel tensions, considering the Israeli displacement of Palestinians from the neighborhood a “war crime” that should be prevented by the international community.

He pointed to the importance of preventing repeated Israeli attacks, the Sheikh Jarrah issue, and other practices that led to the escalation and resorting to military actions between Israel and Hamas.

“What Israel is doing in the West Bank necessitates Egypt communicating with Jordan,” Shoukry said, pointing to “the importance of crystallizing an international position to stabilize the calm.”