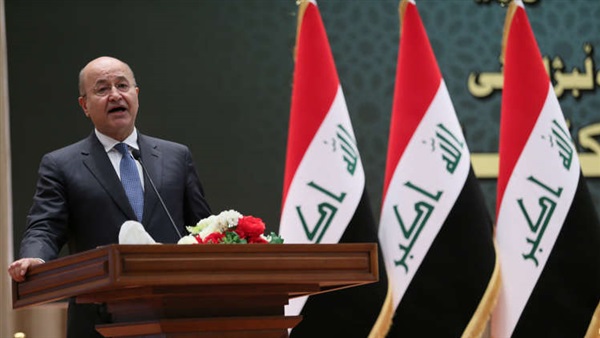 Iraqi President Barham Salih stressed the importance of guaranteeing the appropriate conditions for the success of the upcoming parliamentary elections, scheduled to take place on June 6.

During a meeting with a delegation of Al-Amal Al-Kurdistaniyah alliance, the president said the elections should be held in a suitable atmosphere, away from fraud, manipulation and pressure.

He also called for “concerted efforts to reach radical solutions to the outstanding issues between the Kurdistan region and the federal government, based on the constitution, and for the 2021 budget to guarantee the rights of all citizens.”

In a session with a number of writers and media professionals, attended by Asharq Al-Awsat on Monday, the Iraqi president said that the upcoming elections were “gaining momentum following calls by the popular movement and a broad public opinion for the need to change the current situation and correct paths.”

“The integrity of the electoral process must be a top priority that guarantees the right of the voter to choose his representatives away from fraud and influences, in order to be the starting point for a new political pact that fulfills the aspirations of the Iraqis,” he emphasized.

Meanwhile, Abdul-Hussein Al-Hindawi, the advisor to the Prime Minister for Elections Affairs, denied a plan to postpone the polls.

In a statement, he said the elections “will be held by the government as scheduled on June 6, and no postponement has been proposed.”