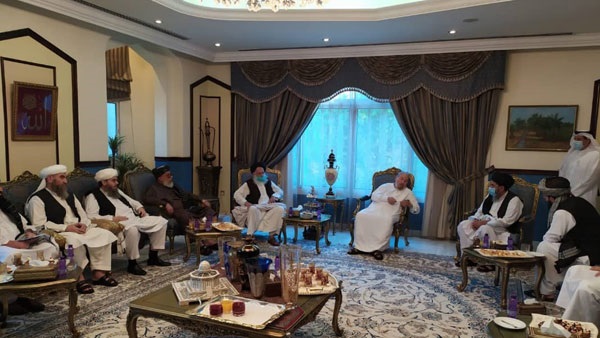 While the intra-Afghan talks are deadlocked in Doha, it appears the Islamic Emirate of Afghanistan (the Afghan Taliban organization) is using the downtime in the Qatari capital to engage with foreign diplomats and Islamic clerics.[1]

On October 5, the leaders of the Islamic Emirate met with the Qatar-based International Union of Muslim Scholars founder and former director Sheikh Yousuf Al-Qaradawi, who is considered the spiritual leader of the Muslim Brotherhood and is known for his support for jihad and martyrdom operations, his anti-U.S. statements, and his calls for killing Jews – including in a second Holocaust to be carried out by the Muslims – and for an Islamic conquest of Europe.

The Taliban delegation was led by Sheikh Mawlawi Abdul Hakim, the Islamic Emirate's chief justice and head of the Taliban's negotiations team in Doha. After the meeting, the Islamic Emirate published a statement, saying: "[Hakim] welcomed affinity displayed by Sheikh Yusuf Al-Qaradawi and informed him about the current jihadi situation of the country and proceedings of the agreement concluded with the United States."

The agreement between the U.S. and the Taliban was signed in Doha on February 29, 2020, paving the way for the withdrawal of American troops from Afghanistan. At the meeting, Al-Qaradawi also told the Taliban leaders: "We're yours and you're ours" – as per a tweet of Muhammad Naeem Wardak, the spokesman of the Islamic Emirate's Political Office in Doha.

Afghan Taliban To Sheikh Al-Raysuni: "Our Jihad Against Foreign Invasion Is Aimed Towards Ending The [American] Occupation And Establishing An Islamic Government"

Earlier, on October 2, the Taliban delegation also met with Islamic scholar Sheikh Ahmad Al-Raysuni, current leader of the International Union of Muslim Scholars (IUMS). At that meeting too, the delegation was led by Sheikh Mawlawi Abdul Hakim.

According to a statement issued by the Taliban organization, Hakim told Sheikh Al-Raysuni: "Our jihad against foreign invasion is aimed towards ending the occupation and establishing an Islamic government. Now that we have concluded termination the occupation agreement with America, the Islamic Emirate is obligated by the Doha agreement to also successfully conduct intra-Afghan negotiations.

Sheikh Al-Raysuni "backed and praised the prudent approach and policy of the Islamic Emirate along with the role of scholars in [the Taliban's] leadership position, in addition to calling ongoing intra-Afghan negotiations a good step forward" – as per a Taliban website.

The intra-Afghan talks in Doha are deadlocked over a key point: The Afghan Taliban are demanding "a pure Islamic government" in Afghanistan based on the Hanafi jurisprudence of Sunni Islam, while the Afghan delegation, which includes government officials, favors a democratic government based on republican institutions.

While the intra-Afghan talks remain deadlocked, the Islamic Emirate has reinvigorated its policy of meeting with diplomats, officials of international organizations, and Islamic clerics.

On October 5, the Taliban organization issued the following statement: "With the start of intra-Afghan talks in the Qatari capital of Doha, the political representatives of the Islamic Emirate [have] also begun a series of meetings with political envoys and emissaries of various countries and international organizations. Although the process of meetings and political trips to regional and world countries by the representatives of the Islamic Emirate had begun some years earlier, with visits to multiple countries and participation in international conferences where the rightful demand of the Afghan people was announced to world masses, however this process is rejuvenated once more with the launch of intra-Afghan dialogue.

"Meetings of such caliber between the Islamic Emirate and world community specifically with representatives of Muslim countries hold a special place because some 19 years earlier after the foreign invasion of Afghanistan [following the 9/11 terror attacks], all rights of political participation and announcements were snatched from the Islamic Emirate. For around one and a half decade, the media broadcasted [sic] distortions, circulated all kinds of propaganda and published all sorts of half-truths and twisted information about the Islamic Emirate.

"One can confidently say that the meeting some days earlier between the representatives of the Islamic Emirate with the president and representatives of the Union of Muslim Scholars in Doha, answered many questions of Islamic world Ulama [Islamic clerics] and alleviated concerns they had developed over the past two decades.

"The cordial and candid atmosphere of the meetings professed to the fact that the Islamic Emirate has nothing to hide which might spark concerns in the Islamic world or academic circles. The only issue of concern is the great barrier created between worldwide Muslim communities and the Islamic Emirate by the torrent of propaganda – once eliminated through face-to-face dialogue, it shall also work to end the twisted understanding of the Islamic Emirate these communities have developed.

"Keeping this in mind, both sides need to make use of this opportunity at hand. The Islamic Emirate must promulgate its rightful claim to every corner and community of the world, while the countries of the world, organizations and especially academic foundations actively working for Islamic unification and progress must develop and direct permanent relations with the Islamic Emirate. They should relay their good advice to the Islamic Emirate, scrutinize its actions in reformist manner and lend sincere support in problem resolution."