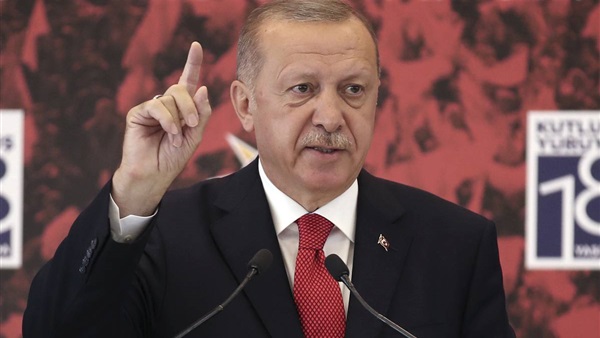 Turkish President Recep Tayyip Erdogan’s anger at the intention of the President of the Presidency Council of the Libyan Government of National Accord, Fayez al-Sarraj, to step down from his post at the end of next October indicates that Sarraj did not complete everything that was asked of him by the Turks in exchange for their intervention to repel the Libyan National Army’s attack on the Libyan capital, Tripoli.

The Turkish President’s annoyance piqued the curiosity of political observers, who attributed that anger to either the political dimension of Sarraj’s decision or its economic significance. They excluded the existence of a military reason, given that Turkey has direct access to most of the militias in Tripoli, and most of them are loyal to the Minister of Interior in the Government of National Accord Fathi Bashagha.

Commenting on Sarraj’s decision to step down, Erdogan said, “A development like this, hearing such news, has been upsetting for us,” indicating that Turkish delegations may hold talks with the Sarraj government next week.

“With these meetings, God willing we will turn this issue towards the direction it needs to go,” Erdogan added.

Reuters quoted a Turkish official as saying that “Sarraj’s resignation announcement was the second recent surprise for Ankara in Libyaafter a ceasefire announcement last month.”

“We would prefer for Sarraj to remain in his post because under his leadership a united Libya that has resolved its issues could emerge,” the official added.

He explained: “If Sarraj does not remain in office, there are some names who are involved in the processes and can take the GNA forward. These are, of course, Libya’s own issues, but Turkey may provide some support.”

In order to understand the real reason for the Turkish annoyance with Sarraj’s decision, it is necessary to determine his exact function, weight, and importance on the ground. The recent street protests and the display of force carried out by the militias and military leaders loyal to Fathi Bashagha have proven that Sarraj does not have any popularity or military weight despite being the supreme commander of the army. His importance, therefore, at least for the Turks, is confined to his power to sign economic agreements.

This is why some observers suspect the existence of economic understandings, most likely, between Sarraj and Ankara that have not been implemented yet and they do not exclude the possibility that they could be related to the ports, especially the port of Misrata.

Recent reports by Italian media talked about Turkey preparing to establish a Turkish naval military base inside the port of Misrata, while other reports spoke of Ankara’s ambitions to control the whole of the seaports in western Libya.

Moreover, Turkish officials have already confirmed that there were talks with the Libyan authorities about starting oil and gas exploration operations in onshore and offshore fields, in addition to talks about other energy-related fields such as electricity production.

Last week, the Libyan Audit Bureau expected the Turkish company ENKA to resume implementing its construction projects of power stations in Libya within days, and this following a meeting last Sunday between the company’s officials and Khaled Shakshak, head of the Audit Bureau.

Moreover, the governor of the Central Bank of Libya, Sadiq al-Kabir, had signed this past September 6 a cooperation agreement with the Turkish Ministry of Industry and Technology, without the presence of any government representative, even though Fayez al-Sarraj was in Ankara at the time. That development raised everybody’s suspicions.

And even before that, a cooperation agreement was signed between the Turkish Central Bank and its Libyan counterpart, which reflected Turkey’s urgency to sign agreements before the arrival on the scene of a new government and the replacement of al-Kabirwith a new governor.

At the time, Libyan media had leaked that there were Turkish efforts to mediate between Sarraj and Sadiq al-Kabir, but obviously, these efforts have failed.

In the event of Sarraj stepping down before Ankara could secure guarantees for the implementation of its future projects, Turkey will be forced to start all over again with the next government, although it is still likely that this government too will be controlled by its Islamist allies.

Ankara’s annoyance with Sarraj’s resignation plan might also be related to its ambitions to penetrate the political process in Libya in order to control it from the inside. The members of the Parliament’s Dialogue Committee, thought to be affiliated with Sarraj, and who had defected from the parliament in protest of the army’s attack on Tripoli, may very likely switch loyalties again.

The Parliament’s Dialogue Committee consists of 13 MPs, only seven of whom are still loyal to the parliament in session in Tobruk, while the remaining six had defected and joined the sessions of parliament held by some Islamist representatives in Tripoli.