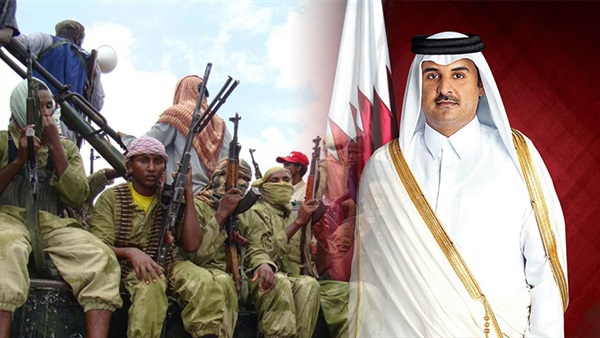 Qatar seizes every opportunity to expand its influence in the African Continent. In Somalia, for example, Qatar's protégés do nothing but impose a Qatari agenda. A study by UAE think tank al-Mezmaah Studies and Research Center revealed the presence of strong contacts between Doha and Somali officials, local leaders and even militia leaders in the restive and poor African state.

US Secretary of the Treasury David Cohen said earlier that Doha turns a blind eye to work done by its terrorism financiers. Doha, he said, even authorizes the financing of terrorism.

The al-Qaeda-affiliated al-Shabaab movement has been intensifying its terrorist activities in Somali capital Mogadishu for some time now. This intensification of activity by the movement coincided with the appointment of Fahd Yassin, a former reporter of the Qatari news channel al-Jazeera, as the deputy head of the Somali intelligence and national security agency. Yassin is also a member of the Muslim Brotherhood movement in Somalia. Yassin's presence in this position threatens counterterrorism efforts, not only in Somalia, but also all throughout the Horn of Africa.

According to the news site, Sunatimes, Yassin was born in the eastern Kenyan Mandera County in 1978. He studied journalism in Yemen and then worked at a new site that was owned by the Islamic Federation of Somalia. Yassin then moved to al-Jazeera and was appointed as the chief of the channel's bureau in Mogadishu.

Yassin started his Islamist life as a Salafist, but then joined the Brotherhood. He also became member of the Islamic Federation group, which has already been dissolved. He also participated in battles in a number of Somali cities, according to Sunatimes.

Yassin established strong contacts with the leaders of al-Shabaab movement as a correspondent of al-Jazeera and then the chief of the channel's bureau in the Somali capital. Gen. Abdullah Abdullah, a former official of the Somali intelligence agency, said he has documents proving the presence of relations between Yassin and the leaders of al-Shabaab. He even said he is ready to present these documents to the courts.

According to Sunatimes, Yassin has become the point of contact between Qatar and militias operating in Somalia, including al-Shabaab movement. Qatar, it added, also asked Yassin to prepare reports about everything happening in Somalia.

Yassin led a campaign of support for Somali president Hassan Sheikh Mohamud, but then turned against him and strengthened his links with President Mohamed Abdullahi Mohamed Farmajo since he was the prime minister of Somalia in 2011. He then backed Farmajo's presidential bid after Qatar approved this. He brought huge funding for Farmajo's presidential campaign from Doha.

According to a Somali intelligence report published by Sunatimes, Yassin had secured support to Farmajo's presidential bid from 70 Somali lawmakers by paying salaries to these lawmakers, averaging between $3,000 and $4,000. The same lawmakers voted for Farmajo in February 2017. In June 2017, Farmajo appointed Yassin as the head of his office. The Somali president then appointed Yassin as the deputy head of the Somali intelligence and national security agency. That was on August 16. Yassin's job now is to restructure the agency in a way that serves the best interests of both Qatar and the Muslim Brotherhood movement.

Yassin played a role in nominating Hassan Ali Khayre for the post of Somali prime minister. Khayre was active in the support of refugees. He has a dual Somali-Norwegian nationality. He is now the architect of Somali policies. He is also responsible for the appointment of senior officials in sensitive government positions.

Mohamed Said Atom is another Qatari agent in Somalia. His name was included in a list of wanted figures that was submitted by the member states of the Anti-Terrorism Quartet to Qatar.

Born in 1966, Atom joined the al-Shabaab movement and became the second-in-command in the movement. He founded a branch of the movement in the northeastern Somali state of Puntland. In 1998, the leaders of the new branch of the movement declared the independence of the state from the Somali mainland. Somali leaders disapprove of this and view it as an attempt to turn Somalia into a federal state. Nevertheless, Puntland is averse to Qatari influence in Somalia.

Atom escaped to Qatar in February 2016. In Doha he enjoys immunity, despite the presence of demands for handing him over to Somali authorities.