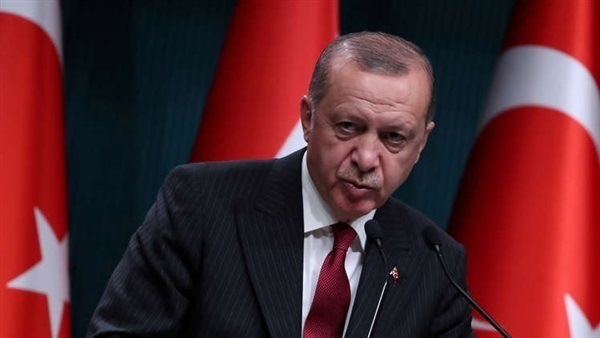 Turkish President Recep Tayyip Erdogan is striving to consolidate his Ottoman project, which he is striving to implement, even at the expense of his people and his countrymen, through a religious dye, so he deals with all those who oppose him as infidels or enemies of Islam, to achieve political gains and save his declining popularity.

The decision to convert the Hagia Sophia Museum to a mosque is part of a political campaign that employs religious messages to control the voter base of the religiously populous.

The Turkish president always tries to appear in the image of the believing president, sometimes to send himself a video clip of him reading the Quran, sitting on a desk and his voice heard and singing in Arabic.

The explanation attached to the video says that the president was sealing the Qur’an on the occasion of Ramadan, which is a striking example of how religion is used in politics in Turkey.

Religion is a Trojan horse through which Erdogan and his party crept into the hearts of voters. When the Turkish president realized his party’s defeat in the local elections held in March 2019, Erdogan used the mosque massacre in Christchurch, New Zealand to manipulate the feelings of Muslim Turks for electoral purposes, to appear as the protector of Muslims and the alleged caliph A week before the municipal elections, he returned to employing the Hagia Sophia case by announcing that he would turn this museum into the Hagia Sophia mosque, then Erdogan hinted, saying: After the elections, it will be possible to enter the Hagia Sophia for free, as is entering the Blue Mosque.

In an attempt to tickle the feelings of the Turks, Erdogan previously stated that he wants to form a religious generation in the country that believes in Ottoman culture and overcomes Western ideas, through mandatory religious education classes until the third grade and the inclusion of the Ottoman Turkish language in the school curriculum as a compulsory subject. State institutions fully in 2013.

Erdogan employed the religious discourse to calm the Turkish interior and anesthetize them so that they would not explode in his face due to his failed policies and the deteriorating conditions in which the country’s status has fallen. Former Grand Mufti of Ihsan Ozak that the Prophet Muhammad (peace and blessings be upon him) if he were alive would visit the Erdogan Palace, and wrote on his account on the social networking site Twitter: "I thought today if our master Muhammad (peace be upon him) was alive among us, would he enter the palace? White in Ankara? And this evening when I was in the palace, I felt that he was definitely going to enter it, because there are many emirates of the noble Sunnah of the Prophet.

While Erdogan's advocates called on the Turkish people to accept deteriorating conditions in the country under the pretext of fighting enemies, they said: “We are at war; It is not permissible to complain about the absence of justice, as the authorities may fail to achieve justice, deviate from the right path, move away from honesty, and be subject to deterioration, but it is not permissible to complain about all of this if it would cause excuses for the enemy.

The Turkish president also used religious rhetoric to be a cover for his military operations, as do terrorist groups and organizations, as a source for peoples and nations that he is the bearer of the caliphate, responsible for championing Muslims in the world and their salvation from oppression and injustice, and seeking to implement Islamic law, and hiding from people that their primary engine In these colonial campaigns, Erdogan reaps material and political gains.

As "Ali Arbash," the head of the Turkish religious authority, "Diana", portrayed Erdogan's wars in Jerusalem by posting a tweet on his official account on Twitter, in which he called on all mosques to read "Surat Al-Fath" every day during the morning prayer, throughout the period of the military operation in Syria, we will read And we pray Surat Al-Fath in the morning prayer in all our mosques so that we achieve victory in the military operation that our security forces started against terrorist organizations in northern Syria, with the intention of the Kurdish factions, which Ankara considers "terrorist" because of its association with the PKK, which fought a revolt inside Turkish territory, not to blame that This is an assault on defenseless peaceful people despite the killing of children, women and the elderly in the Syrian state.

Erdogan also used external religious rhetoric to justify his crimes and justify Turkish interventions in Libya with jurisprudential and legal rules, such as "pushing the enemy enemy" and "establishing the caliphate" and "applying the Sharia", such as the fatwa of the Libyan Sheikh Omar Mawloud Abdel Hamid "The request of the government of national reconciliation (the Libyan) Aid from the Turkish government is a legitimate and irreversible right, given that Turkey is a Muslim country and Libya is a Muslim country ... and we support our government in what it does; Because one of the items in this memorandum is our victory over a liquid enemy (meaning Russia). He has no right to do what he does. ”

As for the Libyan preacher, who is close to the terrorist group, the Muslim Brotherhood, “Al-Sadiq Al-Gharyani”, he stated that this Turkish intervention is “lawful and legitimate,” and Al-Gharyani cited such verses in the Qur’an.