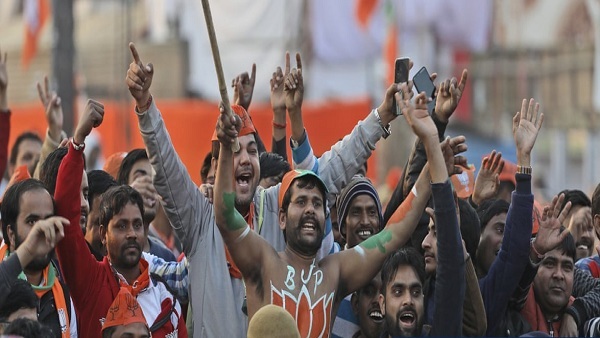 standing before a political rally in Delhi, Yogi Adityanath, the firebrand Hindu nationalist chief minister of Uttar Pradesh known for preaching hate and violence against India’s Muslims, did not mince his words.

The thousands of women who have been gathered for two months in the Delhi suburb of Shaheen Bagh in protest against India’s new citizenship law were “terrorists”, he said.

“The protests happening at various places in Delhi are not because of the Citizenship Amendment Act,” said Adityanath, to roars from the orange-clad crowd gathered before him on Sunday. “They are happening because these people want to prevent India from becoming a global power.”

Terrorists, he added, should be fed with “bullets not biryani”.

In the weeks leading up to the Delhi state elections on Saturday, candidates for the Hindu nationalist Bharatiya Janata party (BJP) have been out in force. They are desperate to wrench victory from the hands of the ruling anti-corruption Aam Aadmi Party, who have had held 67 out of 70 assembly seats since the last election five years ago.

But even for the BJP, which has an openly Hindu nationalist agenda, the campaign has been one of their most brazenly anti-Muslim yet, as exemplified by the decision to bring Adityanath – one of the BJP’s most militant voices – out on the campaign trail.

The BJP has governed India on a national level since 2015, and prime minister Narendra Modi was returned to power by a landslide in May, but the Delhi election follows a slew of BJP losses at state level. More significantly, it is also happening against the backdrop of India’s worst period of unrest for over four decades, sparked by the passing of citizenship amendment act (CAA) in December, which many say discriminates openly against Muslims. With the protests showing no sign of abating, Modi and his BJP government are determined to seize back the narrative by winning Delhi.

“For BJP this state election is a referendum on CAA,” said Sandeep Shastri, political scientist and Pro Vice Chancellor of the Jain University. “They are trying to build up a sense that the whole nation is in danger.”

According to Shastri, even some in the party have felt the Delhi campaign has gone too far. “It is not the first time the BJP have pushed these boundaries, but in Delhi it feels more open then ever before,” he said. “But if you speak to some BJP leaders in very strict confidence, many of them are not comfortable with the way the campaign is moving and the shrill pitch of the campaign rhetoric.”

The focal point of the BJP’s fear-mongering narrative has been the women of Shaheen Bagh, thousands of female protesters who have been camped out in the cold Delhi winter since December and blocking a major road, in protest at the CAA. The women, mainly Muslim but also many Hindus, are mostly housewives who have never taken part in political action before.

For the hundreds of women who have been camped out every day at Shaheen Bagh, to find themselves classed as terrorists and anti-nationals by the BJP, and accused of being paid to protest, has been both baffling and alarming.

Divyanshi Kusum, 32, a housewife who had been taking part in the Shaheen bagh protest for two months, said: “We are not worried and not afraid and are not even thinking about these allegations. We know this is the tactic of the BJP, in elections they play dirty and are unethical. Everything they accuse us of is false, we have no political motives.”

But Kusum said that she was still troubled find herself described as an enemy of India. “It feels very sad to be be told that I don’t love my country by the people in power,” said Kusum. “Muslims stayed in India after independence by choice, we were given the choice to go to Pakistan but we remained because we love our country. And this is what you give back to people who chose this country: that because we are sitting in a protest, as is our democratic right, that we are anti-nationalist?”

The fear-mongering has continued to escalate. Speaking at a public address last week, the BJP MP for West Delhi, Parvesh Verma warned Delhi voters that “these people [at Sheen Bagh] will enter your house, will abduct your sisters and mothers, rape them, kill them, that’s why today is the moment.”

Verma added: “It is an election to decide the unity of a nation. If the BJP comes to power on 11 February, you will not find a single protester within an hour. And within a month, we will not spare a single mosque built on government land.”

While Verma’s comments later earned him a warning notice from his party after they were flagged to the election commission, the polarising rhetoric has been almost uniform across BJP campaign speeches. At one rally, Union minister Anurag Thakur led a crowd of BJP supporters in chanting the slogan “shoot the traitors”, referring to the CAA protesters, while home minister Amit Shah asked Delhi voters at an election rally if they were with “Modi or Shaheen Bagh”. Meanwhile, Delhi’s AAP chief minister Arvind Kejriwal has repeatedly been described as a “terrorist” in BJP speeches for his alleged support of Shaheen Bagh.

The BJP Delhi spokesperson Sambit Patra did not respond to multiple requests for comment.

Sanjay Kumar, director of Centre for the Study of Developing Societies, said the strategy was an attempt by the BJP to move the narrative of the election away from the economy, education and healthcare, areas they are weak on, and instead play on long-standing divisions between Muslims and Hindus.

“Over the past two years, whenever the BJP has had to be defensive in a campaign, we have always seen them try to rip up very important communal and emotional issues, and polarise voters down religious and nationalist lines, and that is what we are seeing in Delhi,” said Kumar. “But while that works on a national level, on a state level in Delhi I don’t think it will win them votes, even among those who support CAA.”

Yet the polarising narrative appears to already have had wider ramifications. Last Friday, and again at the weekend, two shootings occurred in Muslim-majority areas of Delhi by gunmen who shouted Hindu nationalist slogans. The first shooting was at Jamia Milia Islamia, the Muslim-majority university which has been at the heart of the CAA protests, and another was in Shaheen Bagh.

In an open letter sent to Modi this week by over 160 women and 13 organisations they urged the BJP to stop using the election campaign to stir up communal tensions in Delhi.

“Is the BJP now openly endangering the lives of India’s women and children?” asked the signatories in the letter. “This is what history will record and India will not forgive, Mr Prime Minister. We condemn this attempt to demean our histories of pain and fear by using it for cheap, divisive electioneering.”