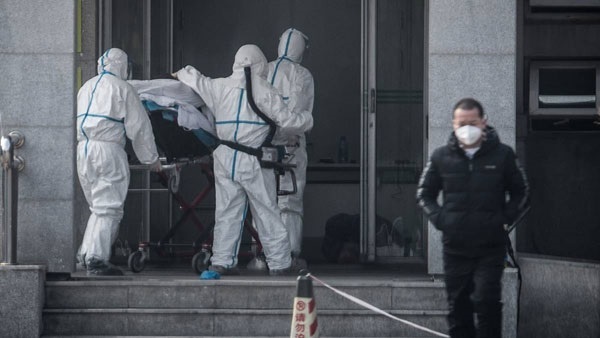 22 Chinese provinces have now declared a level 1 emergency, allowing them to introduce measures including quarantine. 1,287 people are now reported to have been infected in China.

Coronavirus has flu-like symptoms, which can develop into severe respiratory problems.

The current outbreak is understood to be a new strain of coronavirus, not previously found in humans. The virus can be transmitted between humans and animals, making it harder to contain.

Other strains of coronavirus are not as dangerous - the common cold is one.

Authorities have said that the current strain of the virus originated at a seafood market in Wuhan, in the Hubei province of China, which has seen the most severe outbreak of coronavirus. It is thought that the market was engaged in illegal wildlife sales, and has now been shut down.

Hu Yinghai, the deputy director general of the civil affairs department in Hubei province, where Wuhan is located, appealed this morning for masks and protective suits.

“We are steadily pushing forward the disease control and prevention ... But right now we are facing an extremely severe public health crisis,” he told a news briefing.

Vehicles carrying emergency supplies and medical staff for Wuhan would be exempted from tolls and given traffic priority, China’s transportation ministry said on Saturday.

More than 400 military doctors arrived in Wuhan on Friday night, including those experience tackling Ebola.

The city, home to 11 million people, is on lockdown, with residents unable to leave.

Coronavirus is more likely to affect older or middle-aged people, especially those who have had diseases before, according to Dr Nathalie MacDermott, a clinical research fellow in infectious diseases at Imperial College London.

For younger people, the virus “may be similar to having the flu”, she told Sky News this morning.

MacDermott also said the UK was well prepared to deal with the virus, and already had tests in place.

The European Centre for Disease Prevention and Control has issued a statement following the news that the virus has reached Europe, with three confirmed cases in France.

It said the development was “not unexpected” but “the fact that these cases were identified, proves that detection and confirmation of this novel virus is working in France, showing a high level of preparedness to prevent and control possible infections”.

It said: “Most EU countries have plans and measures in place to contain this kind of infection and Europe has well-equipped laboratories that can confirm probable cases, in addition to hospitals that are prepared to treat patients accordingly.”

It added that more cases in Europe were likely.

The hub is staffed by teams of seven clinicians working on rotation, who will support those flying in from China who feel unwell.

In a statement, Public Health England said its priority was to distribute information to those arriving from China.

“Most people who develop symptoms will get them after leaving the airport and so our priority is providing UK residents and travellers with the latest information to make sure they know what to do if they experience symptoms,” a spokesperson said.

“The NHS and PHE have an established plan to respond to someone who becomes unwell,” it added.

Chinese state media are reporting that a second hospital, with a capacity of 1,300 beds, will be built to tackle the virus.

Construction has begun and is scheduled to be completed in around two weeks.

Shanghai’s Disneyland resort will be closed from Saturday, and the popular destination of Sanya city has shut down all tourist sites to limit the possible spread.

Haikou city, the capital of the Hainan province, has started a two-week medical observation period for all tourists from Hubei, the region where Wuhan is located.

Thailand and Hong Kong each have five reported cases, Australia has four, and France, Japan, Singapore and Taiwan have three each.

Vietnam, South Korea and the US have two reported cases, and Nepal has one.

In the UK, 14 people have been tested for the virus but all came back negative.

Australia now has four confirmed cases of the virus, one in Melbourne and three in New South Wales. All four people had recently visited China.

The three men in New South Wales, aged 43, 45, and 53, had arrived directly from Wuhan, where the virus first emerged.

China’s ministry of finance and its National Health Commission are allocating a special fund for treatment and prevention of the virus. They’re also offering subsidies for medical staff tackling the illness.

Hong Kong’s chief executive, Carrie Lam, has said the response level has been raised from “serious” to “emergency”, the highest level.

A marathon has been cancelled, and new year celebrations scaled back. Primary and secondary school students will be given an extra two weeks holiday to avoid the virus spreading in schools.

Lam also said trains and planes from Wuhan would be blocked.

She said she would be personally chairing an interdepartmental committee to enable a faster response to the spread of the virus.

“We will not be frugal about the resources needed,” she said.