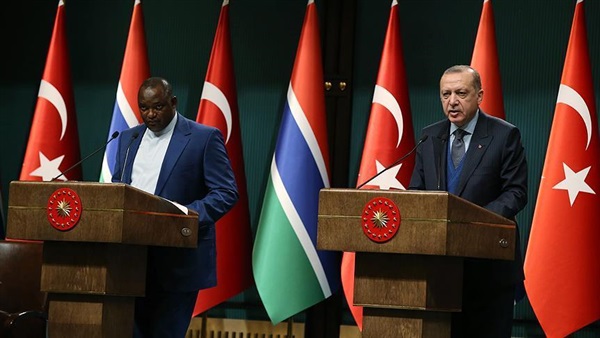 Turkish penetration in Africa is taking an upward trend, with Turkish President Recep Tayyip Erdogan announcing his visit to three African countries in the coming days, which include both Algeria and it is related to the Libyan file and the Sahel and Sahara region, as well as Gambia, which is a small African country that Turkey seeks to kidnap and control in West Africa, as well as Senegal, the most important country of the continent, especially in the west.

The goals of Turkish presence

The relationship of Turkey and its openness is growing to Gambia, the smallest country in the mainland of the continent of Africa and bordered to the north, east and south Senegal, and penetrated by the Gambia River that flows into the Atlantic Ocean bordering the country from the west.

This forms a Turkish point of penetration in the West of Africa and also an important focus in the movements of the Erdogan regime in the Sahel and the Sahara region and then the Arab countries (Mauritania-Morocco-Algeria-Tunisia-Libya) in North Africa.

In July 2018, the US Global Security bulletin on military and defense affairs stated that Turkish diplomats rely on exploiting the religious sentiments of Muslim populations in sub-Saharan Africa, led by Nigeria, Niger, Mali, and Senegal to weave Turkish networks of influence and interests on its soil.

Erdogan's regime has been chasing the movement of service founded by the Turkish preacher and dissident Fathallah Gulen who confirmed the reasons for the Turkish marriage to Kambia.

Turkish Foreign Minister Mevlüt Çavuşouglu expressed, in a joint press conference with the Gambian Minister of Foreign Affairs and International Cooperation Osaynu Darbu, in July 2017, that his country thanked Gambia for its cooperation in combating Gulen.

Çavuşouglu added that "work is going on to hand over all the schools affiliated with the terrorist organization to the Turkish moratorium on knowledge."

The ruling Justice and Development Party’s plans in Turkey to penetrate into Africa through armed groups came after the European Union’s repeated refusal to annex Turkey, which increased its need to search for the establishment of new alliances in strategic regions, but this caused the expansion of Turkey’s isolation due to the dissatisfaction of many countries of the world due to its unjustified interference with its internal affairs and support for terrorism.

Selling arms and taking the Gambia as a platform to support terrorist groups is important in the Turkish security strategy and its policy of penetration into Africa, as well as putting its eyes on the Arab countries in North Africa, especially Mauritania, in which the Brotherhood Reform Party operates, "Tawasul", which is one of the arms of Turkey and the Brotherhood in Mauritania.

Anatolia quoted Colonel Nihad Akturk, who is a Turkish military adviser to the Gambian President Adama Barrow, as saying that his country plays an important role in training and equipping the Gambian forces.

Acturk said that Turkish trainers came to Gambia with the aim of training nearly 7,000 soldiers in 2007, and 500 Gambian army soldiers received training in Turkey.

Acturk, who works as a director of the Military School to train the armed forces in the capital, Banjul, added that his country is setting an example for the Gambia institutions, noting that this year, Ankara donated military equipment to the 8,000-strong Jambian army.

Gambia may also, in light of its poor economic situation and thirst for investment and economic support, create opportunities for Turkey's penetration and control of Gambia. The port of Banjul-Para constitutes ideal conditions for the arrival and survival of ships. Ships take less than 6 days from Europe and 7 days from America by sea.

Çavuşouglu called on Turkish companies to invest in Gambia, noting the great potential they enjoyed and the willingness of their government to provide support to Turkish investors.

Gambia, with its location on the Atlantic coast, is a point of threat to European countries by taking a point of illegal immigration, which Erdogan's regime is good at trading against the European Union, as well as smuggling all contraband, weapons and terrorists to European capitals.

Gambia also constitutes a point for threatening Egyptian and European interests in the African continent, through Turkey's support for terrorist groups on the continent, in what constitutes a guerrilla militia in the service of Turkish interests.