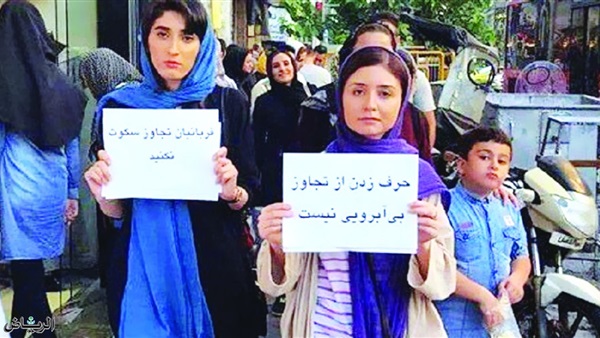 The fall of the mullahs ’regime is inevitably coming, in light of the period of oppression and tyranny that it imposes in the country.

Iran Wire website published a report documenting how Iranian detainees were tortured during the recent weeks’ protests through an interview with one of those newly released women, who revealed hideous psychological and physical torture methods.

The mullahs’ regime was not satisfied with the blood of the Iranian people. Repression and violations have become a way of life for them, as it cannot calm down without seeing blood and repression, as well as its practice of crime and killing, especially against demonstrators.

The detainee stated that the security officer threatened her that an "ISIS" element in the neighboring cell would be brought in to rape her if she did not make the confessions the authorities wanted from her, according to the Iran Wire report.

She also talked about the prison chief's participation with investigators in pressuring, despising and insulting her, directing insults and profanity, in order to subjugate her and break her morale to gain confessions from her.

She said, “The investigator took me to the interrogation room and told me: Now, we will bring a man from ISIS, and his wife is imprisoned with you, and you know how to conduct ISIS, and we will leave you with him in the room."

“Half an hour passed and I was trembling in that scary room for fear of the ISIS coming and I was thinking how I could defend myself. I had terror in half an hour that I had never felt before in my life. Given the precedent of the regime in crimes, I did not rule out that they would do this to me."

“It was very scary and terrible. This was one of the sexual assaults that took place against me during interrogation. "

Roya’s account of the sexual harassment practiced against her during her arrest and interrogation is among dozens of stories told by women detainees about their experiences in prison and the sexual assault practiced with them while in detention.

Roya says that her sexual harassment did not end with her threat to the ISIS man. She continues, “From the moment of my arrest, I felt insulted by investigators and prosecutors in that city to the investigator Shahruz Shah Mohammadi and Judge Muhammad Muqaisa just because I am a woman participating in the protests. They attacked me with obscene insults and vocabulary, for example, they asked me: “What are you doing with all this number of men, do not you have family?”

In a related context, Iran Wire transferred another testimony from a detainee called Azadah, who is one of the women who were arrested in the Karaj city cemetery on December 26, 2019, and explains how during the four days in detention she was subjected to verbal violence and the threat of sexual assault.

The intelligence service in Karaj arrested Azadah along with a number of other women, in the cemetery during a ceremony to revive the fortune "Boya Bakhtiari", a young man who was killed during the November protests.

Hours later, these women were handed over to the Literature Police, according to Azadah, where one of the officers there harassed them with touch. She added that during the interrogation process, she was subjected to verbal sexual assault by the man who interrogated her.

Azada said: “The policeman was browsing my mobile phone when he said to me:“ Do you not have a husband, if you had a husband, you would not have been lost in the street.”

She also confirmed that the harassment was not only limited to sexual harassment, but that she and other detainees who had no previous experience about the arrest, the interrogator terrified them in a humiliating manner.

Researcher in the Iranian file at Amnesty International, Raha Bahraini, revealed that an Iranian security officer tried to force a detainee to have sex and had already molested her in different areas of her body.