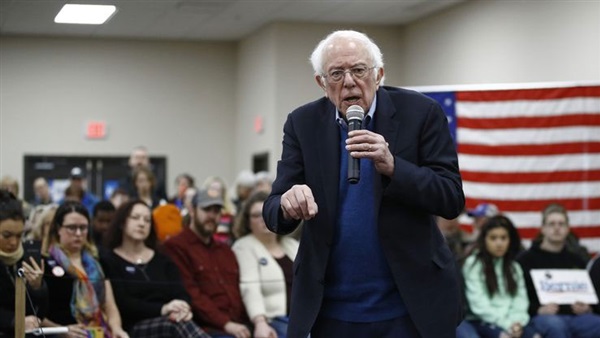 Elizabeth Warren has said Bernie Sanders told her during a private meeting that he did not believe a woman could beat Donald Trump in 2020, a version of events that Sanders vehemently denies.

In a statement issued on Monday evening, Warren offered her recollections of their conversation, a one-on-one discussion which took place in Washington at the end of 2018, when each senator was laying the groundwork for a presidential run.

“Among the topics that came up was what would happen if Democrats nominated a female candidate,” Warren said in a statement Monday evening, detailing her account of the meeting. “I thought a woman could win; he disagreed. I have no interest in discussing this private meeting any further because Bernie and I have far more in common than our differences on punditry.”

The back-and-forth represents a dramatic break for the leading progressive presidential hopefuls after a months-long truce. The escalating bitterness comes at a pivotal moment for both candidates, just three weeks before voting begins in Iowa and a day before Tuesday’s Democratic debate, in Des Moines. At the debate, the candidates will almost certainly be asked to clarify their different interpretations of the meeting.

Sanders have denied the story, reported by CNN on Monday.

In a statement, Sanders said it would be “ludicrous to believe” that he would have made such a comment and accused members of Warren’s staff, who weren’t present for the one-on-one conversation, of “lying about what happened”.

“What I did say that night was that Donald Trump is a sexist, a racist and a liar who would weaponize whatever he could,” he said.

“Do I believe a woman can win in 2020? Of course! After all, Hillary Clinton beat Donald Trump by 3m votes in 2016,” he added, referring to Clinton’s haul of the popular vote in contrast to the electoral college result.

Warren’s campaign remained silent for most of Monday in the wake of the CNN report. Faiz Shakir, Sanders’ campaign manager, had called on Warren to address the matter publicly.

“I know what she would say: that it is not true, that it is a lie,” Shakir told CNN.

During the December 2018 meeting, Warren told Sanders she was planning to run for president and the senators, who consider each other friends, agreed that they would avoid attacking one another in the ensuing battle for the party’s nomination so as not to further divide the progressive movement.

While friction have been building for weeks between the campaigns and their supporters, the candidates had so far refused to go after each other directly.

In recent months, Sanders has gained momentum as Warren declined from her summer high. But the race remains remarkably fluid, with Sanders and Warren locked in a tight race in Iowa. The latest Des Moines Register and CNN poll placed Sanders and Warren atop the field in Iowa, with the Sanders leading the pack.

Tensions built over the weekend, when Politico reported that Sanders’ campaign was instructing volunteers to tell voters wavering between the two progressive candidates that Warren’s popularity was limited to “highly educated, more affluent people who are going to show up and vote Democratic no matter what” and that she was “bringing no new bases into the Democratic party”.

Responding to the leaked script, Warren told reporters that she was “disappointed to hear that Bernie is sending his volunteers out to trash me”. In a fundraising email, her campaign asked supporters to respond if the “Bernie campaign’s description rang false to you, too”.

For his part, Sanders insisted he had “never said a negative word” about Warren, who he called a friend. He added both campaigns have hundreds of employees, who “sometimes say things that they shouldn’t”.

Sanders has long been skeptical of the Democratic party’s emphasis on “identity politics” but the issue has been particularly fraught in a field shaped by younger and more diverse candidates.

In the December debate, Sanders was asked to respond to Barack Obama’s comments that the world would be a better place if there were more female heads of state and that many problems are caused by “old men not getting out of the way”.

Sanders quipped that he was not only old but “white, too”. Then he joked that it might be “self-serving” but he disagreed with the former president.

“The issue is where power resides in America,” he said. “And it’s not white or black or male or female. We are living in a nation increasingly becoming an oligarchy. We have a handful of billionaires who spend hundreds of millions of dollars buying elections and politicians.”

What started as the most racially diverse and female primary field in history has shifted dramatically. On Tuesday, no candidates of color will be on the debate stage. All of the leading candidates are white, and only one is a woman.

The field’s dissipating diversity was underscored on Monday by the departure of Cory Booker, who is African American, just over a week after Julián Castro, the only Latino presidential candidate, ended his campaign.

The Minnesota senator Amy Klobuchar, the only other female candidate who will be on the debate stage Tuesday night, has been increasingly vocal about the role of sexism and double standards in presidential politics.

Last month, she wondered aloud on the debate stage whether a female candidate with as little experience as Pete Buttigieg, the 37-year-old former mayor of South Bend, Indiana, would have qualified.

“There is a lot of talk today about if a woman can beat Donald Trump,” Klobuchar wrote on Twitter, responding to the CNN report. “As I said on the debate stage, Nancy Pelosi does it every day.”