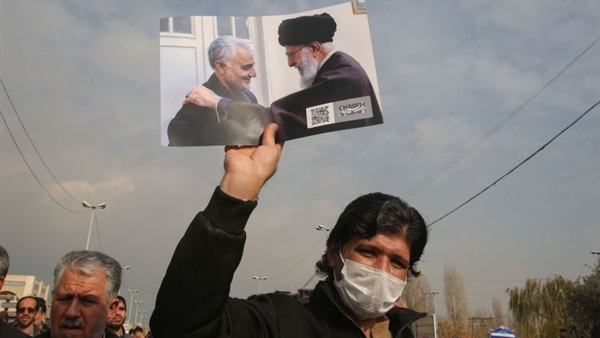 Iran's Parliament Speaker Ali Larijani told lawmakers on January 7 that Supreme Leader Ali Khamenei has authorized the allocation of 200 million euros of additional budget to the Qods Force in the next two months.

Larijani made the remarks before a triple-urgency bill called "Counter-Measures Against US" was put to vote.

The aim behind this decision is to expand terrorist operations and spreading war across the region, especially in Iraq, Syria, Lebanon and Yemen.

This announcement clearly indicates that the killing of top general Qassem Soleimani changes nothing regarding how the Mullahs and their regime operate, as it will keep wasting the country’s wealth to spread war and terrorism while the majority of Iranians live below the poverty line.

Iran has vowed a harsh revenge for the death of Soleimani, who was the architect of Iran's extensive network of proxies in the Middle east and beyond.

Tensions dramatically escalated between Tehran and Washington following the targeted killing of General Qassem Soleimani and Abu Mahdi al-Muhandis, the second-in-command of Iraq’s pro-government Popular Mobilization Units (PMU), in US drone attack in Baghdad on Friday.

Moreover, the regime does not only plunder oil revenues, but robs and spends Iran’s wealth and resources in suppressing people, exporting terrorism, spreading wars and launching nuclear and missile projects that contradict the interests of the country. This is the main cause behind the economic crisis and the tragic problems that the Iranian people face every day.

The Iranian people and the peoples of the region believe that Qassem Soleimani should have been eliminated years ago because he was the "number one terrorist in the world."

It is the right of the Iranian people and the Iranian resistance to struggle to impose more punishment on the regime of the mullahs regime and its figures, attract the world on their side, and to have the support of the peoples of the world and the region, especially in Iraq, Syria and Lebanon.

The day after the mullahs assumed power, freedom was eradicated from Tehran, lots of freedom-lover Iranians were killed  and numerous massacres were committee by Khomeini and his regime, since then, the voice of Iranian resistance had been muted.

“Four years ago I warned the threat of the mullahs’ meddling in Iraq is 100 times more dangerous than its nuclear ambitions,” Iranian opposition leader Maryam Rajavi said in a speech on June 30, 2007 in Paris.

Although Iran failed to obtain nuclear weapons, Tehran’s destructive meddling and crimes carried out by affiliated Shiite militias in Iraq, Syria and abroad are far more dangerous. This campaign has taken the lives of hundreds of thousands of people throughout the region, leveled cities and displaced millions.

The Iranian resistance believes that the war against terrorism and terrorist groups such as Daesh and others is necessary, but this is not enough, as the official sponsor of terrorism in the world and the head of the snake must be cut in Tehran in order to establish stability and security in the region, restore the rights of oppressed peoples and eliminate terrorism. Not to mention liberating Iran and its people form the most terrifying dictatorship in the history of the region.

Observers and experts have further affirmed that every authority or government that wants to eradicate terrorism, spread peace, equality and peaceful coexistence must immediately join the resistance against the Iranian regime and take the necessary measures to serve the cause, which they said “must not be delayed any longer.”